When I first heard that Super Group Sons Of Apollo (SOA) was making an appearance at The Varsity Theater, I was like, that’s definitely one that I’d like to check out! They were in town to support of their debut album Psychotic Symphony. 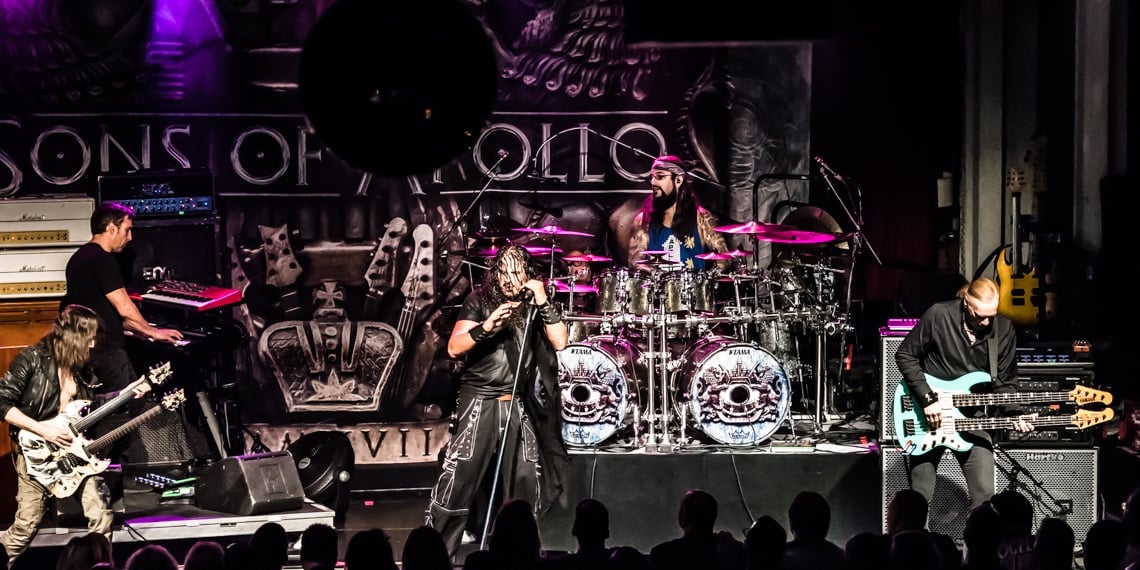 How could you not like having a great Star-Studded group come to play The Varsity Theater? It was unfortunate timing as SOA came to town the same weekend as a small (sarcasm) rock festival was playing to the East of the cities. This ultimately led to a small crowd of maybe three or four hundred. Even more unfortunate was that so many people missed one hell of a rock show. Honestly, this is one of the better rock shows that I’ve been to in recent memory.

From the opening cover of Van Halen’s “Intruder” all the way through the end of the nearly 2-hour show, it was filled with everything you would expect from these all-stars. Great vocals from Soto, superb guitar solos from Bumblefoot, who led the way with the theme from The Pink Panther. Don’t forget to throw in a keyboard solo from Sherinian and a drum solo from the crowd favorite Mike Portnoy to round out the night.

Music? Yep, plenty of that too, whether it was “God Of The Sun” or “Signs Of The Time” from the Psychotic Symphony Album to start the show or digging in with “Just Let Me Breathe” and “Lines In The Sand,” a couple of personal covers from Dream Theater. A great cover of Queen’s “The Prophets Song/Save Me” was thrown in just for good measure. They finished the night with (what I would say is) their most popular song, “Coming Home”.

Whether you came for the star power, guitar, drums, or just because they have some kick-ass music, you got what you wanted. This wasn’t a show full of filler or theatrics. Nope, this was a definitely a meat and potatoes type show. It was a great blend of music along, with great leadership from Jeff Scott Soto in guiding the crowd throughout the night.

With all these big names in one band, it’s a hard task to perform as a unit while still showcasing each individual member. This they managed quite well, although some moments felt elongated at times. My two favorite parts of the night were definitely Bumblefoot’s Solo (featuring the Pink Panther Theme) and Portnoy on the drums (I love the drums!).

It’s just too bad that so few managed to see these guys in action. Next time they come to town I might just be the first in line to get a ticket. Hopefully it’s not when a major rock festival is playing nearby.