No artist has emerged from Minnesota and walked their own private catwalk quite like Prof. After spending the early part of the 2010’s cultivating a strong, loyal following, and distributing nearly 200,000 records through his own imprint, Stophouse, his 2013 signing to Rhymesayers Entertainment helped propel him to the next stage of his career when he released his landmark 2015 Rhymesayers debut, Liability.

Additionally, his annual self-headlined Prof Outdoors festival has repeatedly sold out a 4,000+ capacity venue four years running. While there’s been a perception that the eccentric Minneapolis MC is out of control, Prof’s undeterred, unwavering commitment to his mission has revealed the detailed craftsmanship behind the perceived chaos. Today, as his latest album title states, the newly sophisticated Prof is more accurately referred to as Pookie Baby.

While Prof might be best known outside of Minnesota for his high energy and unruly live performances, with this album he pulls back the curtain, inviting the listener to join him for the most private of moments of his life, turning the record into a high-class experience.

This new Pookie Baby persona is all cleaned up, teeming with unbridled sexuality, and suited with a myriad of styles that run the gamut from triple-time Chicago drill to emotive, bluesy crooning. Pookie Baby helps clarify where this passion and the essence of Prof come from, and he’s never been better dressed for it.

In preparation for the release of the album, I was given the opportunity to sit down with Prof, or should I say, Pookie Baby, to take a listen to the new record, as well as ask him a few questions about the inspirations behind the album, how working on this project may have been different than those in the past, his relationship with Strange Music, and a handful of other things.

MIM: As the press release for the album states, the “newly sophisticated Prof is more accurately referred to as Pookie Baby.” Who originally came up with your new moniker, and why did you choose it as the title for this album?

MIM: Talk to me a little bit about the writing and recording process of this album. Was there anything you did differently when comparing it to other albums?

Prof: Yeah, man, this album was the most different. This was the biggest step in a different direction creatively that I’ve ever had. I got my three favorite beat-makers together, flew some in, drove some in, and we just locked ourselves in a basement for, you know, eight days and I kind of played producer. I picked instruments here and there from these guys. “I like this.” “I like that.” “Hey, why don’t you pass this over to him.” “Can I get a drum loop for this?” So the beats came from a very cohesive place, that’s why the record feels cohesive you know, cause three dudes made the whole thing.

The way I wrote to it was also different. I kind of freestyled a little more than I usually do, and I came up with the melodies and the rhythms first. I’ve never done it that way before. It was a real smooth process, though, and I’ll be doing it that way going forward as well.

MIM: Yeah, and I can say that definitely came across listening to the album too. Something I’ve always liked about you is it seems like you like to focus on the album as a whole, and not on a single-by-single basis, so it does feel like everything flows together and it’s a really cohesive project.

MIM: There are only two people featured on this album besides yourself. Your label-mate Cashinova appears on the track “No,” and on a track titled “Be Around,” there is a feature from St. Paul native, and recent contestant on The Voice, Ashley DuBose. How did this collaboration come about, and what was it like working with Ashley?

Prof: You know, I always like to keep my ear to the streets and on the heartbeat of the city, so I go to these shows, these showcases, and performances. I just randomly went to a show out at The Cabooze one night, a club in Minneapolis. There were about fifteen people on the bill, lots of acts, I just wanted to see what was going on. There wasn’t a lot of people there, you know what I mean, it was more just people showing out and wanting to be seen, it wasn’t like a grip of fans or whatever.

[Ashley DuBose] just got on stage, and I saw her, and it was, like, undeniable. My jaw dropped and I, like, looked around and was like, why isn’t everyone stopping what they’re doing? It’s disrespectful! Stop ordering that beer, stop ordering that drink, you gotta hear this!

She is world class man, hearing her live was, it was an experience man. After that, I just reached out to her and we got to work. I didn’t even know about The Voice until after when we started working together.

MIM: Every day leading up to the release of this album, you have been releasing a new video in your Undressing Pookie Baby series, a series of videos which features you breaking down the meaning behind and significance of each song on the album. What was in the inspiration behind doing this, and is it something you hope to see more artists doing in the future?

Prof: It was actually an idea I got from someone who works at Rhymesayers, one of my managers, Jordan. I sort of did something similar a long, long time ago on a mixtape I release with Slug, he asked me questions sitting in my basement at the time. I don’t know, so often people come up to me and ask “whats this song about?” It was nice to get it out of the way and just tell them.

MIM: Exactly, I think particularly in this ever-changing music climate we are in, it is so easy for someone to misunderstand the meaning behind a song, so for me, it’s nice to hear, for lack of a better term, from the horse’s mouth what a song was actually written about.

Prof: You know, that’s another thing, art is for the viewers, for the listeners. If you have your own interpretation of it, and it makes you feel that way, then that’s what the song is about. It’s about whatever you take it in as. I can try to guide you on a path, and that’s exactly what this series is, but ultimately its up to however you want to take it.

MIM: As the press release states, your wild live shows and rigorous touring schedule resulted in more than a few injuries, a few of which even required surgery. Because of this, can we expect any changes coming to your live performances?

At first, you know, I took a long break, well, actually, it wasn’t that long. I healed up. I had back surgery, I had knee surgery. You know, I’ve started taking my body more seriously. I eat better, I workout more, you know what I mean? I was living fucking crazy. On the road, I don’t smoke weed, I don’t smoke cigarettes because I’m trying to hit these notes that I sing and shit like that, so I take more care of my body on tour than I usually do.

Don’t get me wrong, I still get drunk and wild-out you know, the shows are still crazy, they’re dangerous, they’re diabolical. It’s more behind the scenes now.

MIM: Your last album Liability had a feature from Tech N9ne on it, and Murs, Rhymesayers alumni currently signed to Tech N9ne’s Strange Music label released an album about a month ago which had you featured on a song called “G Lollipops.” Can you talk to me a little bit about the relationship you have with Strange Music, and maybe let us know if we can expect more collaborations in the future?

Prof: Yeah man, you know, those guys, they’re my fucking family! Tech is the shit! He’s the most famous person I know who is still absolutely, 100{a43c2147d37bcf8b898f59ebaaf066dc60bd9fbfc7430ae40ed3f9adbaab469e} down to earth, real, and not full of himself. He’s a real-ass motherfucker. So, you know, I’ll know him for the rest of my life. I’ll know Murs, you know, I love Murs. He’s one of my best friends. Even the people on the label there, I met Mackenzie, I met Travis, you know, the owner, they’re all homies. I can almost guarantee I’ll be working with them more in the future.

MIM: One last question for you here Prof. I’m the kind of guy who likes to get into a mindset and has a little bit of a routine when I listen to an album for the first time. What do you think the ideal situation is for someone who is going to listen to Pookie Baby for the first time?

Prof: Good headphones! Uhm, smoke some weed. If you don’t smoke weed, maybe have a few drinks, you know. But good headphones, weed, and go for a walk! That’s it. (Pause) Or, you know, riding around in a car maybe? That’s always good too if you’ve got a good system. Headphones and a walk, though. That’s how I take in most of my music. I’d highly recommend it.

MIM: Alright, well, I think that’s all I’ve got for you. I guess on a personal note, who do you want the Wolves to play in the first round?

Prof: I mean, honestly, I’d really love to grab that #5 seed if possible and play Utah. I guess, they’ve been winning games lately too, though. I think that’s the only way I see us getting to the second round though. I definitely want to avoid, you know, Houston and Golden State. Portland or Utah is who I want.

MIM: Yeah, any way you can avoid Houston and Golden State is definitely ideal! Any moves you want them to make in the offseason?

From cynically skewering the authenticity of artistic statements, as on “I’ve Cooked Crack Before”, through the heartfelt reminiscence of “Designated Hitter” recounting the place marijuana holds in his happier memories, to ultimately knowing how he wants to be remembered once he’s left the world’s stage, Pookie Baby is just as much the crowd-pleasing party animal’s moment of prideful self-reflection, as it is the blueprint for making the most out of life while navigating the hardships.

Pookie Baby will be available in stores and online everywhere on Friday, April 13th. To celebrate the release, Prof will also be doing a special in-store performance and signing at Fifth Element starting at 6:00 PM.

Prof will also be hitting the road next week, with his Pookie Baby tour kicking off on April 19th at the Red Rocks Amphitheatre in Morrison, CO. The 26-date tour continues through May, wrapping up with Prof hitting the stage at the Minnesota State Fairgrounds as a part of this years Soundset Music Festival on May 27th. 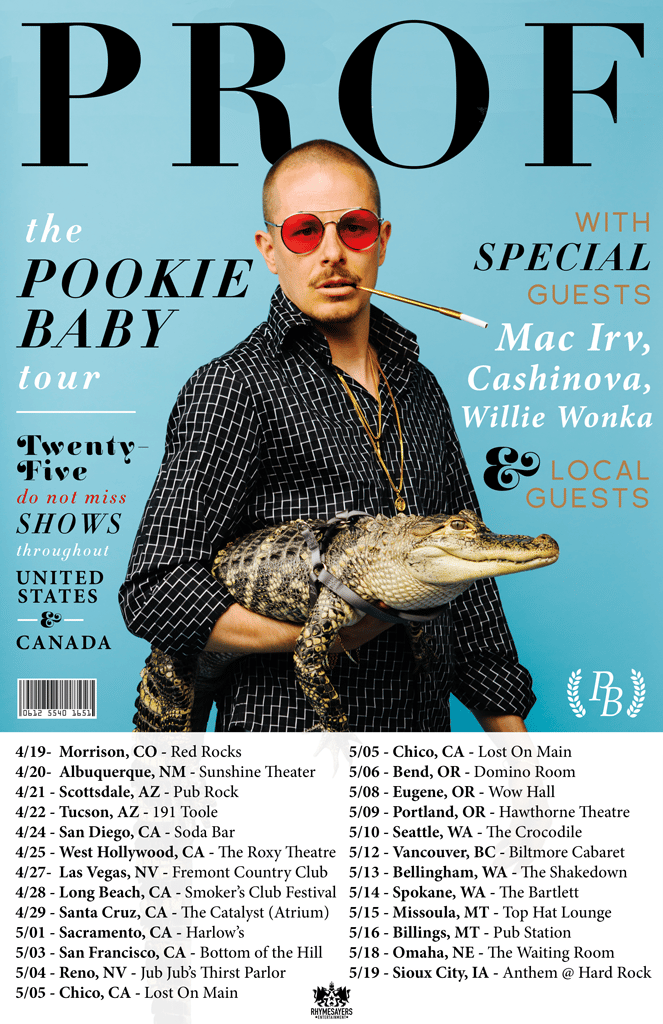 The Minnesota Timberwolves begin their quest for the NBA Finals at 8:00 PM on Sunday, April 15th against the #1 seeded Houston Rockets.