Tonight at Treasure Island Resort, it was a tale of big and small. The small town of Goodhue won the chance for some of their best and brightest to go on stage with one of the biggest bands in the world…Foreigner. 17 kids who make up the Goodhue Public School Chamber Choir, led by Director Emily Shores, earned the right to sing the 1985 Billboard #1 hit “I Want To Know What Love Is” with the band. In addition to the opportunity for the live performance, Foreigner also donated $500 to the Goodhue Music Program. Hats off to Foreigner for their support of the arts in a time when Music Program funding so often is the first to get slashed. 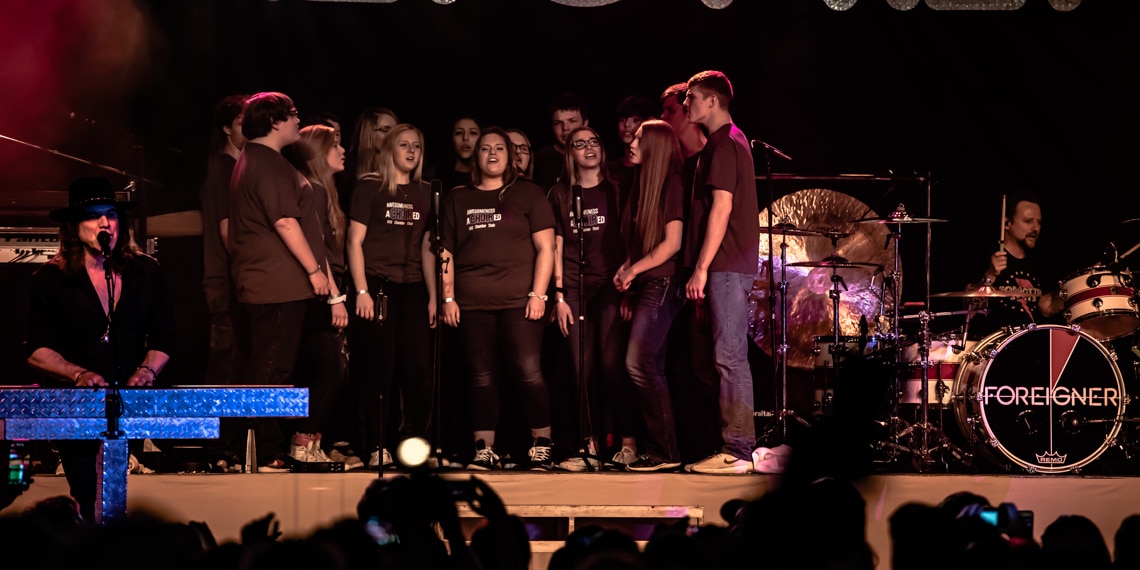 After finding out about the opportunity through social media and flyers through email, The Choir Director asked the kids if they knew who the band Foreigner is. Much to her surprise, many of the kids did. A few of the kids, who were raised on 80’s music like Def Leppard, REO Speedwagon and, of course, Foreigner, were actually big fans and were enthusiastic about a chance to rock with them. The two songs I had heard were “Jukebox Hero” and “Cold As Ice.” Not surprisingly, they happen to be two fan favorites. As you can imagine, the kids were very excited to be heading on stage to sing with the legendary rockers, and then have an opportunity for a meet and greet with the band afterward. Can you blame them for their excitement? Nope.

This incarnation of Foreigner is an absolute joy to watch. Current lead singer Kelly Hansen (since 2005) said, “Everything you hear is the way it should be, with no synthesizers, no auto-tune or correction.” Now, if more bands would only follow suit, as imperfections can lead to some memorable moments at a concert.

Foreigner hit the stage at the sold-out venue, starting out the night with “Double Vision,” “Head Games,” and “Cold As Ice” as the lead singer Kelly Hansen snuck into the audience for a little crowd participation. The TI crowd got to feast on hit after hit from this all-star lineup that featured Kelly Hansen, formerly of the band Hurricane; Jeff Pilson of Dokken; Tom Gimbel, who toured with Aerosmith; Mike Bluestein, who has played with many big acts including Stevie Wonder, Boston and The Who; Bruce Watson who has played with Acts like B.B King, Rod Stewart and Elton John; and, of course, the only original member (at this time), co-founder Mick Jones.

The crowd didn’t have to wait for the hits to start, it was literally the greatest hits from beginning to end, featuring songs like “Waiting For A Girl Like You,” “Dirty White Boy,” “Urgent,” and, my favorite, “Jukebox Hero.” 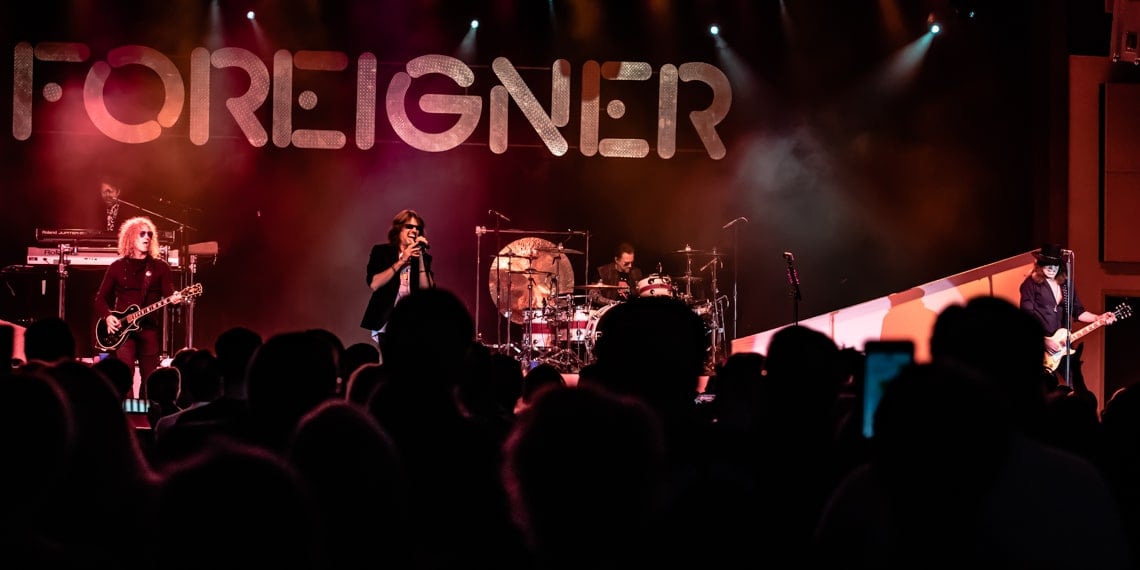 Between two songs, a wonderful keyboard solo lead into my favorite thing at most shows (including this one): a Drum Solo. Percussionist Chris Frazier put on a nasty solo that included a soaking good time. He drained parts of 2 water bottles onto his kit as he was playing, making for a large, spectacular spray throughout the rest of the solo.

The band momentarily left stage leading up to the encore, which consisted of “Long, Long Way From Home,” the final song of the night, “Hot Blooded,” and what a lot of people were waiting for: “I Want To Know What Love Is” featuring The Goodhue Public Schools Chamber Choir. These young men and women sing in front of people all the time, but they had to be nervous as they headed onto the stage in front of the sold-out crowd. Even so, if they were nervous, you’d never have known it! They crushed it. Congratulations are in order, it was a great job by everyone.

As the night finished, Treasure Island gave away an electric guitar, signed by everyone from Foreigner, to one lucky fan who was drawn at random. I’m not sure who won, but congratulations to them. Not many places give away a guitar at the end of the night. Many might put one up for auction, but not this time. At Treasure Island, everyone that had a ticket to the show had a chance to win. This is a pretty cool way to treat your customers.