Once shelling out over 75,00 tons of ice each year, ICEHOUSE now portions out ice in glass sized doses. The venue lies in what was originally the loading docks to the old Cedar Fuel and Ice. Ice harvesting is a winter task of collecting ice from lakes for storage. (Think Disney’s Frozen opening scene.) The large masses of ice were then used for sale or as a cooling method. A rare job today, it was extremely common before refrigeration and air conditioning. In later years the location was part of Icehouse Studios, which recorded audio and video for the Minneapolis area. Not only keeping the spirit intact, much of the original structure was preserved.

The original brick and wood ceiling stayed in place and was designed into the venue. The industrial statuesque feeling is a direct tribute to the places that owned the space before. Co-owner Brian Lieback shares that the wood ceiling was a conscious choice to improve the room’s sound quality, compared to so many standard tin ceilings around the Twin Cities. As a tech guru, Brian has a strong background in lighting, production and sound. This shows in the expansive PA system and intuitive stage lighting. The venue has the ability to make quieter music, like jazz, sound intimate and close; while expanding for larger elements and feeling the thump in all corners.

When walking into the space, the three-quarter opened, large stage is a huge focus. Gorgeously built with reclaimed Douglas Fir from an old snow fence in Wyoming, tables surround the edges. The sight lines open up and its multiple angles make every show experience a bit different. A large burnt orange velour curtain, colored like an Old Fashioned, sits behind the stage and can be opened for video presentations. There’s a beautiful side room, away from the music, for dining, with huge windows looking out on their patio and courtyard. The walls have housed various art installations over the years. Artwork from Billy Martin, drummer for Medeski Martin & Wood, is one example of past representations. Most of the sound engineers and staff are musicians themselves, and with this information you begin to see a trend and theme in the venue.

We would be negligent if we didn’t mention the other half of ICEHOUSE. Business partner and Chef Matthew Bickford has curated a complete menu based in American comfort food. From sirloin to burgers to gnocchi to hot dogs, the full list is an absorption of senses in just reading the menu. There’s a brunch menu on the weekends, pastries for dessert, and macarons for a small takeaway treat. With tons of gluten-free and vegan options, along with a kids’ menu, all of your bases are covered. The quality of the food and selection helps to push you further from away from a basic meal. It stretches your palette and helps satisfy a more fancy option, while keeping it affordable.

The venue has two prime spots to fully enjoy Bickford’s creations. The Chef’s bar gives you a close seat to watch the work. There’s a $50 (10) course tasting menu or a $35 (5) course option, all with the ability to pair drinks with each course. The Chef’s Table is a more unique dining experience as you sit next to the kitchen. Starting at $75 per person, Bickford and his team prepare a custom menu from scratch for the table.

Finally, without being stingy on praise, if you’re looking for an exceptional cocktail, ICEHOUSE can compete with anyone. The extensive list of premium whiskey and unique “sipping shots” menu are quite popular. There’s a diverse list of drinks options for happy hour, brunch, or late night. Watching the bartender make your cocktail is the perfect show for when the stage is quiet. 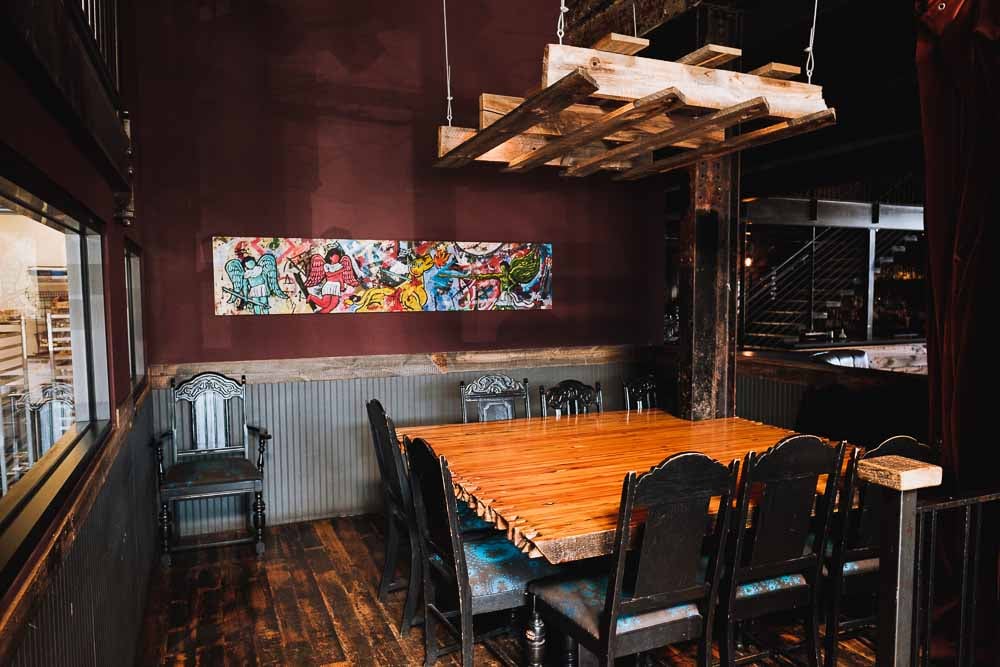 ICEHOUSE showcases 8 different residencies. Monday night jazz continues to be a staple highlight, while Ultrasuede and the SPCO have provided exclusive opportunities to witness music. Revival Brunch takes brunch to a new level by featuring live music while you eat. These residencies prove that the venue is a place where musicians want to play. Musicians want to attend shows because they respect who’s playing on stage. It’s a trend and cycle that Brian Lieback has cultured in the 7 years since ICEHOUSE opened. You see this in the staff themselves. Most are musicians in their own creative projects and love coming to work because they are inspired by the community of artists. All this transcribes to a vibe where even non-musicians respect and feel the admiration for music in the venue. Catching a show feels like you’re part of the musicians’ inner community. Although they aren’t dishing out 75,000 tons of ice, they are providing some very cool services for the Twin Cities.


Although Ryan Mach took over engineering duties in the summer of 2015, his experience with ICEHOUSE started much earlier. He initially started coming to the venue because all the artists he respected and wanted to see played there. He noticed Alex Proctor would be running sound almost 7 nights a week. One day he finally was like, “Dude, why are you always here. Do you need a night off?” So he started filling in. As the previous engineers left to pursue touring opportunities, Ryan left a booking gig at the Amsterdam when Brian asked if he wanted the job.

“Every job I’ve worked in the music industry I’ve always viewed from the lens of a musician first,” states Ryan.

Booking was a great way to glean insight into the system, but beyond that, it became all about the numbers. And when a night didn’t pull large attendance, Ryan would take it personally, thinking he did something wrong.

As a studio AND live engineer, Ryan loves what it does to his brain. His experience in the live environment makes him work faster in the studio, which is very valuable. He then listens differently at a live show, just due to the endless ability to carve the sound. The studio side gives him knowledge on ways to affect sound and utilize all of the tools at his disposal. It also helps with signal flow, while live sound teaches him how to work quickly and efficiently. It’s a good contrast between the two.

The Midas M32 digital mixer runs seven full range EV speakers, two 18″ subs under the stage, and four EV monitors. Ryan shares that although the room is not an effect or an instrument, it does play a huge part in how you approach a mix. It’s a very ‘live’ sounding room and requires some specific finesse when dealing with all of the zones in the room. The Midas board is laid out to work in a quick way, assisting Ryan as he can roam the room with an iPad. Depending on where you sit, it feels like a different experience. Side booths and the upper level can very much feel like a VIP experience, so the challenge for him is keeping each area consistent.

Like many Minneapolis musicians, Ryan says ‘yes’ to as many fun and interesting projects as he can. Currently, Har Mar Superstar occupies much of his time, but Fort Wilson Riot, and Joey Ryan & The Inks are just a few of his various endeavors. There’s a strong passion for musical details in everything he does at ICEHOUSE. As he shares, it’s this intention that connects him. “Brian’s passion is in pretty much every detail here. I think that’s something that drew to me to this place right away.”

For many sold-out shows, the tables are held for dinner reservations. Book ahead, grab some food, and enjoy a packed show from a table. Also find space to enjoy the “sipping shots” which, at $5, are a steal.


“The first time I stepped foot in ICEHOUSE to take photos in the space, had to have been about 3 years ago. Local band Reina Del Cid was kicking off their residency there. At that point, I was emailing and messaging artists with the faint hope of being granted photo permission. Icehouse became one of those small, classy venues that almost always welcomed me through their doors and a home for local acts that were quick to express gratitude for the images I captured.

One of the most unique performances I’ve seen at ICEHOUSE was Julia Floberg’s album release of “Aporia.” Her solo, concept album was a combination of cello, spoken word, and vocal harmonies. The live theatrical performance with fifty minutes of choreographed dance, was mournfully captivating and the personal stories that inspired the album, that I was privileged to talk to Julia about before and after the show, even more awe-inspiring.

Of course, I have to mention the high-powered, female-fronted acts I have experienced such as Kiss the Tiger and Lissie. Last spring, shortly before her release of Castles, Lissie came up from Iowa with her family and made a pit stop in Minneapolis early in her tour. Her mom sat at a table front and center, lending Lissie sips of her red wine between songs. Lissie is quite the entertainer. She chatted about anything from her dog–whom inspired her label LionBoy Records–and her obsession with re-watching “The Office,” to her quirky watercolor selfie hobby. Her tipsy ramblings rendered laughs and plenty of shouts from the more rambunctious tables up front. It felt as though she had transformed the stage into her living room, and we were all hanging out at a jam session.

Read the full review of the show here.

ICEHOUSE tends to evoke that kind of atmosphere. The smaller space allows for a more personal concert experience. Rubbing shoulders with people at the back bar, servers weaving around candlelit tables stage front, bartenders brewing up bougie cocktails to my right–the venue is one of my favorites for smaller artists getting their feet wet or more established artists returning for a residency.”

Full schedule can be found here.

Music venues are the lifeblood of our community. By providing musicians the opportunity to showcase, collaborate, and experiment with their craft, venues are essential in their development. This series will continue to promote and support our local venues across Minnesota. Please see the previous articles below and go support local music. Our hope is these articles show the importance of supporting venues and places where creativity can thrive.

The Hook and Ladder Theater