The first time I saw Julia Floberg and the Delphia Cello Quartet was on a lazy, summer evening nestled in the back of Lowertown’s Black Dog Café. A simple, red, velvet curtain cascaded behind them, Christmas lights framed a quaint stage, and a tip jar to the right.

The café assembled a small cluster of tables, where friends, family and passer-byers sat with a cup of coffee or glass of wine to watch the group perform an eclectic mix of classical and contemporary cello arrangements. All female cellist adorn in long, flowing dresses, respective cellos perched between their legs, the four began to settle into position. Bows drawn, they all looked to Julia. And she signaled with a nod. 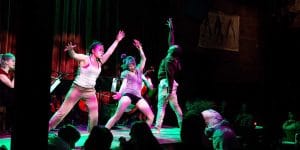 Now, nearly a year later, the Delphia Cello Quartet found themselves in a different arena, on Icehouse’s main stage. This time, accompanied by a quartet of dancers, their own personal lighting guy, and a captivated audience. Without any formal introduction or greeting, the group immediately began to play and the dancers erupted with a flurry of movement.

“I didn’t want to say anything to start,” said Julia, “Partially because I was so nervous and also because I just wanted to start. We’re going. You know we’re here. It’s called ‘Aporia,’ and this is what it is.” 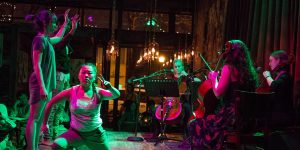 This collaborative group of artists–cellists, singers, dancers, poets–had worked long, laborious hours preparing for the release of “Aporia” and Julia’s “spark” from last May set fire to Icehouse’s stage. Inspired by Bella Yaga’s fusion of folk-styled music with storytelling–a group led by musician Anna Johnson–Julia began to weave together songs she had written in her mid 20’s to create the “fabric” of “Aporia.”

“I saw one of their performances May of 2017 and was deeply moved and that is was really lit the spark to start this whole project. I saw it and I was like, ‘Yes! This is exactly what I want to do.’ I was so deeply moved by it,” said Julia. 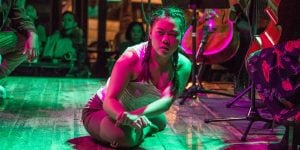 The word itself, “Aporia,” means an irresolvable internal contradiction, or the expression of doubt. A term that this group of artists, under Julia’s direction, illustrated through a tumultuous, overarching narrative that is as severe as it is tender.

A solo, concept album that is a combination of cello, spoken word, and vocal harmonies, she described “Aporia” as a coming-of-age story, a story for anyone who finds themselves sinking into a dark place, finding a way to move toward the light again. 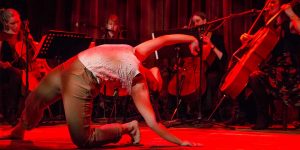 “You might be raised with a certain set of ideas about the world, but then you yourself begin to be able to articulate your own ideas. All of a sudden, you start to call into question everything that you’ve been taught to believe about love, about relationships, about life and death, even about faith,” she said, “That’s where that whole concept of doubt comes into play. As you become your own person, you start to doubt all the premises that you’ve built your life upon.”

We all have this underlying bedrock of beliefs and values that is built by the “stones” of past experiences. However, experiences–good or bad–can also form fissures in this foundation. Julia’s narrative takes us through these moments of consolation and desolation, forcing us to ask questions–to be vulnerable. How ironic is it that many of us (myself included) often attempt to disown our difficult stories to appear more “whole” or acceptable? But, isn’t our “wholeness” defined by the integration of all of our experiences? 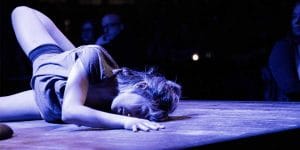 Julia did not hesitate to put her dark thoughts front and center, translating them into something concrete via the mediums of spoken word, music and movement. The concept of “doubt” was personified as a “creature of dark intentions” that overcomes the mind and “rides the thought waves as a malign passenger.” The opening act reverberated with a low, eerie bass, Julia’s monologue describing this “creature.”

The dancers were asked to take on a character for the live performance and choreograph fifty minutes of continuous movement. The show was more of a dance-theatrical piece, all set to Julia’s quartet cello arrangements, and guided by poetry and song–an intimate eight-person collaboration. The narrative of the album is highlighted by four characters: Diana who is dealing with a medical health crisis and chronic illness, Mary who is struggling with mental illness, and then the duet of the couple, representative of an impassioned, destructive relationship. 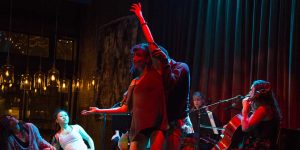 “We came into it with that vision, what the narrative was. And that she wanted us to take on a role, a character,” said dancer Julia Gay. “You really feel a visceral manifestation of the creature that she’s talking about. The anxiety, the self-doubt, the forces that really drive these moral, existential questions. And I think seeing that, and translating that to action with the body and movement, makes so much sense because it’s already so visceral.”

The two Julia’s–cellist Julia Floberg and dancer Julia Gay–first crossed paths back in 2016. The two were both selected as apprentices for the Creative Change Makers Apprenticeship Program, a ten-month program run by David Kang. The cohort of six artists–all from different creative disciplines–were brought together to learn how artists can become more involved in the community. 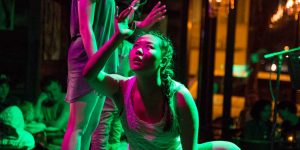 “We just got along so well that I wanted to collaborate with her on a project,” said Julia Floberg, “I thought that music and spoken word wasn’t going to be enough. I really wanted to incorporate movement. So, she was my person who then introduced me to these three other dancers… Julia Gay was the connector”

As a way to kick-off the project and showcase what it might eventually look like, the two of them created a music video together titled “Diana.”

“She reached out and told me she was doing this music video, and that there was going to be dancing in one of them,” Julia Gay recalled, “She sent me the music to listen to and said, ‘Really, just feel free to improv or do whatever.'” The two of them proceeded to run around Boom Island with LoonarCity videographer Jack Davis, every step improvised. That first day filming “Diana” led to a deeper conversation about Julia’s idea for a bigger project. Julia Gay responded, “you know what, I’ve got the people.” 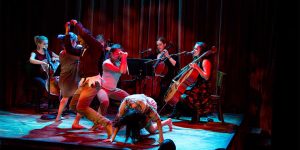 She reached out to some friends of hers who are dancers–Lizzette Chapa, Peace Madimutsa, and Juliette Myers–and asked them if they would be interested in working on this project together. They jumped on the opportunity and this newfound kinetic extension of the music and spoken word made these characters come alive.

“I think we all took our own roles of leadership in the creative process and really made it our own, our own dance styles. I know the Anayan dance form of contemporary Indian really does show in my movements, and Peace’s flow and choreography was very much based and grounded in hip hop dance. It was really cool to be working with people who’s dances were of a very diverse style of movement… we all brought in our own personality and way of moving,” said Julia Gay. 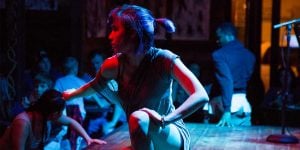 Reflecting on Julia Floberg’s heavy-hitting poetry, soulful vocals and dark, ominous instrumentals, the dancers were challenged to channel very real feelings of anxiety, fear and loss. Julia Gay referred to it as a “meditative exercise” of sorts–a palpable reminder that while we all have a propensity towards a particular form of expression, we all share a universal need to feel, process, and express. 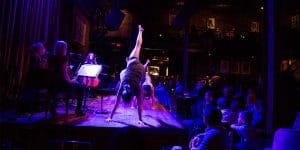 I think we are healthier people–in mind and spirit–when we take the time to cycle through. Feel. Process. Express. Repeat. I imagine the process of creating this album allowed all of those involved the opportunity to re-find solace and balance, and the performance an opportunity for the audience to experience Julia’s narrative and simultaneously their own. 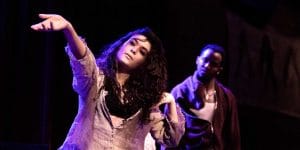 “What was so moving for me was that several different people who were at the show ended up telling me about associations that they had with different parts of it. Even though so much of that material was so personal, so many deep and emotional thoughts I felt, my hope was that it would speak to something that others had experienced,” said Julia Floberg, “It was really fulfilling and exciting to hear that there were others who saw it and had their own personal interpretation about how it spoke to them, and what they had been through.” 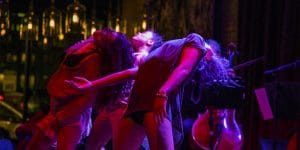 I certainly made my own associations and felt a kind of emotional alliance to the piece. Faced with the challenge of re-living, feeling, and navigating my own “story” of sorts, I came to recognize the beauty of what it means to take ownership of your own story. It can be difficult of course, painful even, but I’d like to think that if we are brave enough to explore the darker parts of ourselves, we are bound to stumble upon the infinite power of our light.

If we are brave enough to explore the darker parts of ourselves, we are bound to stumble upon the infinite power of our light.