Lissie isn’t your typical singer-songwriter pop sugar–such as Colbie Caillat, Ingrid Michaelson, or Sara Bareilles. You know what I’m talking about, the kind of comfort-food acoustic pop you might hear in the background of a random episode of Grey’s Anatomy. This folksy, Stevie Nicks-esque troubadour is in a league of her own–sass, freckles and pipes included.

My first impression of Lissie? “Damn, this girl can rock.” 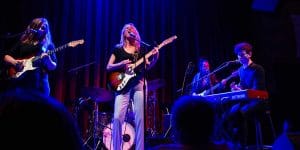 She’s the kind of live performer that seems almost entirely invested in the moment, seemingly unapologetic on stage. Kicking things off with some tracks from her latest album, “My Wild West,” her soulful, full-throated howls willed a buzzing crowd to a whisper. 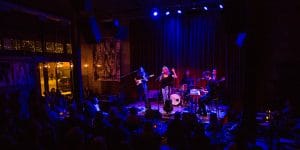 Having recently returned to her Iowan roots from the glitz and glam of California, “My Wild West” can easily be called her “break up” album. With a boy? No, with Cali. She grew weary of the Hollywood scene and sought solace on her farm in Iowa.

“I’ve been living my life on the edge/ Slip and fall if I take one more step/ There’s safety in numbers, I guess/ But I’m going rogue in the wild, wild west” 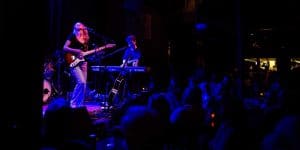 Well, I’m glad she went “rogue” and escaped the land of vapid, tan-toned vegans, and pressed juice for the good ‘ol wholesome Midwest. It feels good to have her back.

From wailing guitars and bluesy ballads to light, upbeat songs that seem to emulate her chipper personality, Lissie is quite the entertainer. She chatted about anything from her dog–whom inspired her label LionBoy Records–and her obsession with re-watching “The Office,” to her quirky watercolor selfie hobby. 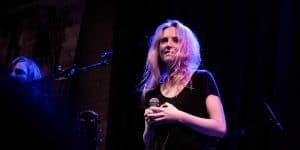 “If you send me a selfie, I will watercolor your face!”

Her mom and dad sat, among others, at a candle-lit table front and center. Mom handed Lissie her glass of red wine to sip on between songs. “So, I gave up drinking for three weeks. I was shooting for six months, but eh I caved a couple days ago.” 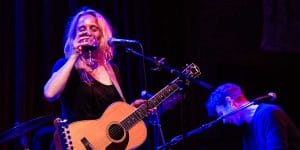 Loose and quite chatty, Lissie was, as I’m sure her mother would say, “a hoot and a half.”

Lissie’s last time through, just an acoustic guitar and mic in tow, she sold out the venue. This time around, she brought a band. Keyboardist, drummer, bass and backup vocals–the four-piece crew put on their first ever live performance Thursday.

“This is our first time playing for people. So, be nice.”

Honestly, you wouldn’t be able to tell it was their first time performing together. Lissie obviously felt very comfortable up there on stage. The band followed suit. 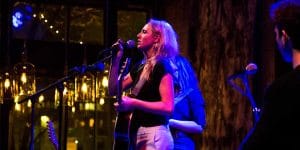 She took the opportunity to also show off some of her new material bound to show up on her upcoming album, “Castles.” Recorded straight from her barn in northeastern Iowa, Lissie’s newest work borders on folk-rock and dream-pop, an introspective take on her past nomadic lifestyle rendered stationary, rooted. A chance to take a breathe and take pause. 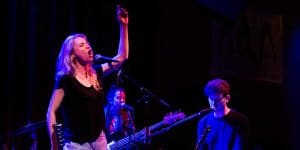 “‘Cause the best days of my life are coming for me/ Waiting to be realized/ I keep my eye on that prize/ If the best days that I know are just in the past/ Am I gonna last forever?/ I want more best days”

Make sure to keep this day in mind: March 23rd, the day Cooking Vinyl is due to release “Castles.” Seems like the best days are yet to come for Lissie.