For the first time in a long time, a concert at the Medina Entertainment Center felt like a concert! Tonight’s show was sold-out and they finally left the floor open to general admission, allowing the audience to crowd the stage! No seating and, more importantly, nobody yelling at you if you stood up! This has happened a few times in past shows at the venue.

I’ve been looking forward to this show for a while now! Two great ’80s acts tonight, with L.A Guns opening up for Cinderella frontman Tom Keifer and the #keiferband.

It’s been several years since I’ve had the chance to see L.A. Guns perform, this time it featured original member Tracii Guns and the main lead singer Phil Lewis, who joined in 1987. I’m not sure who the singer was the last time I managed to see them, I will say they butchered the hit song “Ballad Of Jayne.”

L.A. Guns came out with an energy I didn’t expect! Whether it was Phil’s vocals, which sounded even better live as he hit high notes that most people wouldn’t be able to hit anymore, or Tracii’s Guitar work, the presentation was exceptional!  Especially on the hit song “Electric Gypsy,” where Tracii showcased that unbelievable guitar work!

If you haven’t heard L.A. Guns new album The Devil You Know, you should give it a listen, it’s a pretty good spin! They played a few songs from the new album, including the new song “The Devil You Know,” with Phil Lewis coming back on stage donning a creepy devil mask! It might have just been me, it seemed Phil enjoyed being behind the mask and really got into it!

The last half of the set belonged to the hits which include “Never Enough,” “Kiss My Love Goodbye,” and the aforementioned “Ballad Of Jayne,” which was great to hear and not cringe! Ending the night with the shredder “Rip And Tear.”

On a side note, Phil fell to the same thing Stephen Pearcy did several years ago, not knowing how to pronounce Medina (Meh Die Nah) repeatedly calling Medina (Me Dee Nuh). Hey, it was worth a giggle every time he said it.

Finally, it was Tom Keifer’s time to shine! Tom must have been listening to the L.A. Guns set, he stepped his show up accordingly! Wow! I’ve seen Keifer play several times over the last five years and this is by far the best I’ve heard him! His vocal range was amazing, at times even going higher than he does on the recorded version.

He started the night with “Touching The Divine,” from the newly released album Rise, before coming back with hit songs “Night Songs” and “Coming Home” from his former band Cinderella.

The night consisted of all the bluesy rock you come to expect from both Cinderella and Keifer! He even performed a few of the hits with a different spin. During “Nobody’s Fool” the song stopped on the word “Scream” with the reverb shaking the room. It’s good to see a few twists to the songs when otherwise you might as well just listen to the recorded version.

Fans got what they came for as Tom and his band played their hearts out. They delivered mostly Cinderella hits with a few songs from both of Keifer’s solo albums. 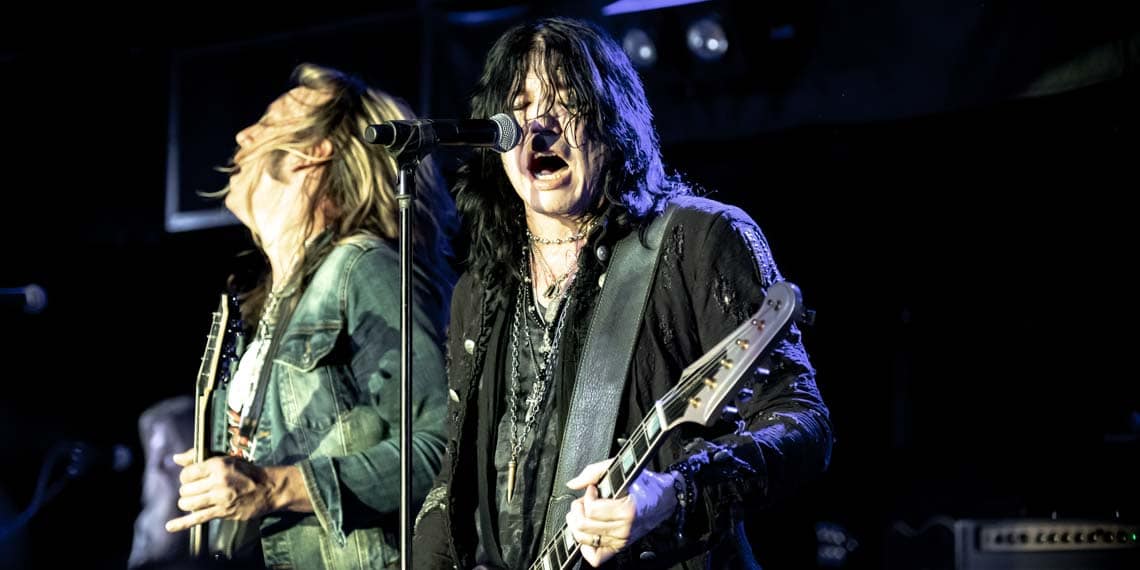 Cinderella songs were the bread and butter. Fans in the front row went wild during “Shake Me,” “Shelter Me,” and the encore finale “Gypsy Road”(almost like they were in a video).

Tom Keifer never fails to deliver a great show! It seems strange to say that maybe his voice is actually getting stronger. A worthy show each and every time.