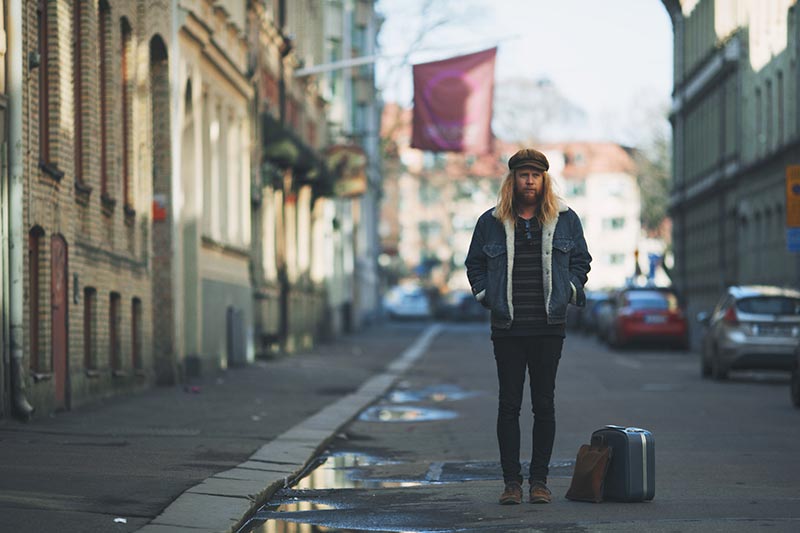 “I’ve only got one pair of shoes comforting these weary feet, cos’ a man who owns too much is like a song without a beat, left feeling incomplete…”

Stu Larsen’s newly released album, Vagabond, contains tales of travels taken on a whim, with no final destination decided and no itinerary to follow. It’s full of startlingly simple, compellingly pretty, storytelling songs describing his experiences with those he met along the way.

Vagabond isn’t Stu’s first album, although it feels like a new start. Growing up in the tiny Queensland town of Dalby, three hours west of Brisbane, he learned guitar from the age of 14 at his mum’s insistence.She had spent the ‘70s in a folk band and thought learning an instrument might help her son overcome his shyness. At 15, he wrote his first song. On his final day of secondary school, he was brave enough – just – to perform a song he had written about his final year in front of 1000 fellow pupils and their parents.

“As a shy kid, it’s probably the worst situation you can put yourself in,” he says. “I was so nervous, I almost couldn’t go on stage. But as soon as I did, I was fine. That was the moment I got over a disabling fear of performing in front of people.” Stu has come far since that day.

Songs on the new album include “San Francisco”, “Ferry To Dublin” and “King Street,” the latter being a reference to Stu’s occasional base in Sydney’s Newtown, where businessmen and beggars co-exist and you can learn about life simply by sitting in a café for a couple hours, watching the goings-on. The oldest song on Vagabond is “San Francisco,” the opening track, which was written on that first trip Stu took out of Australia and the Far East. A three month journey was due to end in L.A., but upon landing in the city, Stu picked up a car and drove up the coast to San Francisco. That drive is beautifully captured in the song in which Stu, with his “too tight jeans and too long hair” and Paul Simon on the radio, ponders finding love on his arrival.

Since his decision in 2010 to venture further than his native Australia, New Zealand and Japan – all countries he had already toured several times – Stu hasn’t stopped traveling. This is partly due to his great friendship with another artist, Passenger, for whom Stu has been a supporting act over the past three years.

It was Passenger who produced Vagabond, an album originally recorded at the tail end of 2012 on a shoestring budget. Passenger’s global success, however, took the pair on an unexpected journey that lasted longer than either imagined as their audiences grew from 50 to 5000 people.

“It has been an amazing journey to tag along with and to learn from,” says Stu. “For most of it, it was just the two of us, I would be handing out Passenger’s flyers and selling his CDs while he was busking(playing music for voluntary donations in the street or subway stations), all over the world. We couldn’t believe it when 100 people starting turning up at the shows, now it’s thousands every night.”

Since the album was re-recorded in Sydney in January with a host of musician mates – including a string quartet, Passenger on backing vocals and guitar, banjo and backing vocals from Tim Hart (Boy& Bear) – a four month tour has been scheduled in Australia, the UK, Europe and North America for the 2015 year.

Next, Stu answers a few questions from our recent interview with him: 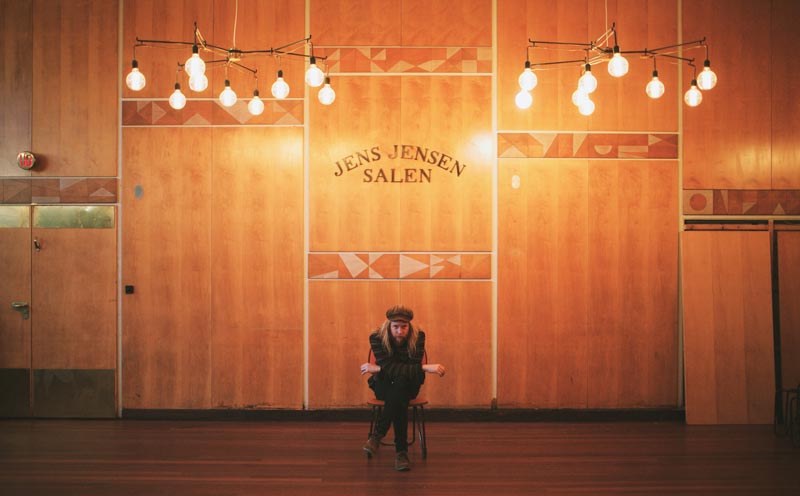 What was your childhood like?
Amazing! I grew up on a farm in Australia and had so much space to go and explore and wander about! I loved it 🙂
When did you realize that music was your thing and were you self taught?
My mother made me have a few guitar lessons when I was 14 but I think it took another 10 years before I really felt like I could do something with music.
Being from a small town, how have you taken to the big city?
I love exploring big cities! Whenever I am in a new city I take my camera and wander around aimlessly for hours. I love visiting big cities but I have a real affinity for the smaller towns in between. 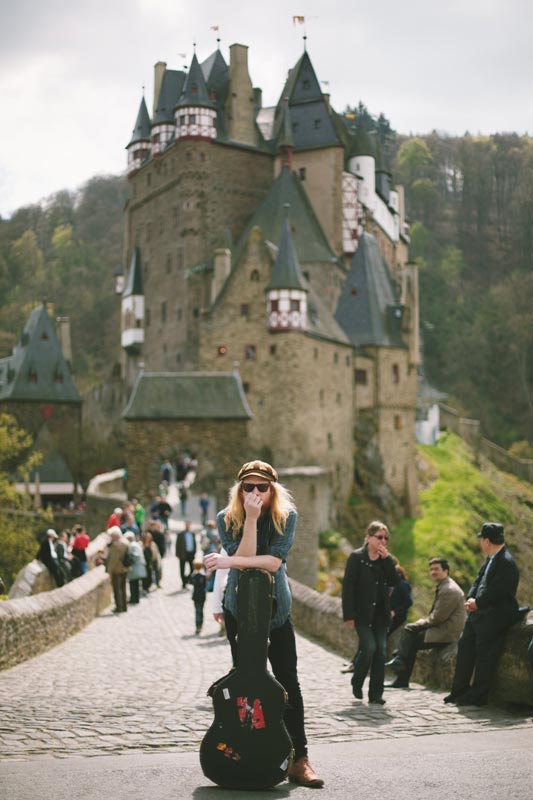 What has been the most rewarding part of being a touring musician?
Seeing the crowds grow over the years. It’s so special to see familiar faces at all the shows and to be able to catch up with acquaintances in each city and it’s equally as special to see so many new faces at each show. I think just being able to see the world like this is the most rewarding part.
What song are you most proud of writing and what is your process for writing a song?

San Francisco. Writing this one happened so naturally, sitting on the floor of a vocal booth at a studio in Los Angeles while my friend was mixing a track we’d just recorded. It took about 10 minutes and it was done. My usual process for writing songs is to isolate myself for a month and get into a real creative zone on my own, though it’s becoming near impossible to take this length of time off, it’s normally only a few days or maybe a week between tours.

Do you remember the very first song you wrote?
Monday Morning Blues – It was some silly little song about not wanting to go to school on a Monday morning….

What were some of your fears going into the music industry and have those fears gone away?I don’t think I’m really afraid of anything. I’m not one to jump into things without having a good feel for it first, so if this doesn’t change then I don’t think I’ve got too much to worry about. 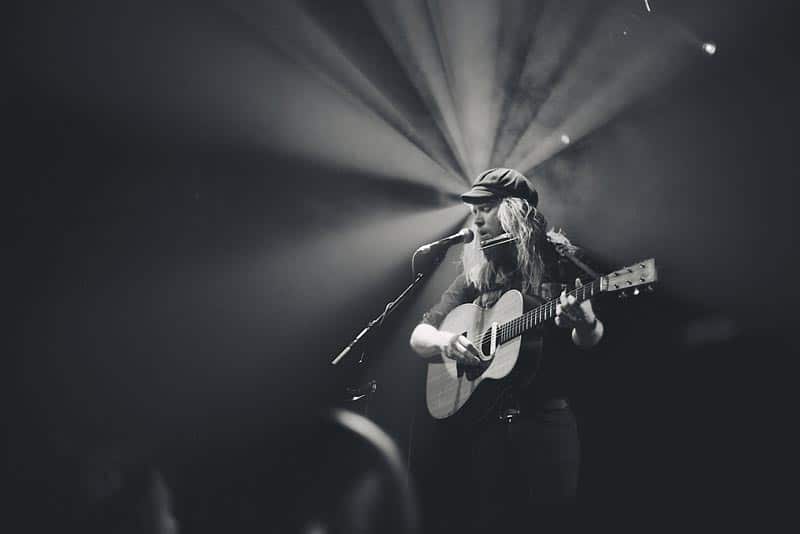 Have your friends and family been supportive about your music career?
Yes, very! My mother and sister even flew to London to surprise me at the album launch for Vagabond last year!
What single piece of advice would you give to someone in hopes to change their life for the better?
Live simply. I think we can unnecessarily complicate and clutter our lives so much these days. For me, life feels better when it’s less cluttered.
What accomplishment would make you feel like you’ve done it all?
There are a handful of venue’s I’d like to play at some stage which would make me really happy, but as long as I can keep traveling around the world playing music for people who want to listen, then I will be pretty content.
Any new music in the near future?
Without a doubt 🙂