The Payne-Phalen neighborhood is the largest of Saint Paul’s 17 designated neighborhoods.The Payne Avenue corridors is filled with rich architectural history, unique dinner destinations, and a growing arts community that is slowly transforming the area. Catalyst Music’s brand new music venue, The Treasury, is aimed at becoming the 7th Street Entry version of The Garage, their larger music venue.

Finding an area and landlord that understood what an all ages venue really means was the first step in a plan that Jack Kolb-Williams (Executive Director and Co-Founder of Catalyst) has been working on since 2015. One of the main things they heard about their Burnsville location is the distance and difficulty of getting kids to travel down there for shows. The main room can also be really intimidating for younger up-and-coming bands as well. So creating an intimate all ages venue to nurture and cultivate new artists was key.

The future looks bright for a developing neighborhood with art studios like Second Shift, record stores like Caydence Records and Coffee, and coming soon music venues like Jon Oulman’s (331 owner) Cafe Lilla and converted funeral parlor, blues venue House of Payne. In an arts driven neighborhood that already has culture and diverse food options, the potential for reshaping Saint Paul as a music destination looks optimistic.

The Treasury obviously correlates to the building it sits in. The white pillars of an old Swedish bank that was built in 1910, the venue lurks below down a flight of stairs. The parking lot in back is easily accessible with an elevator for bands and handicap to enter in from. The first feature you’ll notice when walking in is a large black fireplace, inviting you in for a quick selfie with the logo above. There’s a long wall purposed for merchandise and a concession cart for easy snack options. 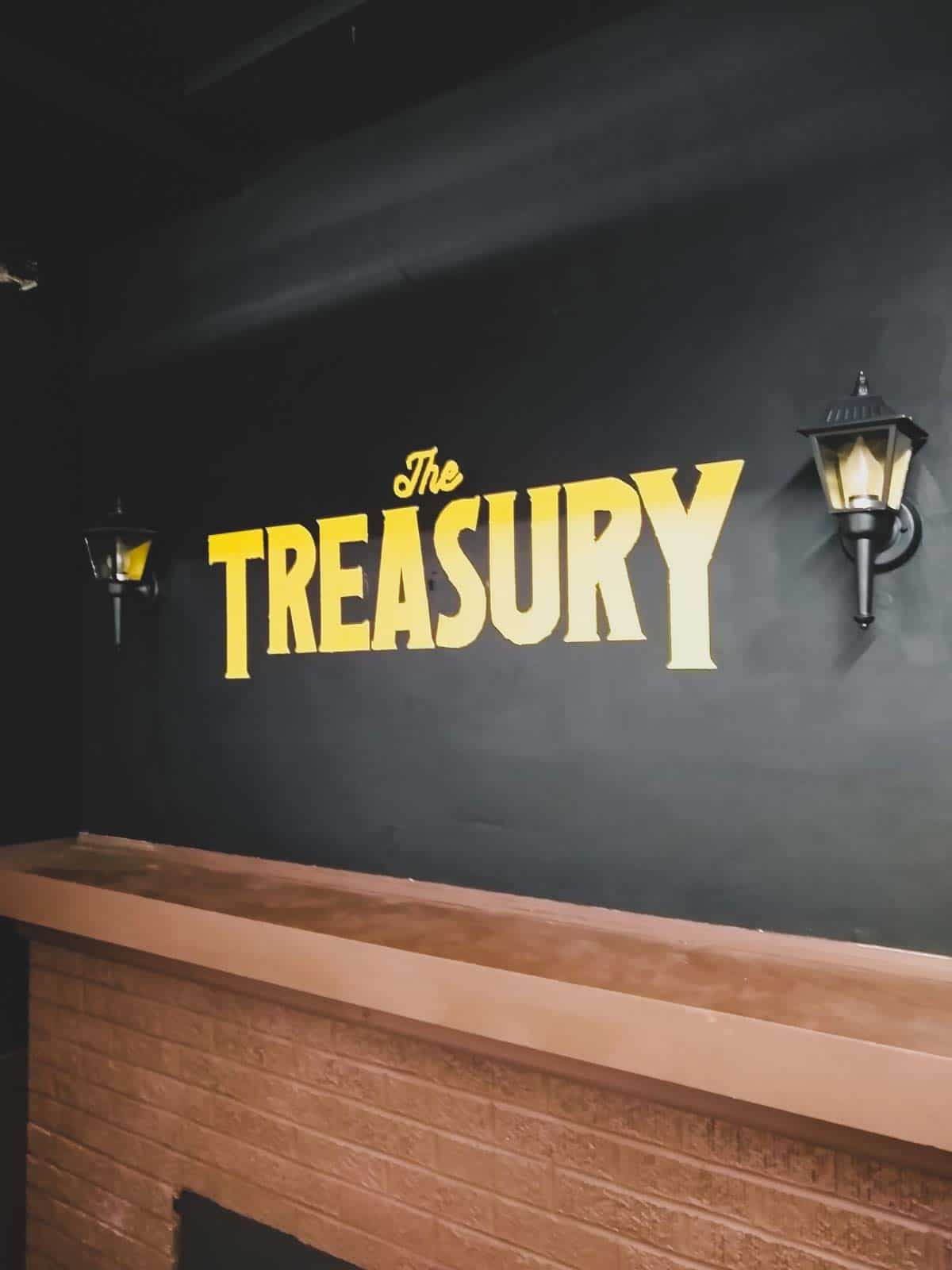 The over 1,300 square foot venue has a DIY basement show vibe. The soon-to-be installed stage will have open sides for crowds to surround the stage, much like the Triple Rock Social Club. The walls are covered with leftover wood that was found from houses all over the neighborhood. The colored planks help provide that intimate closeness along with a smaller sound system and lighting structure hung from the ceiling.

The green room sits next to the main area and will be a large space for artists to quickly get in and our during sold out shows. Around the back sits 3 gender neutral bathrooms, all newly installed. The mixing board is set on wheels so it can be mobile and versatile depending on the show. Through a close side to the stage is another exit that has been dubbed, “The Prince Door”, in case they ever need to rush anybody in and out secretly.

The room was sonically setup with a software program that allows you to setup microphones at places all over the room and capture noise coming out of the speakers. The program gauges all the different frequencies across the audio spectrum to reveal inconsistencies in either the low end or the tinny high end stuff you can barely hear. They can then address where to hang sound absorbers to evenly smooth out the room. This gives you control over how the sound reflects and can equally carry to anyone in the audience.

But besides having a finely tuned performance space, the blueprint behind The Treasury comes from Catalyst Music. Their advisory boards specifically focus in on issues and determining the decisions inside these venues. These are paid young people working, via Zoom, to plan the sessions that are happening, along with booking music for the future. These are young people that live specifically in the Burnsville community or Eastside in the Payne-Phalen area.

These advisory boards meet together to discuss opportunities and ways to influence the programming at these music venues. It helps develop skills as many of them have gone on to work with First Avenue or Live Nation. Others have learned business skills that they’ve applied in different careers. Catalyst Music helps channel that conduit to help them be successful for future professions. It’s this underlying passion to support our youth that makes every show and every dollar of revenue so important. As a non-profit, our support directly helps develop the youth of our music scene.

“We’re not a bar that has music on the side. We’re actually a venue first and having something this size and intimate for our community is important. The contribution to the ecosystem of venues in town is what’s really exciting for us,” shares Jack Kolb-Williams.


Steffan started at The Garage back in 2004 going to shows and volunteering at the venue. It allowed him to see more music and save money while in high school. Eventually that led to him learning sound mixing and getting experience guidance from staff that had attended colleges to study production. That’s continued to grow with doing work at the Amsterdam, for tours, and a role as the Production Manager at Catalyst Music, which puts him in direct contact with incoming bands.

The pandemic has expanded his experience even further into live streaming. As a live sound mixer you feed off of the energy of the crowd and the way everything sounds in the venue. But mixing music for an online audience requires him to listen more intently and spend more time making each instrument clear and balanced. That challenge has pushed him to mix more with headphones, understanding how a guitar inside the venue may be extremely loud, while online it’s quiet.

“Normally you’d react to the hype of the crowd, the feeling of the subs, and needing to push the volume of certain things up. Online is a different landscape,” states Steffan.

There’s a disconnect as well with the live room and online environment. At first they tried to send the mix just out to the live stream while the band played, without using the sound system at the venue. But that lack of feeling and energy felt off and the band noticed. The natural reverb and sound of a band is a space is important. This makes Steffan notice more throughout a performance, always making adjustments that will translate better online.

Chosen as the first performance inside the venue was the band Rigby. Initially formed from friends from School of Rock, they performed at The Garage doing covers as a one-time thing. After the show a bunch of people wanted to know their band name and where to find them. That night they quickly decided on a name and made an Instagram account.

“I owe that to The Garage, which I think is kind of a cyclical thing how it comes back, but that’s where we started,” Maude shares.

Described the band as first and foremost, loud, Rigby doesn’t take themselves too seriously. As a loud punk band that brings together their own influences from Babes of Toyland, Dead Kennedys, King Gizzard & the Lizard Wizard, and genres like Americana, and classic Country. The group considers their best quality their stage presence. They genuinely enjoy playing together and that shows at a live show.

Maude is a co-chair of the CMC (Catalyst Music Collective), running The Treasury side of it. She attends virtual meetings with all branches of the collective, writing agendas, and staying informed by the community outreach specialists. Everything is done together as a group, which builds teamwork and communication skills. Maude has always liked working with people from all different backgrounds. Add in her affection to music and being in a band, it’s the perfect combination.

“When I was little, my only lens for where music could take me was being a superstar. As I’ve grown up and become more involved in the music world, I’ve had a wonderful shift in perspective. Opportunities such as the CMC have allowed me to explore the many ways that music can fit into my life in the long run.”

Her goal is to make sure the community is involved with the new venue due to the diversity in the neighborhood. She’s been to multiple events in the area that pull together these communities, from the El Salvadorian restaurant providing tamales, to the Ethiopian restaurant sharing their food, to the Hmong students from Hope Community Academy getting involved. That collaborative spirit excites Maude to make those connections. It completely opened this window of opportunity for her as a possible profession she wouldn’t of known about.

Accessibility is another key element for The Treasury. They plan on never charging more than $15 for a ticket. Also being located in St. Paul gives young people a closer space to see music than making the trek down to Burnsville. Maude has lived in East Side her whole life and finally having this resource is something that can change the area. It’s a chance to grow a community without it being gentrified and filled with expensive condos. A chance to bring together people from all walks of life to enjoy music.

Rigby had the honor of being the first recorded show inside the brand new venue last month. Masked up, with balloons floating around them with the words “We’re Dying” written on them, Rigby tore into their new single “Daisy” to open their set. We’re Dying is the name of their upcoming album and the first music video is killer, to say the least.

Tearing through their songs with unabashed energy, Maude channels a gritty punk-blade with her voice. In watching them perform “Dead Man’s Child”, “Anymore”, and “Holden On” (songs off their 2019 Unperfect Demos) there’s a clear development and growth in their musicality. Tighter as a band, more energized together, Rigby sounds more confident in who they are. Each song is focused and carries a memorable section.

“Not Like the Other Girls” stood out to me as the punky, pointed, and attitude-pistoled ballad that Rigby handles skillfully. Platform boots and ripped fishnets seem to be embedded in the song. The interesting contrast of teenager angst and joy of performance combines with Rigby. They are growing into their persona and maturing into a pop-punk presence.

Mixed into the set was some new songs that strengthen the formula of Rigby. Typically short, but concentrated with a directed message, each song loudly grinds and churns, impelling you to watch. The set has these moments of vivid and wild clashes that Maude orchestrates. Her face contorts and body builds to stomp and deliver an exclamation mark. It’s easy to see the potential of this young band in that energy.

Watch Rigby’s special inaugural performance inside The Treasury this coming May. The stream will be free and available to watch on The Garage’s YouTube channel.

Interested in performing at the brand new venue? Email [email protected] or send a message to them on Instagram.

Music venues are the lifeblood of our community. By providing musicians the opportunity to showcase, collaborate, and experiment with their craft, venues are essential in their development. This series will continue to promote and support our local venues across Minnesota. Please see the previous articles below and go support local music. Our hope is these articles show the importance of supporting venues and places where creativity can thrive.