Music can have a way of finding it’s way into your life at a young age. For Christina Kast, it started early. As a kid she would keep getting new instruments to learn and play. One after another, soaking up the skills and ability to jump around on instruments. From trumpet, guitar, piano, to drums, to even singing in choir for a few years, Christina ultimately decided it wouldn’t be a good career path, choosing instead to keep enjoying it as a hobby. This deep passion for music has remained with her ever since.

She’s been going to school for the past five years and just received her degree in physical therapy. Christina will start as a physical therapist assistant, but shared that music will always remain a large part of her life. Losing live music the past year has been tough, but allowed her to focus on finishing up her schooling.

In the Absence of Live Music

Without live music, Christina has been streaming music much more than before. There’s always music of some sort playing during her days. She’ll also go back and watch recorded shows as well. These small pieces are quick reminders for her on what we’re missing and the value of being together for music.

“It helps bring back that feeling to partially fill the gap until we can have live shows again. It’s something to fill the void and get me through my days,” she says.

Live music has always been an outlet for Christina to discover new artists. She’ll catch someone opening for a larger band and start listening to them. Being in a venue gives you that opportunity to hear new music. Without that, she’s pivoted to discovering new music through social media. In following artists she already likes, she’ll see who they promote or do a feature track with.

Her deeper appreciation of live music begun at the age of 21 when she could finally attend more shows. She started going to more and more shows and realizing that there’s a massive talent pool in Minneapolis. The ability to then see quality music any night of the week opened her doors to the power of live music.

It was at a Grieves concert at Fine Line that Christina discovered Nur-D. She looked him up on Instagram in between sets because she was blown away by his performance. She was shocked that he was local and asked why was she not going to see him more. She clicked follow and has made an effort to attend any show when he performs.

“He’s such a big presence to be around. He builds up all this excitement and is a very inclusive performer. He makes sure that he’s engaging everyone and that really appeals to me.”

Nur-D has played some of the largest venues in his short but full career. So standing inside an empty Electric Fetus, which he confessed was the first time inside, felt uncanny being a place where he hasn’t performed in yet. He also shared that he was more nervous because he could see Christina, where as First Avenue it’s all dark and he can pretend he’s alone.

His performance of “20 Cha” kicked off a set filled with some older favorites and unreleased newbies. The infectious presence of Nur-D immediately swept through the store. His shirt sporting a Spotify scan code to his artist page, he treated Christina to the save level of energy that he’d have at a packed venue. 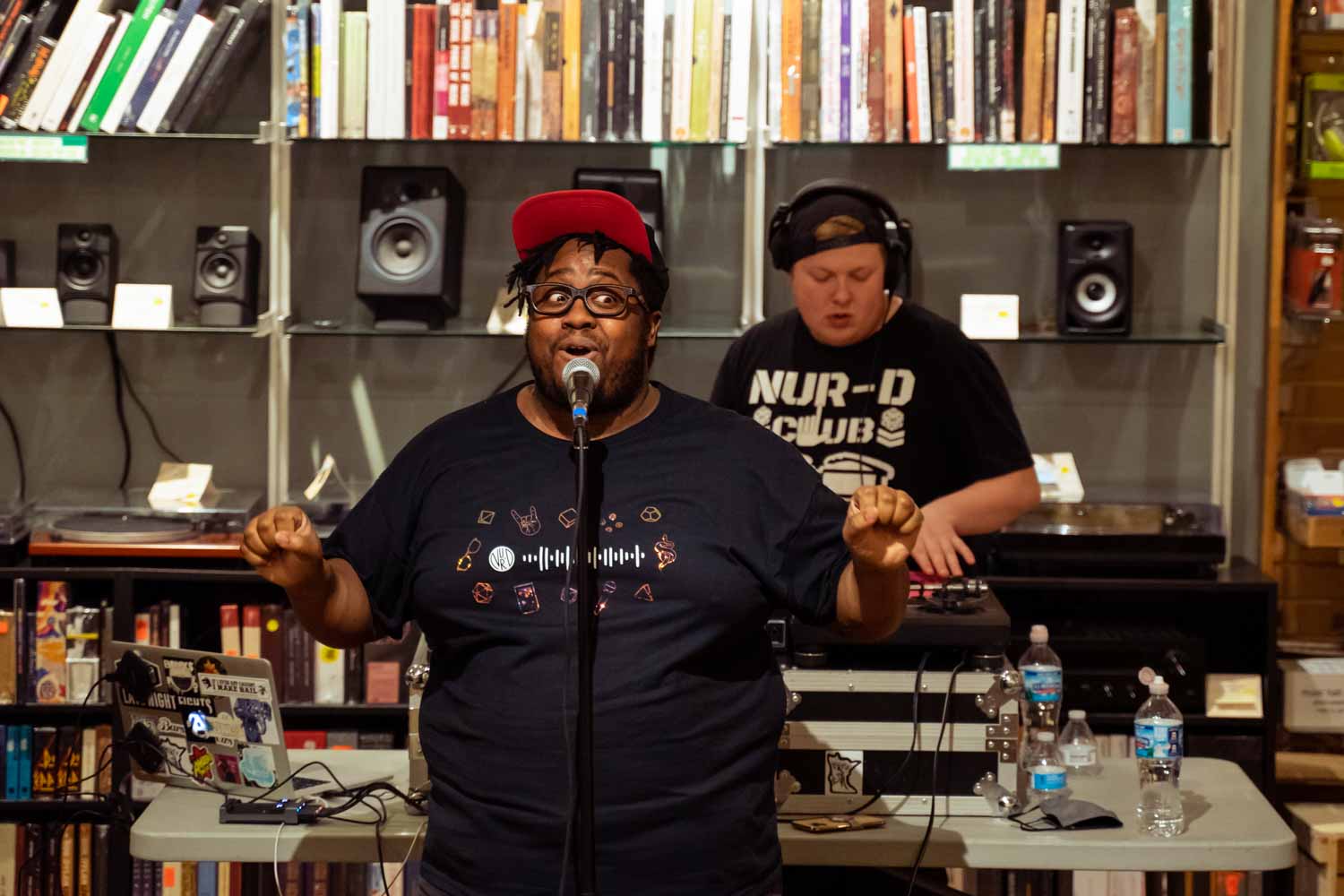 Nur-D asked everyone to raise their arms during “Glorious“. When watching him perform, you can feel the joy he has for being on stage. Every time our hands went up, a smile would cross his face. That level of engagement and inclusive spirit is why Nur-D deserves to been seen live. The added level of nerdy-ness and unabashed attitude of who he is also appeals to so many people struggling with self confidence. His songs are authentic and shine with hope, respect, and inclusive acceptance of each other.

Amidst all of the danceable songs in the set came “Pity Pho”. A slower, more sentimental song about getting hurt, Nur-D describes the awkward situation of being on a date that falls apart in front of you. Listening to the song, it’s easy to relate and feel something for that experience. In watching Nur-D perform the song, you can visibly watch him relive the experience in his head.

Live music to Christina means having something to look forward to. You buy a ticket, mark it on the calendar, and spend weeks thinking about the upcoming show. The excitement builds up and each show is another moment to look ahead towards. Live music also builds bonds with friends. Going to shows together and having a shared experience is unique. The social side of live music means so much to her.

The last show Christina saw before the pandemic was First Avenue’s Best New Bands show. Seeing all kinds of different people and different genres of artists together is what live music should be about. That inclusive nature that nurtures discovery into new music is so important in our community.

Follow and find more from Nur-D at the links below