The boys in Hippo Campus are back at it again with a new album, Bambi. Continuing to rock the same crew, Jake Luppen (vocals/guitar), Nathan Stocker (guitar/vocals), Zach Sutton (bass) and Whistler Allen (drums/vocals) and DeCarlo Jackson (usually seen on saxaphone), however, some sounds on this project might surprise you.

It’s obvious the group has grown up since the last time we spoke to them in 2014 in an interview before their show at First Avenue’s ‘Best New Bands of 2014’.

Before we break it down, read below some insight into the record from Luppen, making a social media post to give friends and family an inside look into what this collection of songs is all about, and thanks fans for their support in allowing them to explore unfamiliar sounds.

“In the beginning of the recording process for bambi, our producer bj burton asked us if we wanted to make another “hippo campus record” or if we wanted to make an album as “four individuals under the name hippo campus”. we unanimously agreed to take the latter approach. this album became an experiment for us on how to be heard as four individuals within a group. we untied ourselves from the roles and instruments that we identify with and chose to create with whatever spoke to us in the moment…we hope that you will approach this record with an open mind. we appreciate the immense support y’all have given us since the beginning; allowing us to grow into the artists we are today and beyond.” 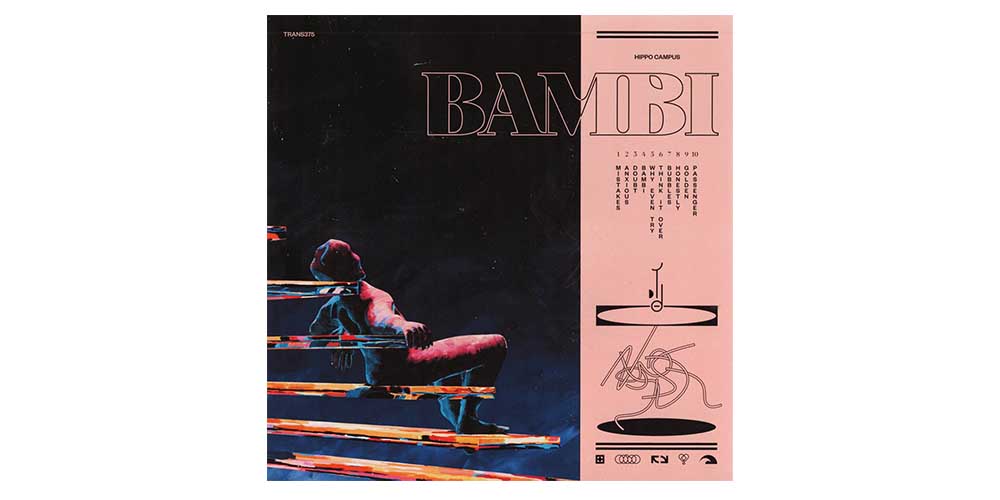 Producer BJ Burton’s (Bon Iver, Low, Francis and the Lights) influences are definitely present on this project. Parts of the album art also resembles Bon Iver’s hieroglyphic looking symbols on 22, A Million, along with abstract formatting of the track list.

The introductory track “Mistakes” starts with haunting vocals over winding pads. The group gets creative with use of transposed vocals, as heard in “Anxious”, followed by an anthemed ‘All-American rejects-style’ chorus, which I dig.

“Doubt” puts me in a dream state for their chorus, “Love, is it, love…”. Their single, “Bambi”, starts with a synthy lead that sound similar to Foster The People’s “Pumped Up Kicks”. The tight snap of an electronic snare drum distracts me, but it fits the style they’re going for.

Luppen explains how the lyrical creation for “Bambi” was shaped by cultural shifts, including the #MeToo Movement.

“That really made us take a look at how toxic masculinity has influenced the way we see ourselves and the world overall. In the past, we might have been apprehensive about being super-vulnerable, but now we’re more aware of how important it is to come forward about dealing with depression or anxiety. Because if more men are able to do that, they might be less likely to express those feelings as anger or violence.”

A straight-forward, “Why Even Try” is next; a raw and familiar sound beginning with acoustic guitar and leaving out the use of electronic instruments. It feels good.

I identify a vocal layering of auto-tune effects on “Bubbles”, a track which if your volume is up loud enough, will startle you upon impact of the chorus. You may be checking your speakers to see if you blew them out, as the audio of the arrangement reaches beyond a comfortable level.

The track quiets back down. I pick up on (whether it’s intentional or not), lyrical parallels to Bon Iver again as Luppen sings words like “over soon”, a song title from Justin Vernon’s 22, A Million record, as I am also reminded of Vernon’s record in the intro beat to their closing song “Passenger”.

All in all, I enjoy the record. I was surprised we didn’t hear more of Jackson’s brass instrument performances. “Bambi” is by far my favorite, which makes sense why it’s the single from the album.

What did you think of Bambi as a whole? Let us know in the comments!

I look forward to catching Hippo Campus on tour this winter. Don’t miss them performing at The Palace Theater on November 23rd and 24th! Full tour dates below.