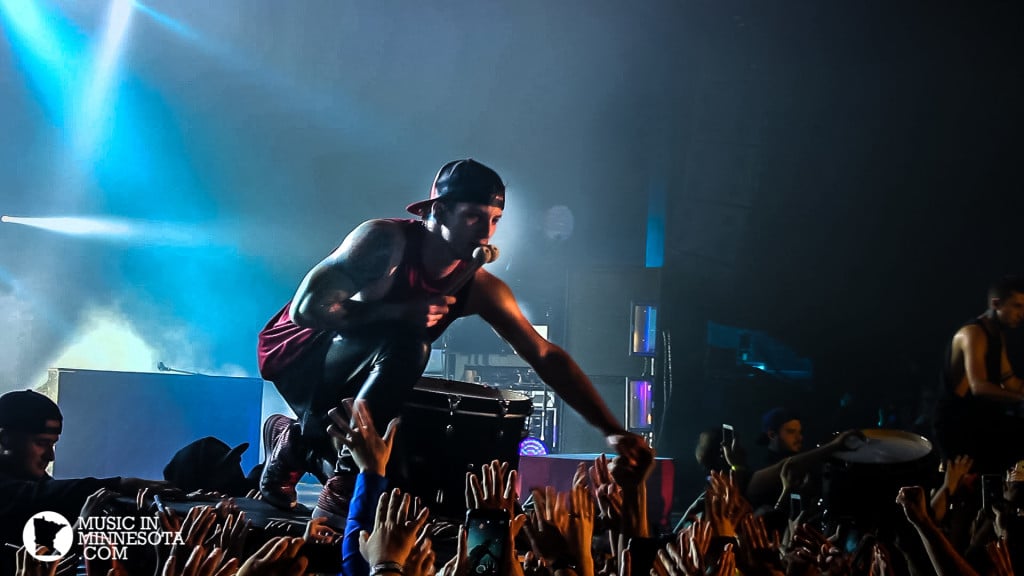 The Columbus, Ohio based band Twenty One Pilots has done it again. Singer Tyler Joseph and drummer Josh Dun never cease to impress fans with their electrifying songs and ever improving presentation. Despite having only two members in the band, they have no trouble outdoing just about any other performance I have ever seen. Perhaps this is due to the fact that they really get the crowd involved throughout the whole show. 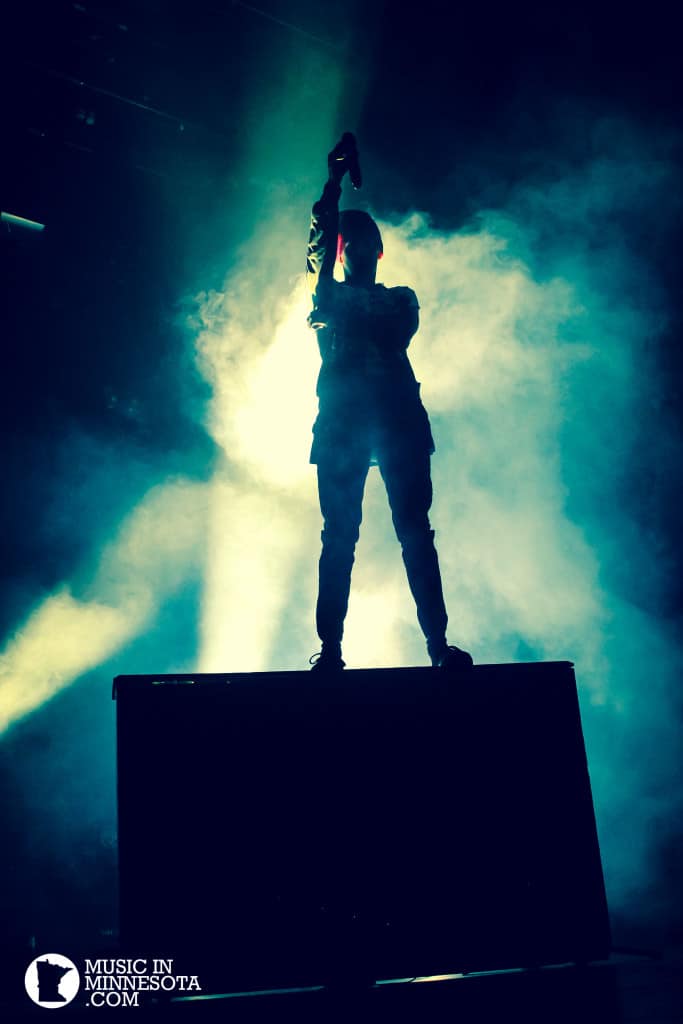 The pair has been travelling around internationally for their Blurryface tour, completely selling out most of the venues including the Madison Square Garden in New York. I attended their show on October 29th, 2015 at the Myth Nightclub in Maplewood, Minnesota. Like many others, this show sold out very quickly and I was lucky enough to snag a photo pass and photograph one of my favorite bands. The energy in the club was extreme; every single body in the building was ridiculously excited to see the pair perform. 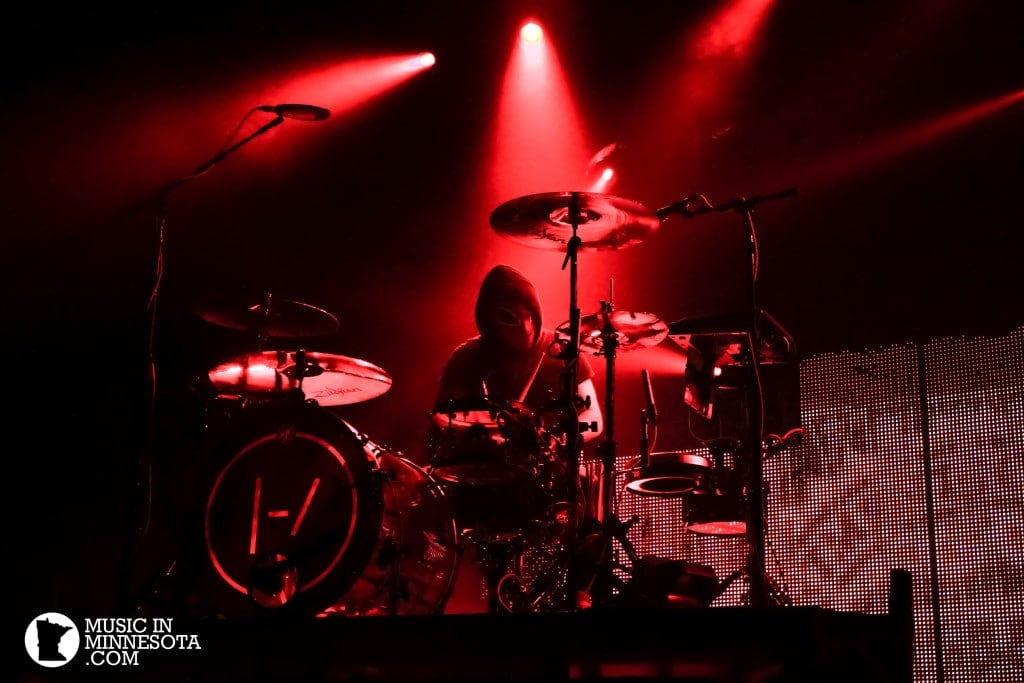 The second the lights dimmed, the crowd ROARED. I rushed to the photo pit, barely making it in time as the place was so packed I could barely move. As Tyler and Josh ran on stage, the energy surged to a whole new level. I couldn’t help wondering what it must feel like to have hundreds- wait, thousands of fans this thrilled to hear their music. 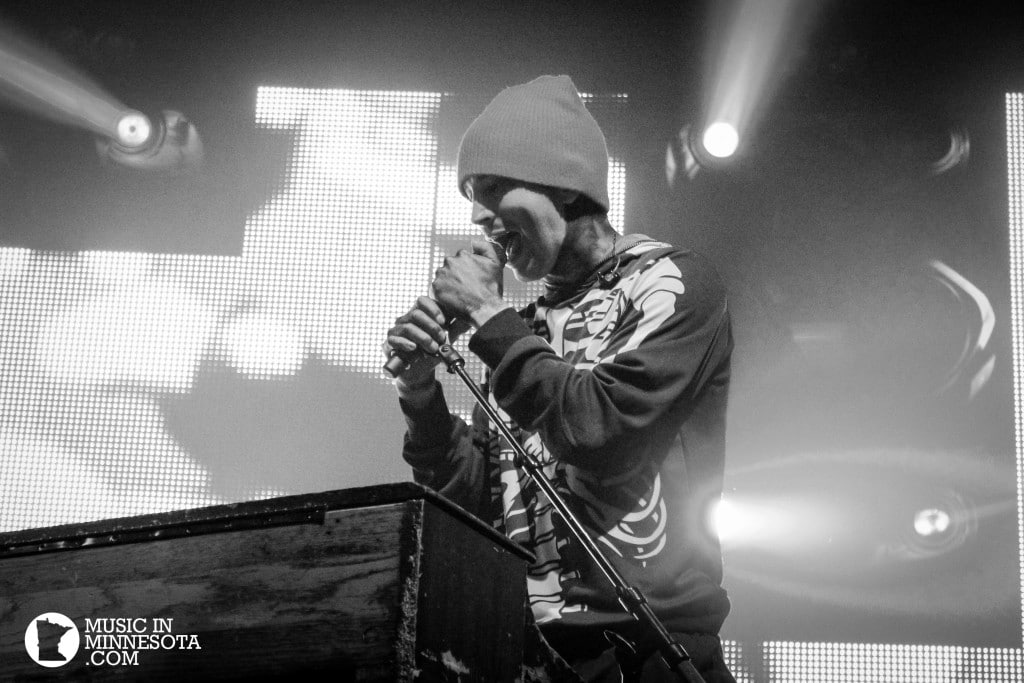 The band opened with “Heavy Dirty Soul,” one of the songs from their new album Blurryface. Despite the album only being released a few months ago (May 2015), fans already knew the song word for word. Tyler could stop singing at any moment in the song and the crowd was sure to fill in the rest. They went on to play “Stressed Out,” “Polarize,” “We Don’t Believe What’s on T.V.,” “The Judge,” “Doubt,” “Message Man,” and “Tear in My Heart,” all from their new release. “Lane Boy” was also performed with the help of the gas-mask and hazmat suit wearing dancers featured in the music video. 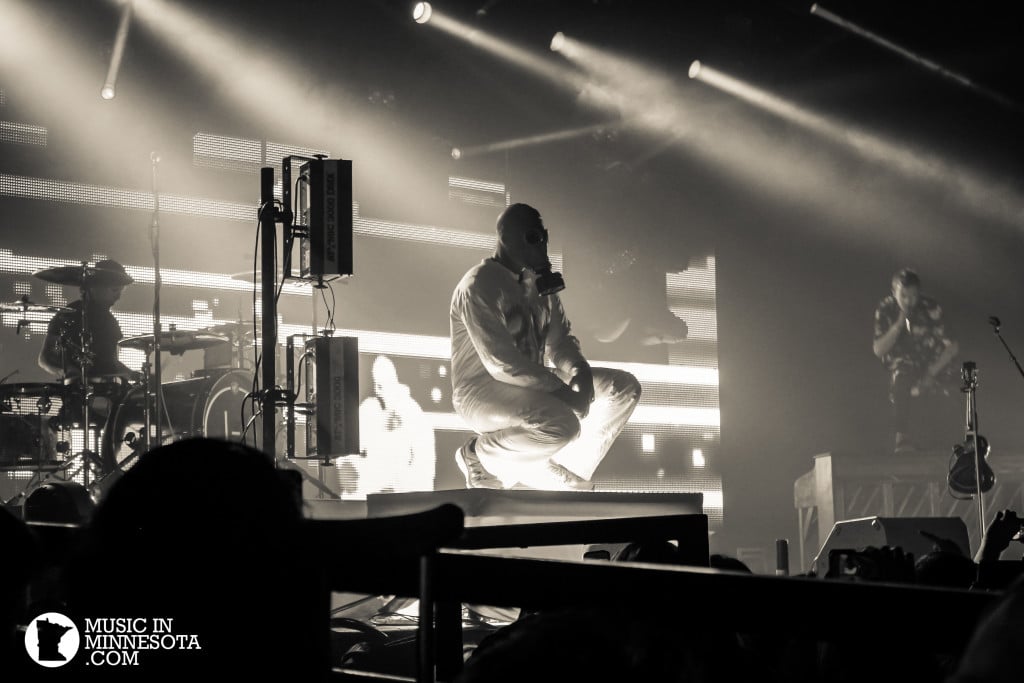 While most of the crowd already knew all of these new songs verbatim, the band also appeased the fans whose favorite songs came from older albums. “Guns for Hands,” “Migraine,” “Holding on to You,” “The Run and Go” (Tyler’s dad’s personal favorite), and of course, “Car Radio” were all played in their entirety. But did they stop there? Of course not! The pair then went on to play a piano drum medley sampling several other songs from Vessel as well as their first, self titled album. Among the songs played were parts of “Pantaloon,” “Semi-Automatic,” “Forest,” “Screen,” “Ode to Sleep,” “Addict with a Pen,” and “Screen.” 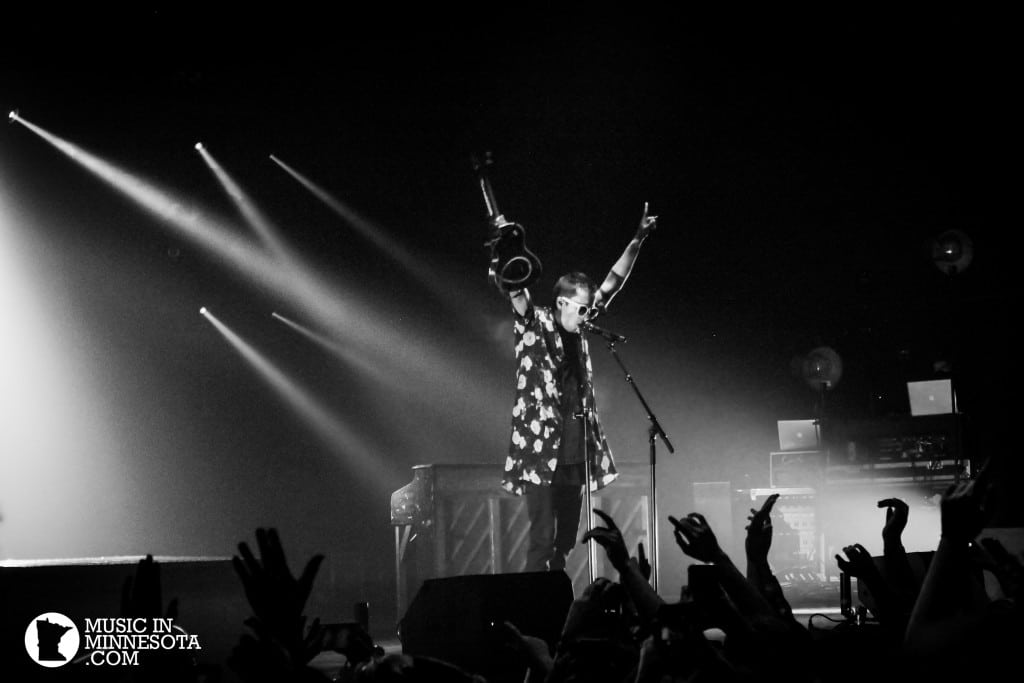 The band is very skilled at giving fans exactly what they want and more including a very thorough and inclusive set list, a visually thrilling performance, and a seemingly never ending stream of energy throughout the whole show. They make everyone at the concert as big a part of the show as they are, and check in multiple times to make sure they are doing “ok.” The crowd proves they are doing much more than that. They create an experience that anyone can lose themselves in, even if only for two hours.

Throughout their performance, Tyler treated the stage like a jungle gym, climbing and jumping off every surface possible. Josh joins in the fun as well, doing a back flip off the top of the piano. Halfway through their song, “Ride,” a wooden platform with a bass drum is passed on top of the crowed. Josh climbs aboard and finishes the song among the overjoyed fans.

While this is something the band is known for, it never becomes less exciting. Tyler also encourages the fans to partner up with someone besides them, whether they came together or not, and climb atop each others shoulders for the end of another song. Everyone was more than happy to oblige. Tyler then disappears from the stage and reappears at the back of the venue as he climbs up a nearly 30 foot tall truss to a platform at the top. Fans on the upper level now got the opportunity to share a song with him. Honestly, I could go on forever explaining the many ways they kept us engaged, but I think you get the picture! 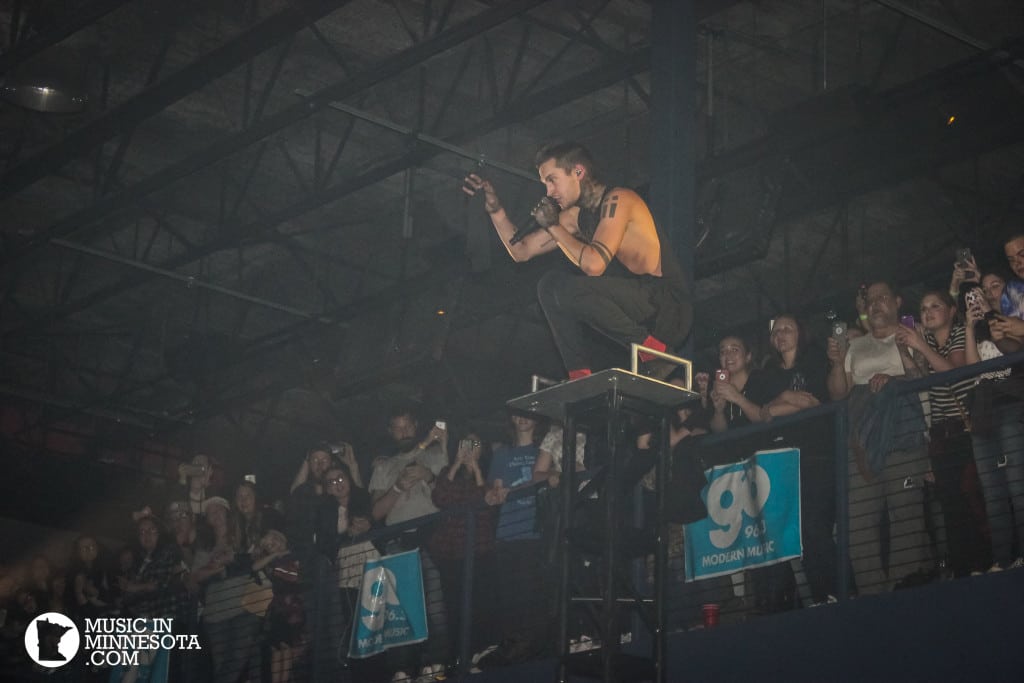 At one point, Tyler calls a fan to the stage. Everyone goes crazy awaiting the ecstatic guy’s ascent to the stage for something fun. As soon as he climbs over the barricade, Tyler promptly lets him know the real reason he is being summoned, “We don’t want guys hitting girls in the pit, so you’re gonna have to go.” The crowd explodes with approval. These guys just keep getting better!

Tyler and Josh finished with “Car Radio,” but of course we wanted an encore. And we sure got one. They first performed “Goner,” the only relaxed and most melancholic song featured on Blurryface. Finally, they finished the night with “Trees,” a song from Vessel that Tyler explains always gives them another burst of energy every time they play it. Both Josh and Tyler climb atop the fans yet again where they both play a powerful drum solo on bass drums. Following is an explosion of red and white confetti to top it all off. The duo climbs back onto the stage for a bow and thank you to the fans. Every heart in the venue was full of adoration and satisfaction after an experience they won’t soon forget. 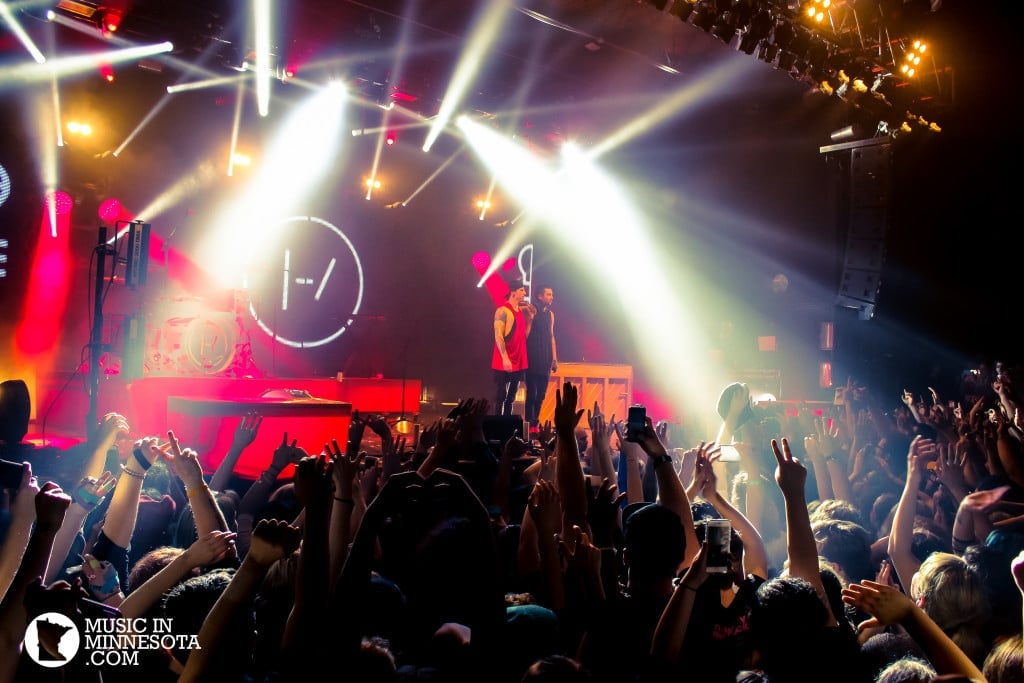 Twenty One Pilots describe their self invented genre as “schizoid pop.” Their introspective, sometimes sad lyrics disguise themselves in catchy melodies. If you listen close enough, you will begin to understand that they are more than just a good time. Every song holds a message worth hearing. One fan has compared attending their concerts to watching the finale of a fireworks display on repeat for hours. This has now been my fifth time seeing them perform, and I have to say, he hit the nail on the head. But don’t just take my word for it, buy tickets today to one of their upcoming shows and see for yourself!