Wow, wow & wow. That was the only word in my vocabulary during my night covering the debut concert at the renovated concert venue, The Armory. Constructed in the 1930’s, the building was originally built by the National Guard. It was also used as the venue for civic events, political conversations and also hosted exhibition games for the Minneapolis Lakers.

In 1989, Hennepin County purchased the building for $4.6 million dollars with plans to tear it down and build a jail. Minnesota Historical Society quickly stepped in and sued Hennepin County, arguing the structure was protected by state law, which the supreme court agreed. 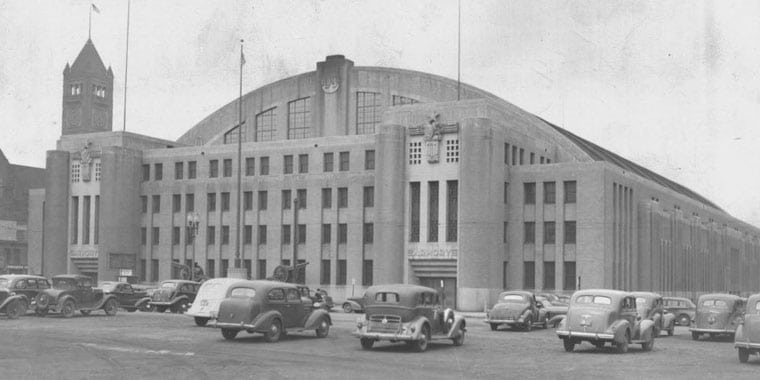 In 1998, the building was sold to a private company, who them converted the armory into  an indoor parking lot. What has been a glorified garage for the last decade has become Minneapolis’ first expansive music venue in recent memory.

The venue is vast and open, with a massive open floor flanked with bars hundreds of feet long, and the VIP sections flanked of the venue with spectacular views. There was seriously not a single bad seat in the entire house. This is what Minneapolis needed for its music scene. There simply wasn’t a large music centric venue before the Armory opened its doors, and now that there is, I could absolutely see more stops by bigger artists in the near future.

The Amory’s opening night was meant to showcase the kind of party it was meant to host: a music festival unaffected by the seasons. And, what better acts to start out with than festival veterans like Kill The Noise, Tritonal & Seven Lions, who made the opening night of the Armory a stop on their horizon tour.

The night started out with an arrival shortly after doors. When I approached the venue it was clear that I was not the only one that just had to be at opening night. Every entrance was packed to the brim with fans waiting to get their first look at the new space. When you enter, you start out in a rather unassuming old lobby that still retains much of the architecture from the Amory’s 1935 construction date.

However, once you make the climb up the stairs, everything changes. You’re greeted by an absolutely incredible sight, as massive venue with a roof hundreds of feet in the air, with bright lights that permeated every inch of the massive open room, and the soft glow of the bars and VIP sections off to the side, that just added to the overall aesthetic.

Kill the Noise started off the show with his usual heavy hitting music playing hits like “I Do Coke,” “Kill It 4 The Kids” and “FUK UR MGMT” It was probably the hardest hitting set of the night in terms of the intensity of the music. I mean with name like Kill The Noise, you have to live up to your name. He also threw in a nice “Dark Souls” reference in there (killer reference.)

Next up was Texas based Tritonal, who brought the endless energy to the Armory. Songs like “Getaway” and “I Feel The Love” brought the good vibes and their new single “Call Me” got the crowd singing along. Jumping off the set, waving their flag, shooting the smoke machines and rallying the crowd punctuated every single song. With a space like the Armory, the stage was large enough for artists to do pretty much anything they wanted to do and more. Tritonal took advantage of this, and really played an authentic and fun set, that really got the crowd involved.

Finally, the Seven Lions took the stage right before midnight, and put on a show that seamlessly mixed the styles of pop, dubstep and trance. Songs like “Strangers” brought the pop with Tove Lo doing the vocals, while “Freesol” brought the dubstep and trance to the stage. The whole set with filled with enigmatic videos that were almost like miniature stories, it really kept the show especially captivating. The set continued all the way until 2:00am when Seven Lions and Kill The Noise came out to end the night with “Cold Hearted.” An absolute heavy hitter.

I’m actually still geeking about how amazing the experience was and I will say it again: The Armory is what the Twin Cities music scene needed. Our cities for too long, had a gaping hole when it came to large music centric venues. We had plenty of small clubs for the indie acts, medium size music-centric venues for a vast majority of other acts and stadiums to handle the massive acts. However, we did not have anything that was totally designed for large artists to make their splash on the Twin Cities. The Armory has drastically changed the music venue landscape in the cities. I am excited for it’s future in downtown in Minneapolis. Every music fan needs to check out this venue the first chance they get. You’re in for an unforgettable night.