The good news: We got a third day full of 80’s rock for Grand Casino‘s Grand Rocktember Fest. The bad news: Well, a couple of things. First, they scheduled day 1 on a Thursday and it’s hard to get people to show up for a Thursday concert, especially with an early 4:00 PM start time. The bad part 2: (Or is it good?) Sounds like the 3-day Festival experiment is already over and will go back to its 2-Day (Friday, Saturday) roots in 2019.

Day 1 didn’t start out very good. I arrived just before 3:00 PM for the 4:00 PM Start. I figured I’d get my credentials and be in the door in a few minutes as the will-call line was short. That didn’t happen. I felt so bad for everyone working box office/entry, because the credit card machines and ticket machine(s) weren’t working. It took close to 90 minutes to get through the line and the people around me were being so rude to the employees. I finally made it into the amphitheater as the opening band Vain was playing the last song of the set. 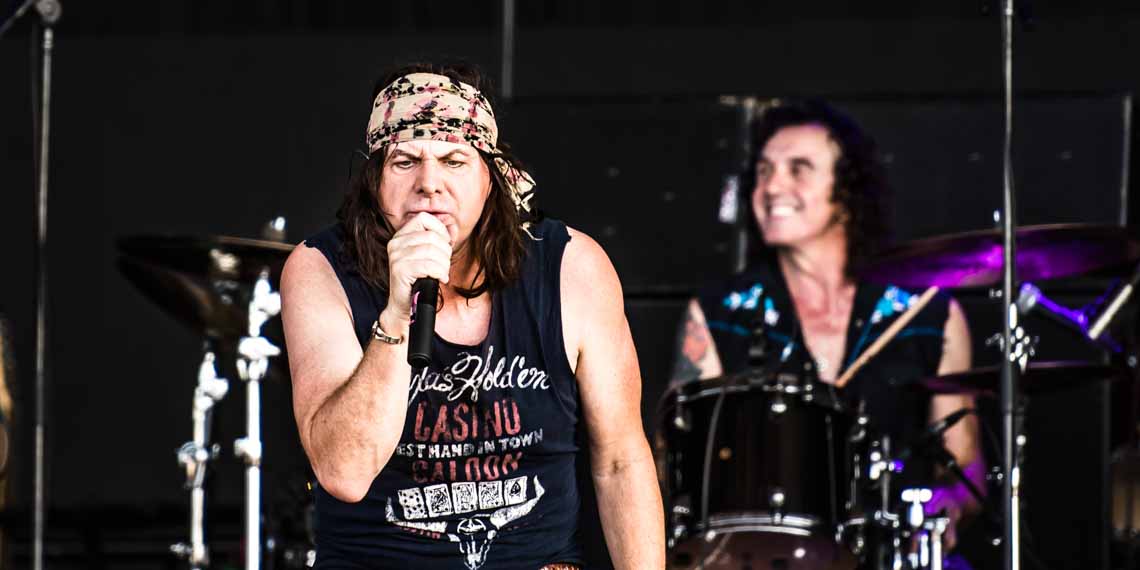 Day 1 featured music from 4 Bands. I missed all but one song from the opening band Vain who formed in the mid 80’s and made a small splash on their debut album No Respect. I’m not sure what happened, but they pretty much just disappeared after that.

Eric Martin from Mr. Big fame was next up. I’ve seen him a few times over the years, he always puts on a solid show. You can always expect a fan sing-a-long when he starts to sing either a Cover of “Wild World” by Cat Stevens (both Cat Stevens and Mr. Big had success with this song) or the Power Pop Ballad “To Be With You.”

Just for good measure, Eric Martin brought Steve Brown And PJ Farley from the band Trixter to play guitar for him and to sing a couple of Trixter hits, including the #1 hit “One In A Million.”

Next was Great White! This is my 2nd time seeing them this year, and this time they had Mitch Malloy on lead vocals. They exhibited tons of energy and Malloy had a great stage performance. I still prefer the original singer, Jack Russel, over Malloy though.

I haven’t seen the Day 1 Headliner Skid Row in about 3 years, they also have a new lead singer, bringing in ZP Theart into the mix in 2017. Three years ago Skid Row put on a great show, they also played all the hits including “18 And Life”, Youth Gone Wild” and “Monkey Business”. I still believe the previous singer Tony Parnell and original lead Sebastian Bach are better suited for their sound.

Day 2 started out with the Chris Hawkey Band drifting away from the Country Side of music for which they are known for, breaking into the semi-newly formed 3 decades of rock. Chris and his band usually put on a great show and this time was no exception. They did throw me for a loop though coming into the show with the song “North Country” from Chris Hawkey’s former Country/Rock Band Rocket Club. Don’t worry he played covers of rock hits spanning the 70’s through the 90’s, Including songs from Iron Maiden and REO Speedwagon while ending the set with “Fat Bottomed Girls” by Queen. Good thing Hawkey has a good vocal range, that’s a tough cover.

What can you say about the band Kix? They had one album that was a huge hit, even though a couple of other albums were considered better by many people. So what do they do? The smart thing, that’s what. On the 30 year Anniversary of the hit Album Blow My Fuse, they played the album in its entirety. Guess What? The Fan’s absolutely ate it up. Amazing how good lead singer Steve Whiteman still sounds to this day.

Winger came on next and he had a full band with him this time, for one reason or another over the last several years it was just Kip Winger playing solo. It was finally nice to hear him play the hits supported by a full cast, including the song “Seventeen” reworking they lyrics to include most fans current ages. Hilarious.

Christian Rock Band Stryper still sounds great to this day! I love it when bands sound like they did early on in their careers(unfortunately most don’t). Lead Singer Michael Sweet lead the way through a few songs from the new album God Damn Evil along with several hits including “To Hell With The Devil” and a song I hold personally to my heart to this very day “Honestly“.

This is where it gets a little difficult. Headliner Scrap Metal came on stage and absolutely crushed it, only thing is that it was not all of them. Scrap Metal is a revolving All-Star Band that is formed around The Nelson Brothers(Both Matthew and Gunnar). This time around the rest of the starting part of Scrap Metal included Mark Slaughter(Slaughter), Lita Ford(Solo, Runaways), Barry Goudreau (Boston), along with Mark Holt, Gary Corbett, Mike Vanderhule, and Howie Simon. Each lead singer rotates in and out playing some of their most popular songs. So many great songs from this portion of the group. If you get a chance see these guys! Absolutely amazing.

Now for the 2nd half of Scrap Metal! To be clear this was a Dokken Reunion! They even broke down the stage to set up for the mostly Original Dokken Band featuring Don Dokken, Wild Mick Brown and George Lynch, along with current Dokken Members Chris McCarvill and Jon Levin. This was the first time Don Dokken had played with George Lynch since a few select shows over in Japan back in 2016 and before that was somewhere around the late 90’s.

Great job all around from everyone in this Mini Dokken Reunion. Don sounded better than I have heard him in the last several years. George Lynch was George Lynch… Enough said! And Chris McCarvill stepped in wonderful to help Don on vocals especially on the high end.

Day 3 started with Hericane Alice, another band that I haven’t heard from in a while. A fun band that gave a pretty good show! They couldn’t have been nicer to the fans signing Autographs and posing for pictures, not to mention they spent a good chunk of the night watching the other bands in the GA Pit with all the other fans.

The Band Tuff, sorry this group did nothing for me. It was like a combination of old-school rock along with Kid Rock songs that were butchered. 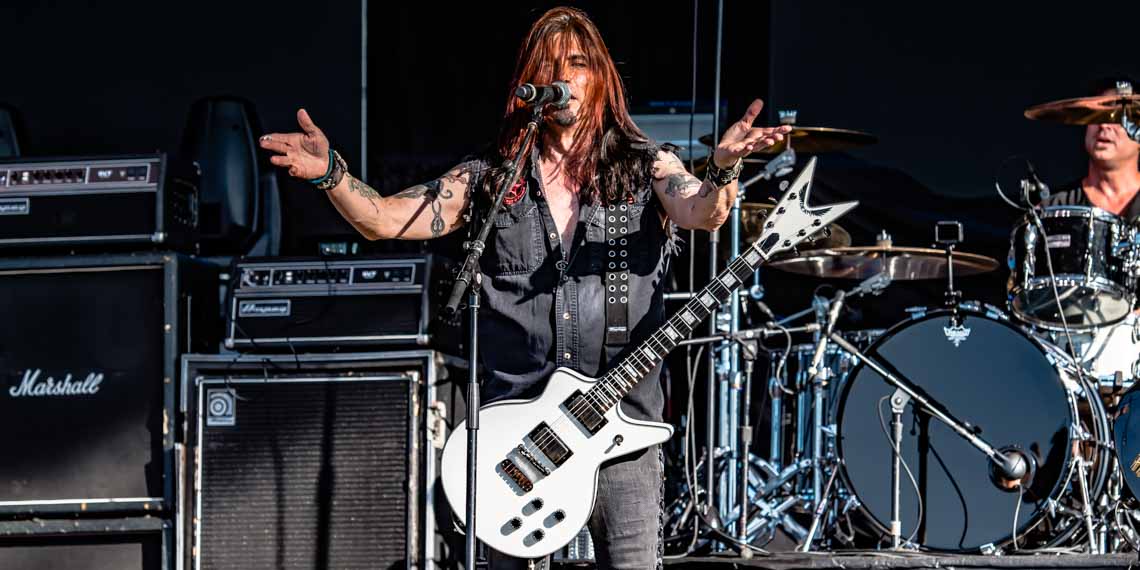 Autograph came on next as the crowd started to fill the bowl up. An entertaining group that sounded pretty good, I just don’t know any song’s beside the Rock Anthem “Turn Up The Radio”. Today was a great day as in the bands that played before them, they also went out of their way to sign Autographs(No Pun Intended) and take some selfies.

This is the second day we get to see Guitar-God George Lynch! This time it’s with his own band Lynchmob. Everyone got to hear some of the more popular songs including his top hit “Wicked Sensation” along with all the great guitar work from Lynch. 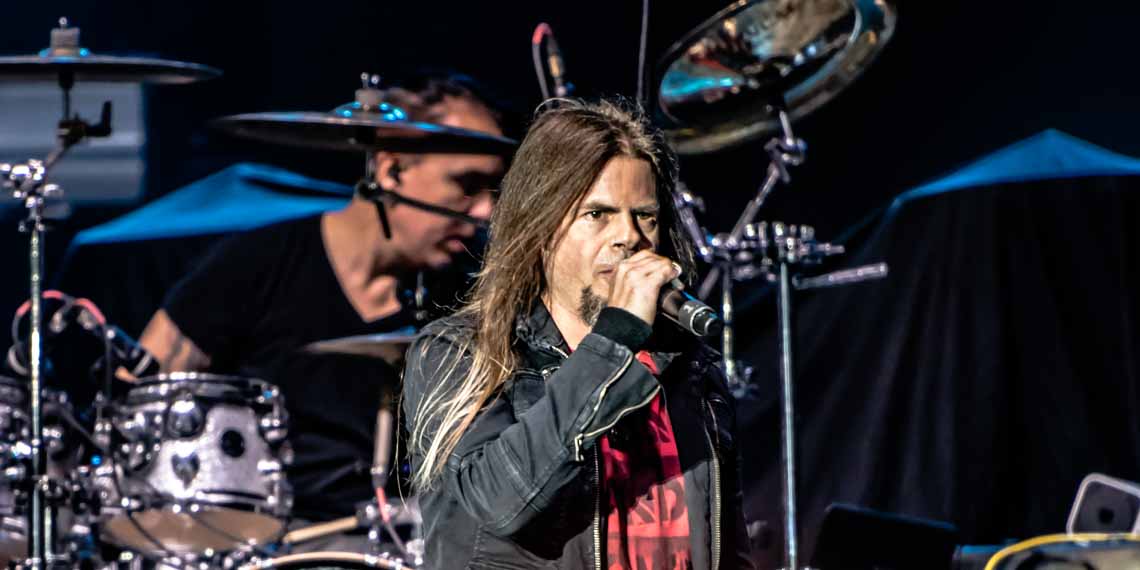 Now the place is packed as the final two bands prepare to come on. Queensryche hits the stage, and they don’t disappoint. Great set full of hits that blend in wonderfully with a few songs that may not be huge hits but sound better live than the studio versions. The addition of Todd La Torre was a great addition for lead vocals. I think he sounds better than original lead singer Geoff Tate(gasp) on most songs, just not the hit song “Silent Lucidity“.

The final show of Grand Rocktember is upon us. Tesla starts out with an all Electric Set to get the crowd going, featuring the hit songs “Heavens Trail(No Way Out), and “The Way It Is”. The Audience was swaying side to side as the band stepped it back with an Acoustical set featuring the songs “Paradise” and the hit song “Signs” originally sung by the band 5 Man Electrical Band.

It was a complete night of either foot stomping, singing, dancing or just swaying to the music as Tesla brought back the electric guitars came to finish the night out with several hits and a couple changes in tempo. Starting out with “What You Give”, Edison’s Medicine(Man Out Of Time), slowing it down for the sing-a-long “Love Song” before bringing the roof down(Open Sky?) with the songs “Little Suzi” and “Modern Day Cowboy“.

Grand Rocktember started out slow and ended with a Thunderous Applause. Could it have been better? Sure, most shows could. Keep the 3 days and move it to a Friday, Saturday, Sunday show would be the main thing. Other than that the Grand Casino Hinckley crew did a great job. Even fixing the problems that plagued them early on in the festival. Let’s see what they have in store for next year.