After listening to Ferry Corsten’s album for weeks, I was pretty pumped for his show on Saturday at the Rev Ultra Lounge. However, I did not expect to be walking into a fancy restaurant looking for a venue for a world-known DJ to perform was comical at best. I’ve always liked a little contrast in my life experiences.

Rev Ultra Lounge is pretty sleek except for its low tile ceiling. The screen wall full of lights well makes up for it, as does the small, intimate dance floor leading right up to the DJ booth. While the room was quite empty upon doors opening, it became a decent crowd by 11pm. I haven’t seen many venues where one can walk right up to the DJ booth and be mere feet away from their face.

Walking into a great set of EDM is enticing already, but hearing a saxophone with it blew me away. A great combo and I would have never imagined it myself. I was captivated by how well they played together. JT & T perform there often and for good reason.

The Ragebeards came on wearing matching shirts and, well, matching everything- even up to their beards & long hair. These guys were very amusing to watch. They upped the bass and volume while the people poured in. They danced to their own set and we were putty in their beats that kept building up and up and up.

As if holding steaks on stage and we were the lions, we mimicked their every move. Beard twins pumped their fists, we pumped our fists. They jumped, we jumped. The crowd were not only here for a Saturday night filler, they were here for the music. Shoulder to shoulder we danced while bumping into those around us, but this isn’t the scene where anyone seems to care. Ragebeards’ shirts read “with great beard, comes great responsibility”. Great beards they were, indeed, but even better was their set. We are pumped and ready.

Ferry Corsten finally appears and slides effortlessly into his set, shaking the hands of the fans in front of him. It’s undeniable that he appreciates his fan base and values their support. He starts as with the track “Reception” from his newest release Blueprint. A well established trance artist and he is still bringing solid albums to the scene.

The crowd comes even more rhythmically alive than before. Moving and dancing nearly identically. We watched, entranced, all staring straight ahead at Ferry Corsten. People wave money in front of his face and a girl waves a cd around for a while before he finally takes it and signs it with his genuine grin. He gently waves off the others starting to hand him things to focus on his set.

The EDM crowd is a tightknit one. They seemed to want a similar experience of emotion and pleasure so they all worked together to help each other. If someone got rowdy, others gently stepped in. A couple of friends convince their overly zealous friend to stop talking to me. A strong fanbase for Ferry as they cheer through many songs. 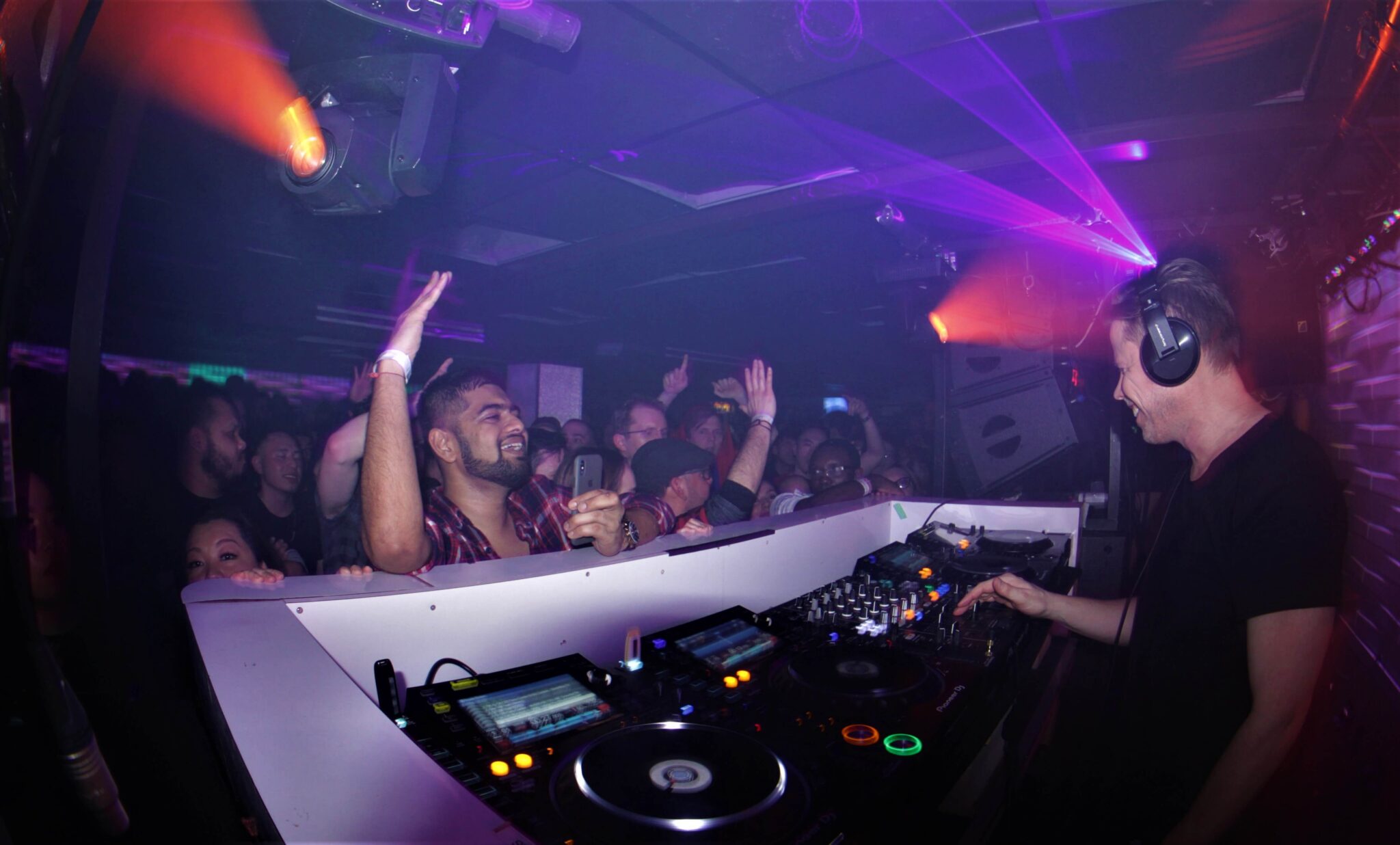 Hearts made from hands are visible through the lights, high fives constantly throughout the show. Another fan was so amped up he encouraged everyone to put their hands up in the air for Ferry Corsten because he is “the best in the world!” They want to feel the music all the way to their bones. They want to experience each song and escape their problems, escape the world and its troubles.

“Here we are (feat Haliene)” comes on and the crowd sings along. The look on Ferry’s face when he hears singing makes him grin even bigger than before. The crowd is so enthusiastic they start chanting along even when there aren’t lyrics.

Ferry breaks out in a grin at another fan as if they spoke of a decades old inside joke. It suddenly strikes me that it’s a language mostly spoken without words. In a society where words are often used to hurt others, its refreshing to be in an atmosphere filled with high fives, handshakes, and other made up gestures. Ferry makes eye contact with many of the fans that push their way to the front to express what their music means to them. He acknowledges each one in some way or another.

It’s almost 1am and “What are We Waiting For” comes on. The crowd somehow erupted into greater excitement as they all sang along to the lyrics, jumping in sync. They put their arms around each other and sway and dance and cheer throughout this song, clearly the height of the show, even chanting Ferry’s name to the beat.

It’s nearing the end and “Wherever You Are” (feat. Haliene) comes on. Sweet and sentimental, the tired crowd does not give up their enthusiasm. They continue to clap and cheer, knowing the end is soon. An uplifting performance throughout, the crowd begs for more, but alas, it’s 2am, the show must end. It’s clear that Ferry Corsten has very much enjoyed performing for this crowd as much as they enjoyed watching him.