Get to know Clay Borrell, a solo artist from Minnetonka, Minnesota. Never heard of him? Well, you’re about to. He just released a brand new EP titled “Lifeline”, which I am a fan of (especially track five, “Polite”). Like you, I didn’t know much about Clay, which meant an in-depth interview was in order. Check it out! 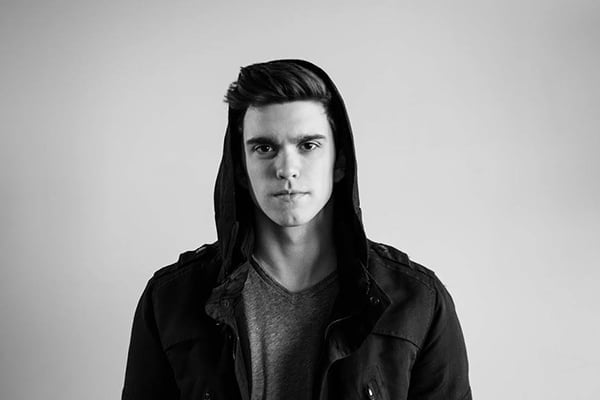 Q: Clay, how old were you when you began taking music seriously as a possible career?

A: I’ve been writing music since I was about 13 years old. I started taking it seriously at the age of 16 when I realized this is what I wanted to do with my life.

Q: Was it someone specific who encouraged you to pursue music?

A: My parents were a huge influence on me pursuing music, though neither of them had any musical background. My father played hockey through high school and college, and was drafted in the NHL in ’85. This of course made him want me to follow in his footsteps, but both of my parents were extremely supportive with whatever I chose to do in life, and still are to this day. Very thankful for that. Some other major influences were the artists that I listened to growing up (John Mayer, Jason Mraz & Brendan James) and their songwriting.

Q: You recorded your EP “Lifeline” in California, correct? Did you go into the studio with a handful of demos, then your team helped you choose your best five songs?

A: Correct, I recorded the EP in Santa Monica with Nico Stadi. I met him in a writing session in April 2014 where we wrote “Sorry for You” (track #4 on the EP). The writing session went so well that we decided that we wanted him produce the whole EP. But yes, I went in with a handful of demos out of which we picked three songs (Fair-Weather Friend, Make Believe, and One More Song). We then spent the last few days writing “Polite” and recorded it as we went along. Very happy with how the record turned out.

Q: How you were introduced to Stephanie & Richard Reines? How has their experience in the music industry helped build your brand?

A: Love this story. When I was 16 my friend Alex Ernst and I decided to enter the Doritos “Crash the Super Bowl” contest in which you create a 30 second commercial for a spot on the Super Bowl. We literally had him in a bathtub of Doritos. The video was in the top 5 for at least a month which is where Richard found Alex and reached out to him. After Richard told Alex he was an artist manager from LA, Alex told him that I was actually a singer/songwriter and also did a lot of covers on Youtube. Richard watched my videos and then reached out to me. About 9 months later I am out in LA with him and Stefanie recording my first single. They are great. They know everything there is to know about the industry and I have nothing but good things to say about them. Without Richard and Stefanie I have no clue where I would be right now.

Q: Are you planning a tour soon?

A: Nothing yet. We are solely focused on promotion and writing the next album. Touring will happen soon, though.

Q: Who are your favorite artists?

A: Damn, tough question. I listen to a lot of different stuff so I will just have to list by genre. Alternative rock: I have to go with The Killers and Nothing but Thieves. Electronic: I listen to a lot of RL Grime, Dillon Francis, Gareth Emery & Marshmello. Hip Hop: gotta go with the kid Mac Miller. Been listening since the 9th grade and I love pretty much everything he puts out. I’ve been listening to a lot of Meek lately as well. Singer/songwriter: John Mayer, Jason Mraz & Brendan James. I like Ed Sheeran a lot, too. Pop: I’ve always liked Andy Grammer. Another one of my big influences.

Q: Have you experienced any setbacks that has been difficult for you to overcome?

A: I wouldn’t say I have had to deal with anything major yet, but releasing this EP was pretty tough. We had a lot of problems with finding cover art, but I am very happy with what we ended up with. Shoutout to Paul Johnson and Cody Payne. Other than that, I’d say doing anything in the industry as an independent artist is pretty tough, but I have a great team and a lot of heart so I’m confident in the future.

Q: If music wasn’t an option for you, what would be your second choice career?

A: Honestly I have no clue. I’m really into astronomy & satellites, but I suck at math so that wouldn’t work out. I’ve always had a passion for creating, so I think I would have gone into video or ran my own website. I’m just very happy with where I am at, and I hope to see my career move forward a lot in the next few years. God put me here to make music, so that’s exactly what I’m going to do.
Check out Clay’s latest music video for his song “Polite”. Purchase “Lifeline” EP on itunes.