This is a stupid idea, but I’ve had it. I’m sitting on a porch in NE, it’s just about four o’clock, and my friend Ben Rat and I (it’s his girlfriend Lauren’s porch, she’s out of town for the day and the deal is we can hang out and drink beer on the porch while she’s gone as long as we don’t put any more cigarette burns on the couch cushions and leave the space cleaner than we found it and in general be good porch guests.

(Oh and by the way: it’s sunny out and there’s no traffic except for an older guy with a cool mid-life-crisis-colored convertible who keeps coming and going at the house across the street, but all this to say it’s a quiet mid-week summer afternoon and it’s prime time for a lazy hang on a couch on a porch) but my friend Ben Rat and I, we kind of need an excuse to bust open this case of Rolling Rock we’ve bought (he bought it) before five rolls around and so here’s my stupid idea:

What if we listened to the new Frogleg record front to back and chugged our beers every time there’s a guitar solo?

Ben finds this question pretty intriguing. I missed their CD release last week (I was tripping mushrooms and dancing at Surly, you can read about that here) and so I haven’t heard the record yet. It’s 3:52 PM. We’ve got nothing to do for the rest of the night and the album just dropped on Spotify. Okay.

Busy Checking In by Frogleg 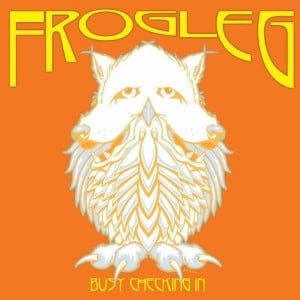 An easy opener, here. This song just kinda lays there and lets you watch it breathe for about 45 seconds and then opens up and shakes your hand – nice to meet you.

Hey, Mama. There’s a modulation on the back verse that really wraps this short tune up nicely. Up a minor third I think, don’t quote me, I haven’t cleaned my ears in like a week (note to self: buy q-tips)

TRACK THREE: “Up In The Blue”

Gypsy-blues stop-time opening, then a drum fill, and we’re thrown out of the kitchen and into a down-tempo minor waltz and it’s raining out here and we languish in it, for a moment, and then CHORUS – a pretty girl smiles somewhere (she’s got crooked teeth) and then HERE is a sweet guitar solo like butter on bread better flip the beer bottle bottom up and glugluglug…

That solo was a minute twenty. This may have been a bad idea.

Hand drum jam to start. Every record should have hand drums on at least one song. The world would be much kinder. We get a guitar solo pretty quick here. Burp. Keys get a solo too and we get hints of montuno and Latin rhythms. Tastes good.

Big Santana vibes right away here and I’ve finished beer two before the first verse even hits (does an intro really count as a guitar solo?) and there’s barely time to continue my conversation with Ben (which has inevitably wound its way past the topics of Work and Mutual Friends and taken a hard left down the alley into Sex, Girlfriends, and Exes) before there’s another solo. This song is long, and the last minute or so is just wild saxophone adrenaline and I can hear the whole band sweating.

This. Is. Baby making music. Heavy half time groove with harmonized sax melody and doubled vocal/guitar for the first verse. Eerie organ crouching quietly in the back. I’d live here, in this song. It’s pre-furnished and the rent’s not bad and the carpet is smooooth.

This is an old song. Ben and I have heard it a hundred times. We’re nostalgic now, reminiscing. We used to all pour whiskey-gingers and gather up all the guitars (and an acoustic bass and a banjo and a drum pad and a mandolin) and sing this song. Only one or two guitars had all six strings. Oh, college.

Uh-oh. That was six straight minutes of jams. I am certifiably a plus drunk. The f-leg boys cut fast and clean and washed us out. I just took a pee in the back yard. Bladder’s empty but my heart is full. Smooches.

We made salami sandwiches. I told a really good joke but I can’t remember what it is quite yet otherwise I’d tell you. Track nine here is about getting busted with pot. Damn, Johnny, chill out. 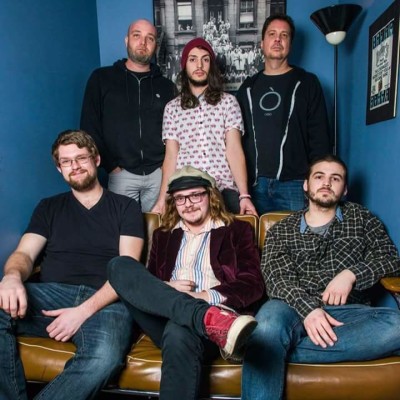 Found the blues, here it is. Smell it? And a guitar solo over the twelve bars midway through the song, our Rolling Rock is just about all gone now. I’m swaying on this couch, smiling. So is Ben. I don’t think either of us has said anything for five or six minutes. Here’s a truth: seventy-five percent of the time that you’re alive should be spent listening instead of talking. That would make the world would much kinder.

If you want my honesty, I’ve mostly forgotten about my drinking game by this point. There’s more important fish lined up by the fryer. This song has the best bass line of the whole album, for one – It’s simple, functional, supportive – or maybe I’m just actually listening to the bass consciously for the first time tonight. For two, I’ve come up with a good genre for Frogleg – kind-jams. I’ve coined this term, at 4:58 PM, it’s on the record.

The beer’s all out and the record’s all spun so I’ll leave you with this:

I’m leaning past seven and stretching over into eight’s territory if we’re applying a number scale to my state of inebriation here, but I’ve got things I need to tell you so bear with me. The thing that’s struck me hardest about this album is what I’ve decided to call its implied sidelines. This album is ripe with peripheral content.

For the past hour, I’ve been pontificating about kindness. How can one be kind to oneself and others. How can one make the world more kind? I don’t have an answer. But I will tell you, it’d be a futile act to try and pry even one iota of anger or misanthropy from me right now with this album in my blood.

Music can change rooms, can transform conversations, can mediate debate, can elevate thinking. And this music is kind. Listen to it, it will make the world a little more kind, I think. And it wouldn’t hurt to drink some beer with your friends and enjoy a nice summer evening, either.

Writer and reader in Minneapolis, Minnesota

Writer and reader in Minneapolis, Minnesota