The intimate and charming performance space could barely contain the overflow of talent and enjoyable moments as Bad Monad, LOON, and Blurcurve chipped away at the sanity of serene landscapes, a setting spring sun, and well-tended lawns that surround the coffee house and record store.

If you’re looking for an up-and-coming Twin Cities band to delve into, you may want to familiarize yourself with Bad Monad. The three-piece group has been refining their act in clubs and bars this year, playing over a dozen shows since the holidays.

Their sound lands somewhere in the region of guitar-heavy, anthem-minded wails of early 70s arena rock and progressive, technically minded players like Rush. However, Bad Monad really shines when they stretch out and explore the fringes of these genres. There are moments when the band finds something all their own and earns themselves a collective smile. 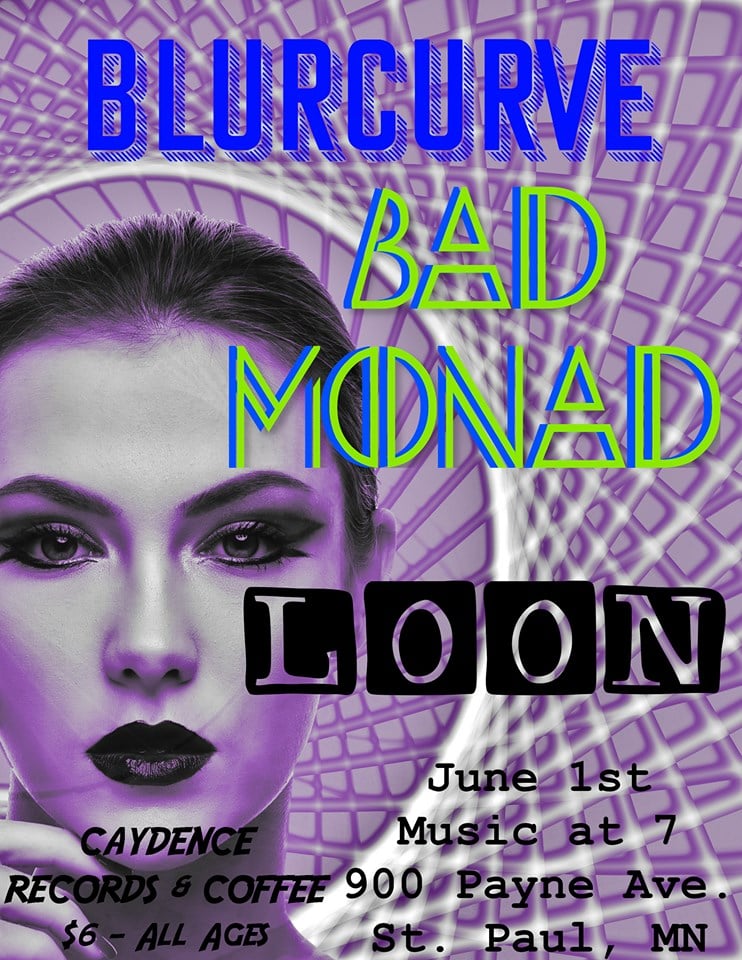 Guitarist/Vocalist Taylor Nelson and Bassist Sam Wehde have been playing together for years. Some of Bad Monad’s songs predate drummer Marty List-Tesdell but, in the past months, their sound as a cohesive unit has come a long way.

Each member plays with confidence and wild technical ability. Longer stretches of their more instrumental songs, like “Spec of Dust (Parts 1-4),” seem to provide the most opportunity for the group to work together as well as earn their individual moments.

When Bad Monad really leans into a section, moving beyond the limiting structure of fills and solos, one can understand and appreciate the musicianship and camaraderie of the trio. They aren’t a jam band, but frequent improvisational moments are highlights and one wouldn’t be put off sitting in on the brainstorming session behind some of the well thought out arrangements.

The lyrical style is another element with which Nelson toys. He doesn’t have the crazy falsetto of some of his influences, but his underused metal growl is impressive if not sustainable. The lyrical content ranges from philosophical mysticism to everyday trivialities. Again, in the vein of Rush, you’ll hear things like “I am the philosopher, I think therefore I am. I think because I can” and (not in the same song) “breath with your mind,” which only add to the appeal of the deadpan delivery.

Strangely, one of their more enjoyable and accessible tunes is the catchy “Come Get High (on Music),” which features a twangy, western opening riff and gleeful insinuations.

When Bad Monad fire on all cylinders, the audience can tell. These moments usually come when they get creative or silly, and as their confidence develops their talent and presence will solidify to make these moments more common.

Opening the show was a newer ensemble, LOON. The quartet featured Nelson doing double duty for the night, this time on drums, and a powerful lead vocalist whose pitch-perfect delivery in the small space, without a direct monitor, was a testament to both her confident stage presence and the Caydence sound engineering by Gregg Schmitt.

Rounding out the bill, and truly pushing the auditory and spatial limits of the coffeehouse, were the more established new metal rockers Blurcurve. Their stage setup featured a guitar stack that nearly reached the ceiling. Extra cymbals and a double bass kick were added to the communal drumset. The resulting fury seemed a fitting outlet for the boundless energy of the group and the confessional vocals of singer Alythia Erin.

Scott Bryan is a writer and adventurer. He has penned the books This Book Will Make You Go Crazy and Yellowville as well as the script for the independent feature film, Drunk. Now he goes to shows and runs the website getitawayfromme.com.

Scott Bryan is a writer and adventurer. He has penned the books This Book Will Make You Go Crazy and Yellowville as well as the script for the independent feature film, Drunk. Now he goes to shows and runs the website getitawayfromme.com.