Fires of Denmark’s first full-length album With Love is an expressive gem that doesn’t back down from yelling emotion, heavy distortion & guitars, and a variety of fascinating musical solos, all while being fairly slow and in the moment. This album feels and it isn’t afraid to be a little vulnerable, despite its alternative vibe. It is finally now released, after a fully funded (and more) GoFundMe campaign. It is on most streaming services and available on Bandcamp.

With Love is an independent project created and recorded entirely by Mike Terrill in his basement. There are some guest solos by local musicians that add amazing touches to the album. This project is quite different than Mike’s other bands.

Though his musical talent, passion, and joy in playing music are apparent in each role he plays in the other bands, this album blows me away by, as his first solo project, using such creativity & varied abilities. I get lost in the songs and forget my surroundings, which is nearly unheard of in my busy household. I look eagerly to the next track as if unwrapping gift after gift.

The vocals are free & flowing instead of overly forced. Most of the vocals are distorted with special microphones and feel like a distant memory of somewhere I’m longing to be. The songs feel nostalgic and dream-like. I find I want to repeat again and again. The distortion on the guitar and other instruments all come together in a fascinating musical art form. The lyrics are not to be forgotten nor lost in the haze; they are as inspiring as the layers of instrumentation.

Some songs are mellow with a lazy sit-on-the-couch vibe and some are surprising with staccato beats & great synth lines. With Love will constantly feed you new sounds in all sorts of layers to pay attention to. I’m fascinated by the culmination of familiar styles brought together in an original way.

This album could be described as fitting into many genres, such as a shoegaze type of electronic rock, as psychedelic rock, or alternative rock. Too often, artists fall into making every song sound like a specific trend. It’s refreshing to hear Fires of Denmark use modern trends of synth mixed with tried & true styles of the past to the album’s advantage. 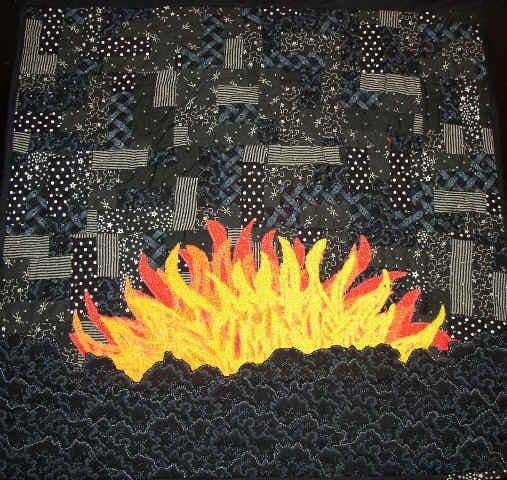 Here is a discussion and unpacking of each song on With Love :

The album starts off as a fade into a dream, a fuzzy good dream from which you won’t want to wake up. It’s a short song to start off the album with an introduction to the sweet synth lines that make appearances in a couple other songs. Notable lyrics are “Wait…. For every single day to pass you by.” I think of how some people seem numb to the days and weeks that pass us by filled with working, meals, and sleep, more or less – the monotonous routine. This leads to doing something with free time that brings more meaning to life.

The song starts with an alluring synth melody by Chris Kostelec of Mottle. The vocals come in low as the synth bring me high, a great combination for a song that lingers on the mind. Halfway through the songs between the verses, the guitar comes in for a solo with heavy reverb effects. “Lost in Light” stands out as one of my favorites. Intrigued by this: “Looking for your pride, you left back with your thoughts”, I’m amused by how perceptive to the human mind these lyrics seem to be.

I’m plunged into the depths of this translucent journey of this album. It is a slow delight with especially distorted vocals and overlapping carefree melodies over the lightly grungy guitar. The riffs grab me in the way that vocals usually do.

This title track definitely stands out among the others. It’s notable lyrics: “Nothing ever going to make it better, It’s something you have to choose.” This speaks to me about the struggle to choose a new path when the one I’m on isn’t working. To choose happiness when things seem to be hard.

This song starts off sweet & somber. About a minute in, distorted guitar comes in and adds a nice edge. The lyrics get more intense here before the excellent transition to the saxophone solo by Nick Novotny from Loud Mouth Brass. The heavy guitar comes back in with its heavy distortion in a splendid compliment to the saxophone.

The album takes a turn here for a slightly different sound. The strong and emotional vocals pair well with the guitar solos. I feel goosebumps at the height of the song nearly every time. The raw emotion I can feel from this song jolts me from thinking about anything else.

This track may be my absolute favorite.

This track may be my absolute favorite. It has an attention-grabbing beat that’s a bit more staccato with wandering vocals calling out. To who- the world? Himself? This song is a puzzle I want to disassemble and put together again, hearing all the idiosyncrasies, gaining an understanding at a deeper level. I particularly like the fuzzy guitar riffs. The lyrics are open enough to lead to many ponderings. I particularly like the lyrics “don’t compare and you’ll know what it means to be…. ‘cause ain’t nobody you.”

This static heaviness is likely one of the most intense parts of the album. It’s like an abstract collage of many colors & textures – a mess that somehow makes sense. The guitar layering is so intense it simply feels good. It sounds best with good speakers or headphones & turned up!

A quieter track focused on simplicity. The guitar leads with a great pedal effect while carrying the quiet singing like a slow path through foggy streets. The lyrics capture me, “So thinking, you wander here or there. Ceaselessly, distractedly you. With your love, I know they can give it up.” I see others around me in life sucked in so many distractions with our indulgent social media culture. It leaves us forgetting who we are, or constantly searching for who we are and where we fit in.

The lyrics seem to point to breaking this routine, “With your love” and support around us, we don’t have to question ourselves so much, we can be who we are and let that shine brightest. The trombone solo fits so well right after these lyrics. It is performed by John Sievers, also from Loud Mouth Brass. The clarity of the trombone crooning leads us out of the fog of distractions and worry.

The song has calm, gentle guitar strumming. I can hear the instruments differently, like the cymbal’s rhythm, because this song is not as distorted as the others. It seems to be almost whimsical, hoping and longing but still remaining in the moment. These lyrics stand out to me, “As you observe the world, trust your inner eye.”

This is an excellent ending to With Love. The extra-elongated vocals seem to match the title of the song and the lyrics themselves, which are short but vague, leaving mystery to them. I tend to focus on last songs, being an album listener instead of a single song listener, and this one finishes big. It’s an emotional release without being too much or too vulnerable.

It is in a similar style to my other favorites on the album “Ten Thousand Things” and “Something To Be.” The fade out gives me goosebumps again, surprising me since I tend to warm up to new music slowly. 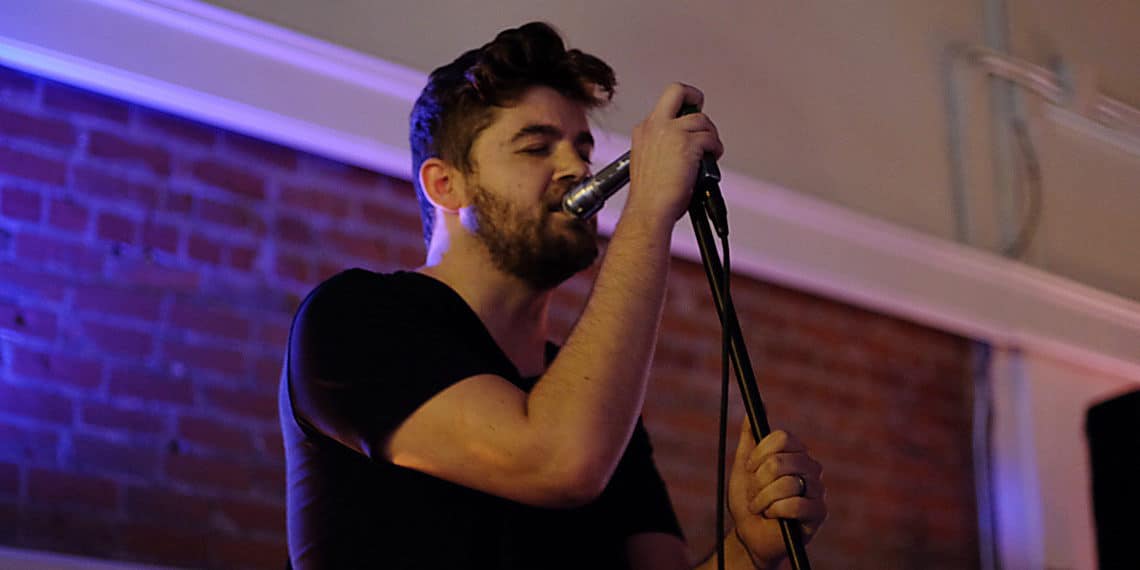 I was lucky enough to make it to the album release show at Canvas and Chardonnay in Rochester. It was a great spot for an intimate show like this. Mike enlisted local musicians Nick Truxel on bass and synth and Garrett Kolb on drums to help on a number of the songs for this live show.

The show was harder rock than the album, which is something I usually hope for with live performance. It was an exceptional experience that delivered a similar all-encompassing vibe as the album. They played through the whole album in a different order. “Give Me Time” was amazing live, with the vocals performed spot-on.

“With Love” and “Something to Be” were also excellently played. The show was full of guitar solos and jamming out.  He pulled out different microphones and used a variety of pedals to change up the sound. Mike played two very special last songs as a mini-encore. The first was “Family Tree” from his project with Nick Truxel called Versus the Lion. A rarity to hear it live as it came out 10 years ago. It was quite a special treat. The last song was a memorable sing-along cover of the Beatles “All You Need Is Love”. 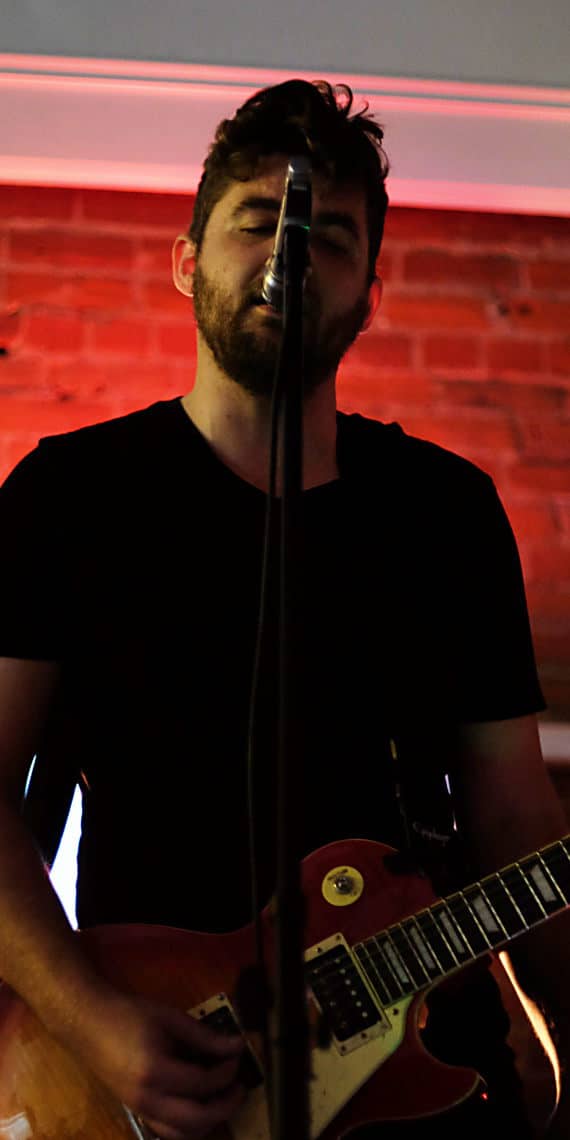