Like a racehorse out of the gate, Barbaro is starting off 2020 with a surge. Their first full-length album, Dressed In Roses, will be released tomorrow, and on January 24th they will celebrate that release at The Cedar with Chicken Wire Empire and local darling Humbird. An electric blend of bluegrass, country, jazz, and chamber music, Barbaro is a front runner in the Minneapolis “newgrass” community. This unique blend of original, crafty songwriting makes them an odds on favorite for a breakout year.

A Conversation with Barbaro

MIM: 2018 was a big year for Barbaro. You won the John Hartford Memorial Festival Band Contest and the Minnesota Bluegrass Roots Band Contest and released your first EP. It seems like with the bluegrass genre, winning a contest holds more value than other genres. What have those 1st place finishes done for the band?

Rachel: I think it’s just like reassuring that other people recognize and appreciate what we’re doing. On top of that, we’ve gotten some really great opportunities. We made some great connections, met some really good people, and connected with some cool venues. The bluegrass community is really small, so anytime you get yourself out there, it’s going to be a good thing and connect you to the people that you’re going to want to be meeting and interacting with.

MIM: You all have been touring around in support of this album. Is there comfort in coming back to The Cedar for a hometown release?

Kyle: We don’t play Minneapolis very much. One, we wanted to make an effort to not over-saturate the market and two, because it can be more fun if we can try and do more special events like this. So getting a room like The Cedar, we are really excited about it because of the history there. The people who work there are great and then the room is a really nice sounding room. They have the seating option, which will make it more intimate as well.

MIM:  Your sound sets you apart in the bluegrass community. From Jason playing classical bass with the Des Moines Symphony, to each of you having a wide range of musical influences, how do you make everything sound so cohesive as a band?

Rachel: We all are good listeners. We try to be really tasteful and when we are writing our own parts or Kyle comes to us with a song or Isaac has some lick that he’s coming up with, we’re just playing what is interesting to us and what sounds good in that moment. We don’t have a recipe that we’re following.

MIM: You’ve described your sound as “newgrass.” What does that mean to someone who hasn’t heard your music?

Rachel: Bluegrass refers to directing people to a pretty specific time and place. So you get all these different acronyms and mashups of things that capture the spirit of the instruments, the arrangements, some of the textures and the feel that you get. But also acknowledging that this is kind of straying away from when someone says the word bluegrass, which refers to a pretty specific sound. That’s not necessarily what you’re going to get from a band like us or from other bands who are experimental in their relationship to that traditional genre.

MIM: What was the most challenging aspect of songwriting with this album?

Kyle: I think the challenge with these tunes was that this was us discovering what we want to be or what we want to sound like. As a unit, we’ve been together for over a year and a half and part of the challenge was us figuring out how we play together.  Lyrically, the goal in my writing is to not tell the listener what it’s about necessarily, but give them some context or something to go off but then also leave that freedom to decide what you want it to be.

Rachel: (to Kyle) That’s something with your lyrics that I think is a strength of yours. You will give extremely concrete images, visuals, or sensory moments that are extremely descriptive and extremely specific. But again, it’s not telling you what it means or how you’re supposed to relate to it. So you have all these different kinds of vignettes that give you something to anchor to as a listener.

MIM: The album is filled with miniature stories in each little song, yet at the same time it sounds cohesive and all part of the same story. Is there an underlying theme or message you baked into the album?


Kyle: I tried to think of a good answer for that question, but I think really there isn’t. I a lot of these songs come from either moments in my life or snippets of time and feelings I was having at that point. Maybe collectively it speaks to my overall emotional state.

Kyle: I think that the cohesiveness comes more tonally and musically than it does in the message.

MIM: This is the type of music that deserves to be heard on vinyl. Was that something from the very beginning you were intending to do?

Kyle: I wanted it on vinyl from day one, partially just because I love vinyl, but then also with vinyl comes the responsibility to listen a little bit more. You can’t just put on a track and then hit shuffle. You have to ideally listen to the A side and then hopefully flip it over to finish the B side. I think that’s another approach where we’re really trying to get people to listen to our music and hopefully enjoy the process.

Dressed In Roses is a loaded release of 10 songs, feverishly rounding each corner of a complete album. There are moments of sober brevity in the lyrics, racing fiddle solos, charming banjo licks, and playful messages all covering a collection of miniature stories. As the first single, “Cold Stack,” opens the album with almost whimsical lyrics. Underneath the song lies an ambiguous tone of growing up and the struggle with responsibilities.

“Going back, back to the days when I was cold stack. Waiting to die on a the shag rug. Waiting to dine at the supper club. Oh, good god could I catch a break.”

“Rita Cline” gives us a prime example of Barbaro’s cohesive songwriting with a chorus that seems to melt into the song. The perspective Kyle writes from on the ‘damned young modern age’ is poignant, yet soft. “Aunt Betty” then ties in the catchy melody from “Cold Stack” and adds Rachel’s skillful fiddle parts. The sentimental parts weave throughout the song into a grandiose buildup at the end.

“Kawliga” is not a sequel to the Hank Williams “Kaw-Liga” love story, but instead written about Isaac’s cat. Yes, a large cat. Barbaro’s ability to swerve between heavier messaging to silly fragments of storytelling keeps you engaged with every new song.

This all culminates in the first real soft breath of the album, “Montanta, Oh.” As the name suggests, the big sky of space and the delicate production of this track work perfectly with the lyrics and the feeling of missing a loved one. Jason shares some insight into the intended production of that song.

“The big thing is listening to everybody and hearing what is needed at the time. That song was just really clear that what was happening was the space. It wasn’t even about the notes.”

Another gem on the album comes in the form of a song about the iconic Barbaro horse. Back in 2006, the thoroughbred horse won the Kentucky Derby and then shattered his leg two weeks later. It’s a beautiful yet tragic story on a life being lost too soon. The song is a tribute to living life to the fullest and making every opportunity matter.

One of the most anticipated performances I’m looking forward to seeing at the release show is “Mississippi Thunder Speedway.” As the only instrumental track on the album, the title announces this rush of energy. The song drives home the musicianship and abilities of the band. Jason’s bass parts, Rachel’s fiddle, and Isaac’s banjo are a warm swarm of strings.

The album comes to an end with “All Those Folks.” Arguably one of the best tracks, the closure of the album is as impactful as the opening song. It also contains a cryptic meaning that can be translated in a variety of ways. Personally, it feels like a song about the birth of a child. While boldly sharing this theory with the band, the exact meaning is still a mystery. 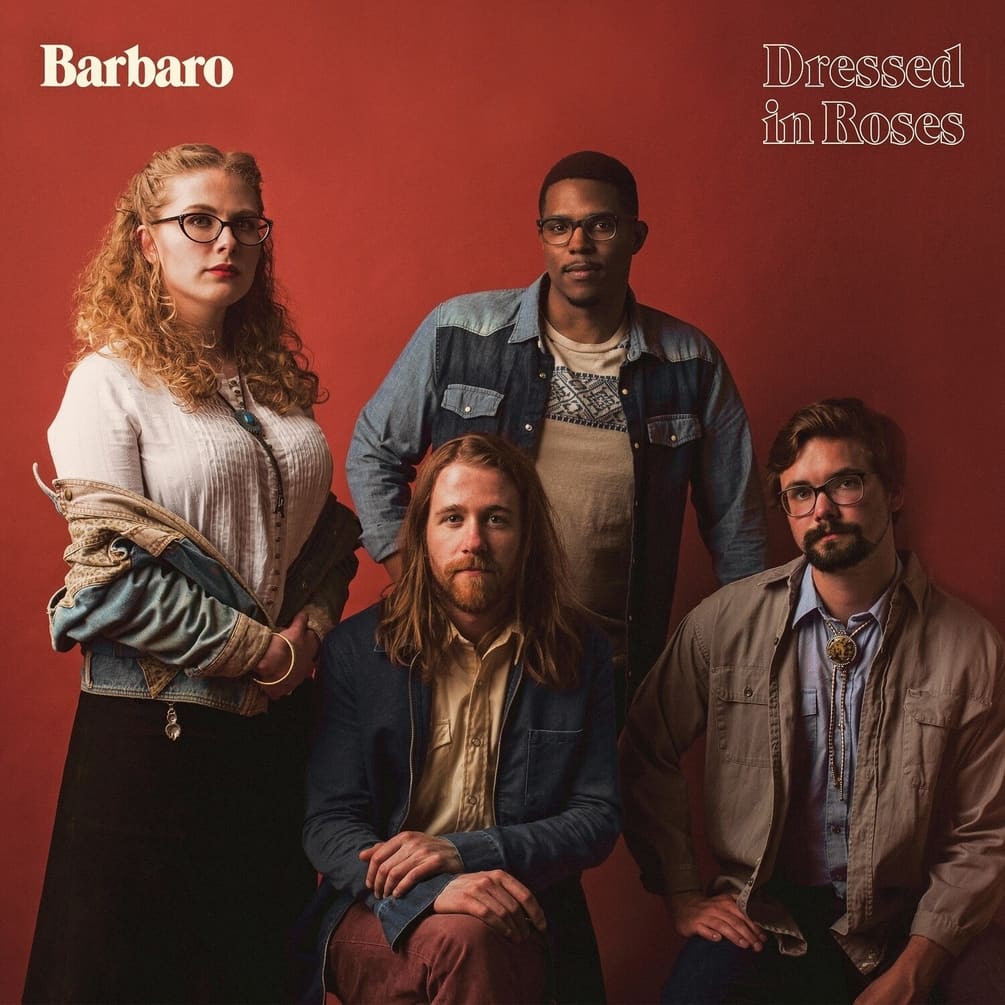 In speaking with Barbaro, there was an immediate awareness of the warmth and genuine respect they have for each other. So much of the performance of a band is the instinct and ability to play off of each other. It was apparent in my discussion that the musicianship and level of polish that Barbaro has will easily translate onstage.

Barbaro will be celebrating their release of Dressed In Roses on January 24th at The Cedar Cultural Center. Tickets are only $10 in advance and on sale here. I highly recommend picking up the vinyl record of the release.