Vince Staples seemed to stroll onto the beat, casually walking towards the front of the stage. He stared down the crowd as the hype grew, then flashed a few thumbs-up to the front row. Without changing his typically blank expression, he yelled “Y’all came to have fun tonight, right?” as we heard the beat of “FUN!” from his 2018 critically-acclaimed album FM! echo through the theatre. He counted down from three, jumped in the air, and hit every damn bar for the next 25 seconds.

Unlike his opener JPEGMAFIA, who gets his energy from extreme motion and volume, Staples gets his energy from his articulate and impressive delivery coupled with massive beat drops. The two seemed to be the perfect complement for each other, as JPEG prepped the Palace crowd by playing fan favorites like “I Cannot F****** Wait Till Morrissey Dies,” single “Puff Daddy,” and “Thug Tears”. He was very involved with the crowd as well, jumping down into the masses on multiple occasions. There was really no need for prep, however, as this crowd was more than excited for Staples.

With nothing but his often bass-infused beats to support him, Vince was alone on stage aside from the microphone stand he used for some of his more lyrical hits. Behind him were two giant, cracked vintage TV screens that switched back and forth between crowd footage and footage of Staples, who often paused mid-performance to have a staring contest with his larger self. Four smaller screens displayed random videos that included children playing, a newscast, and a couple very NSFW clips.

The most appropriate clip that was shown, however, was a short video of an intricate surgical procedure, as the Long-Beach native was conducting a sort of surgery of his own. Beginning with “Lift Me Up”, “Chipped”, and “War Ready” (which drew immense chants from the crowd), Staples captivated the audience with his nonchalant and tactical, yet aggressive, approach. The crowd stared as Staples ruthlessly delivered bar after bar, dissecting his own rhymes piece by piece in a blue and purple haze before the beat switch and impressive light show shook us out of our hypnotic state. “745”, “Big Fish”, and “Run the Bands” offered the Palace crowd even more reasons to go crazy. 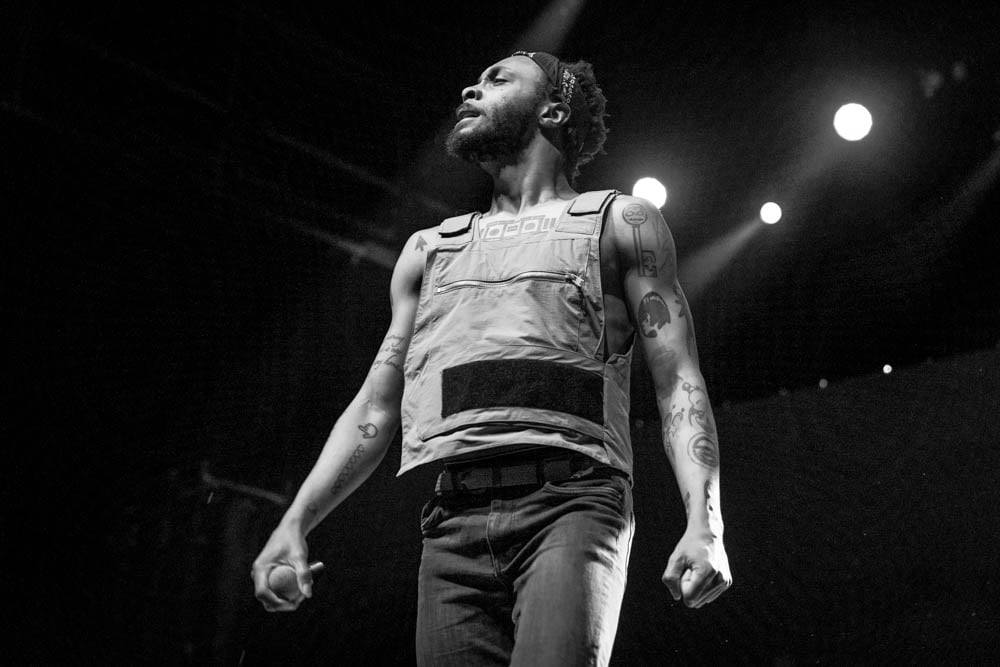 Giving the People What they Want

Staples wrapped up his hour-long set with a few more of his most popular hits, including Blue Suede”,” during which he pounded his chest while meticulously and precisely delivering lyrics like “Ask where he from then leave his dome roofless/ Sweet Chin Music kick back, gruesome/ Watch out for Judas, Vice and G Unit”. Staples then preceded to blast radio jam “NORF NORF” to another massive response, the crowd knowing all the lyrics (“B*tch you thirsty, please grab a Sprite”). Staples ended with the energetic and crowd-pleasing “Yeah Right” as he and the front row of fans traded chants back and forth.

Another Hit for Vince

Vince Staples’ first time at the Palace was a success. The crowd was in his hands from the beginning, and his truly mesmerizing and unique delivery was fascinating throughout. As if Staples hadn’t already won the night, he ended with a touching tribute video to good friend Mac Miller, for which the gratified crowd stayed long after Vince had left the stage.