Minneapolis-based EDM/Pop artist Chad Atkins has been a very busy man since August. After releasing his debut album, Stories, on August 25th, Atkins has performed a handful of dates with his Nice Guy Entertainment labelmates at various clubs around the Cities, as well as releasing a three-song EP last month. Now, Atkins finds himself on the brink of something even more exciting than all of that; his very first tour.

The Homecoming Tour is a three-date run of shows starting in Minneapolis, where Atkins currently resides and has spent years perfecting his craft, and ending in his hometown of Lincoln, Nebraska. Performing with completely different lineup’s in each city, every show is going to be an experience unlike any other.

In preparation for the tour, Atkins sat down with me to talk about his debut album, his favorite things about performing live, what’s next for him and his career, and gave Music In Minnesota the inside scoop on what we can expect from this tour.

MIM: How was the reaction to the release of your album?

Chad: I was blown away by the release. This is the most I’ve ever worked on an album, and it was so touching to have so many people come to me and tell me how much they enjoyed the music, either through its sonic qualities or the message that my songs had.

MIM: What is the significance of this tour?

Chad: This tour is very significant to me. It’s not going to last long, it really is only three days, but I’ve been wanting to bring my live set back home to my friends and family for so long, and the Nebraska show is going to have an enormous video wall with professional lighting so I’m stoked about that.

MIM: What is your favorite thing about performing live?

Chad: There are a lot of things I love about performing live, but making different live edits for the songs is a really cool aspect, it lets you, like, partially remix the song in a different way. I’m also a huge fan of getting to play along to the songs live, and of course, seeing a crowd connect with the music is priceless.

MIM: Is there anyone coming out on this tour with you?

Chad: Apart from Kelsey (Tour Manager), no one is really going on the tour with me, I’m actually meeting all the artists in each location!

MIM: Is this the first time you’ve performed outside of Minnesota?

Chad: I haven’t actually performed with him yet, but my friend Darkwood is an incredibly talented producer and performer, and I’m very excited to share the stage with him when I come home to Lincoln!

MIM: Have you been working on any new music recently?

Chad: I did just release a 3-song EP called the “With You – EP” not that long ago. Other than that, I’m kind of taking a creative break, but I have been tinkering with other ideas on the side, so as to when new content comes out, is pretty much up in the air. 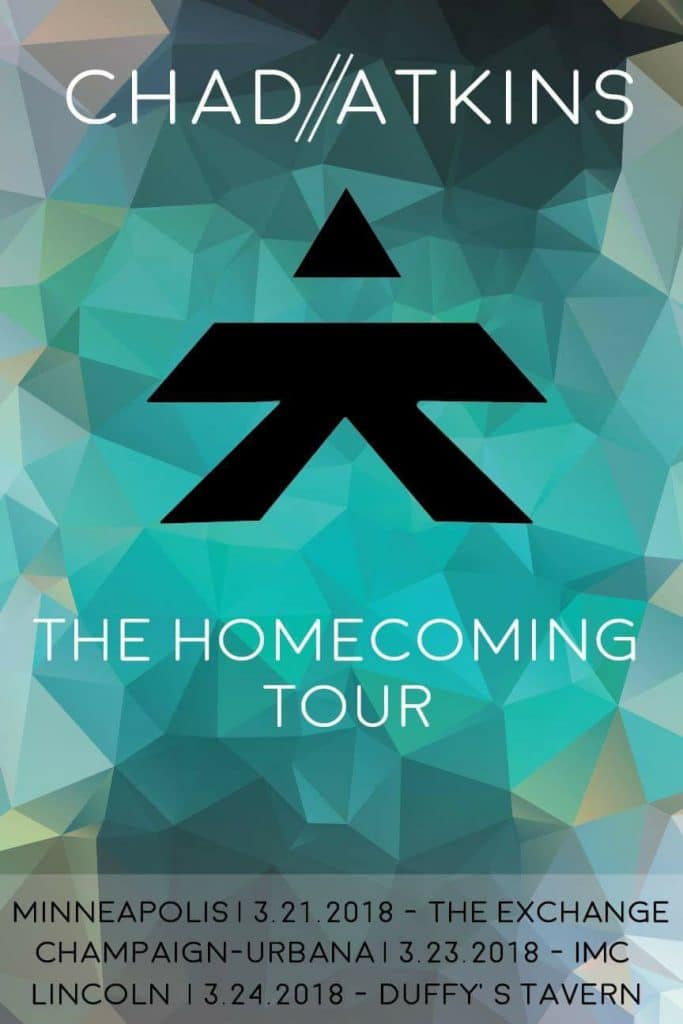 MIM: Will you be performing any new/unheard music on this tour?

Chad: The only new music I’ll be performing are selections from the new EP that I just put out, but there might be some new live edits just for these shows that I might release!

MIM: Is there a date on this tour you are most excited about?

Chad: I’m incredibly excited to play the show in my hometown and be surrounded by so many of my loved ones!

MIM: What’s next for you?

Chad: That itself is a mystery to me. I definitely have some ideas for some new music, and I’m going to continue to perform and do new shows, but as for the big picture, I guess we’ll just have to wait and see!

The Homecoming Tour kicks off a week from today on Wednesday, March 21st at The Exchange in Minneapolis. Information about that show and the rest of the shows on this tour can be found at Atkins’ Facebook page here.

More From: On The Radar