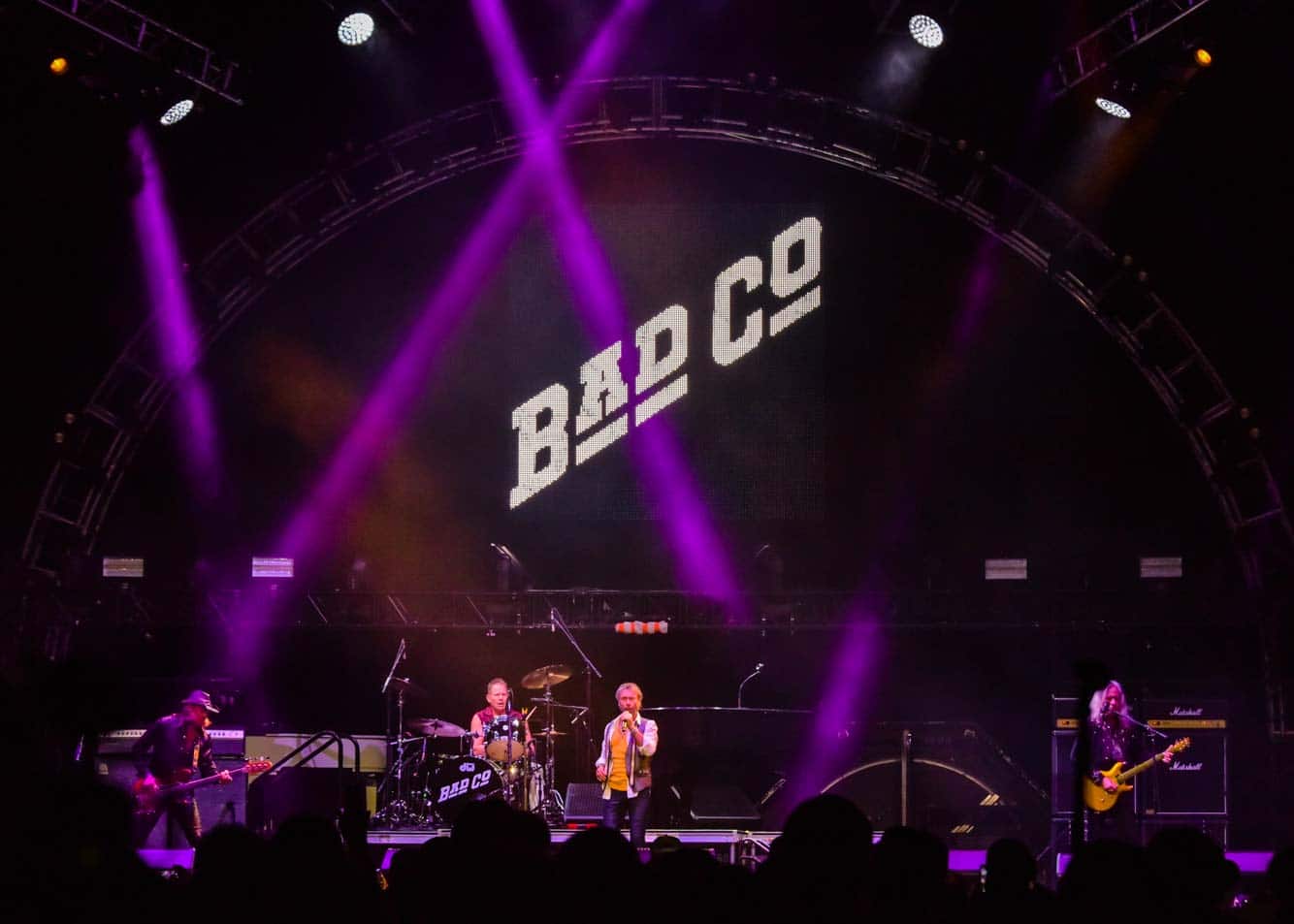 Bad Company hit the stage at 7:35 and started the evening with the anthem, “Can’t Get Enough,” and continued there set by energizing the crowd with hit after hit. Paul Rodgers classic voice howled through eleven chart-topping hits followed up by two encores including their namesake, “Bad Company.” The energy of the of performance spanned highlights from their whole catalog which started in 1973.

In between sets, as the crowd gathered in anticipation, a different vibe was present. Perhaps fueled by alcohol, or merely a drunken ‘mob rules’ mentality some in the crowd seemed to show their lack of education on the music and true meaning behind original singer Ronnie Van Zant’s writing, confusing protest songs to racist definitions.

As a few Confederate flags started to fly, accompanied by a few chants of “Make America Great Again,” it seemed some in the crowd could have replaced their red ball caps for their white hoods. Again, it was only a few. I had a Native American friend leave because some in attendance let him know they thought his skin color did not qualify him as a real American.

I reiterate, these simpletons told Native Americans they were not American enough to be there. Granted, the original and still-remaining guitarist for the band they came see and to rev up an outlet for their hate, Rickey Medlocke, is Lakota Sioux and Cherokee. My suggestion is take off your hat and Make America Educated Again. Oh, and shut up and listen to the music and the lyrics. 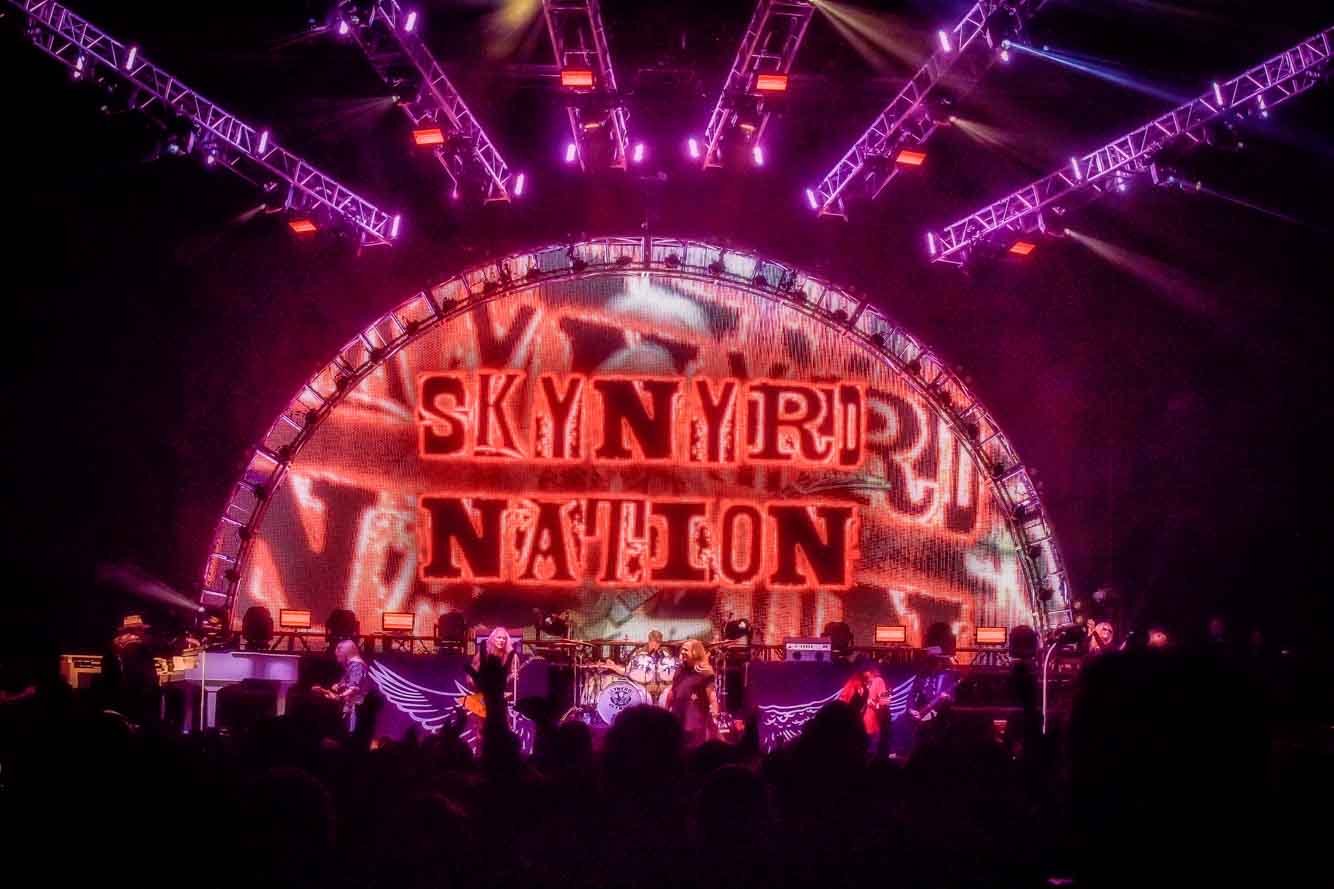 Rock and Roll Hall Of Famers Lynyrd Skynyrd are to music what apple pie is to Americana. Starting their musical journey in 1964, it wasn’t until 1969 when five kids from Jacksonville, Florida changed their name from The Nobel Five to now legendary Lynyrd Skynyrd, thus beginning what would be become an American musical institution. As the main musical force behind a genre known as Southern Rock, they continue to influence generations with their timeless music.

At 9:10 pm, Lynyrd Skynyrd took to the stage, bidding farewell to the thousands of people in attendance who were only there for Bad Company. They kickstarted the night with the classics, “Workin for MCA,” “Skynyrd Nation,” and “What’s Your Name.”

The crowd came alive with an unexpected pro-gun control song, “Saturday Night Special,” followed up with the patriotic “Red, White & Blue (Love It or Leave),’ reminding the crowd that Lynyrd Skynyrd won’t back down from their southern values, even as some of the original values seemed to change with the changing members.

Skynyrd proves to us that in art, as in life, some things are not what they seem. The history of Lynyrd Skynyrd is as amazing as their music. Everyone knows about the 1977 plane crash that killed singer Ronnie Van Zant, Steve Gaines, and backup singer Cassie Gaines.

Some have known about the so-called feud between the liberal-hippy Neil Young and founding member Ronnie Van Zant, but few really know and understand the true meaning behind songs such as “Sweet Home Alabama.”

How it has been used to transcend racial boundaries in the nineteen-seventies, as Skynard’s writing has always equaled their musicianship, though the original singer’s brother, Johhny Van Zant, who stepped up to the mic after Ronnie’s death, through his stage demeanor, seemed to not share the same values on equality.

A Little musical history lesson from The Drive-by Truckers

Even though few in the crowd tried to ruin it for others, seeing Lynyrd Skynyrd on their final live performance is like witnessing the end of a chapter in American history. The self-proclaimed street survivors have laid bricks in the foundation of Americana, Southern Rock, and just plain old Rock and Roll.

The answer to the question first asked in the encore, ” If I leave here tomorrow, would you still remember me?” Yes, you will never be forgotten nor will the original intent behind the music.