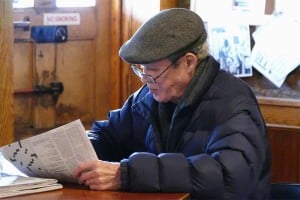 There is no doubt the city of Minneapolis is chock-full of award-winning diners, beautiful architecture and fascinating people. However, some of the best in Minnesota history can be difficult to find if you don’t know where to look. Walk into Palmer’s Bar on Cedar Avenue around 10 a.m. and chances are you will find local legend “Spider” John Koerner sitting at the edge of the bar, sipping on a hot coffee, while filling in the blanks of a newspaper crossword puzzle.

Does the name ring a bell? Koerner is widely known as the once young musical genius who humbly influenced an entire generation of fellow musicians, a man who was part of pioneering the sound of country blues music.

Koerner moved to Minneapolis fresh out of high school at the age of eighteen. Enrolled in the University of Minnesota, he spent a year and a half as an engineering student. During his time at the University, a young man who lived in the same dorm presented him an acoustic guitar he had lying around. Before then, Koerner had not considered the guitar as an interest in any way, although, something about the wooden object appealed to him in that moment. The man graciously loaned Koerner his guitar, along with an Burl Ives folk songbook.

Koerner began to practice continuously on that guitar. If he wasn’t studying in class, you could find him in his dorm room mastering his new instrument. Soon he left the University behind and began focusing all of his energy on his newfound love for music. “I don’t know what got into me,” Koerner said quietly, “I got bit by the bug, I guess.” This seemingly miniscule moment in history began a journey that would shape the entire course of American country blues and folk music.

A couple years went by as Koerner turned from being a student on the guitar to performing on stage. He became submerged in the local music scene as he explored the space of folk traditions around the many pubs of Minneapolis. One of his regular hangouts was a beat coffeehouse called The Ten O’Clock Scholar located in Dinkytown.

During the summer of 1959, another soon to be local legend moved into town. His name was Bob Dylan. He was eighteen when he moved into The Sigma Alpha Mu fraternity house on University Avenue. One of the first things Dylan did in town was walk into a local music shop and trade-in his electric guitar for an acoustic. Dylan then began poking around Dinkytown for a place to strum a few chords and have a pint or two.

“I went up the street and dropped into the Ten O’Clock Scholar. I was looking for players with kindred pursuits. The first guy I met in Minneapolis like me was sitting around in there. It was John Koerner and he also had an acoustic guitar with him. Koerner was tall and thin with a look of perpetual amusement on his face. We hit it off right away.” (Bob Dylan, Chonicles, Volume One, 2004)

Koerner and Dylan each heard one another perform that night. “When he spoke he was soft spoken, but when he sang he became a field holler shouter. Koerner was an exciting singer.” (Bob Dylan, Chronicles Vol 1, 2004)

As Koerner and Dylan became friends, they shared their own personal musical influences with each other. “He had folk records I’ve never heard at his apartment. I listened to them a lot and took to them immediately… We began playing together. I learned a lot of songs off Koerner by singing harmonies with him.” (Bob Dylan, Chronicles Vol 1, 2004)

The two began playing and singing together as a duo, performing many songs from Koerners collection of records, which Dylan took a liking to. “He was interested in Woodie Guthrie,” said Koerner. And he was. Dylan idolized Guthrie, A man who was arguably the most influential American folk musician of the early 20th century.

In January of 1961, after reading that Woody Guthrie was seriously ill in a New York City hospital, Dylan left Minneapolis and moved to New York. Dylan visited Guthrie regularly, as a friendship between the two formed and lasted until the end of Woody’s life in 1967. To make a long story short, Dylan signed a record deal with Columbia Records just months after settling in New York, and the rest is history. “Nobody suspected what was going to happen to him,” Koerner said.

Meanwhile in Minneapolis, Koerner’s interest in blues music led him to form the formative country blues trio Koerner, Ray, and Glover. The self-described “fun-loving trio of misfits” took their handful of songs on the road, touring throughout the United States and Europe. Soon enough, the group began making quite a wave of their own.

“At that time, it was just starting to happen. It was just beginning to boil up.” Koerner explained. It’s difficult to imagine country blues as an uncharted style of music; however, they were embarking on a new and exciting genre.

When I asked John why they called him “Spider” John, he answers, “A lot of these old blues guys had nicknames, like Lightnin’ Hopkins, Tampa Red and Blind Lemon, so, we all had to get our own.” In his earlier years, Koerner had been working at an automotive parts store. Every now and then, he would need to climb the shelves in the back room in order to retrieve a vehicle part for a customer. One of his co-workers regularly saw him do this and came up with the nickname “Spider.” Koerner then began performing under the stage name “Spider” John Koerner.

Over the years, rock stars such as John Lennon, Ray Davies, Bonnie Raitt, and The Doors, were known to give credit to Koerner as a strong influence in their own music. “It has surprised me, people who got to be real well known were aware of what we were doing. John Lennon publicly talked about us, David Bowe listed our album as his top twenty-five favorites, The Rolling Stones used to listen to our stuff…we were noticed.” As time went on, Koerner continued to receive international recognition by many artists such as Prince, Soul Asylum, Beck and many more.

Koerner recalls a couple of situations where a few well-known artists had used his material on a track they released. “The Doors admitted to taking a guitar lick of mine and using it in one of their songs, which is fine. It’s what you’re supposed to do, in a way.”

Ray Davies of The Kinks released one of Koerner’s songs he had written, changed the title and claimed co-authorship. Koerner’s record label Red House Records contacted The Kinks and their label happily removed Davies credit from the song. Nowadays in the music industry, if an artist attempted to get away with using someone else’s material without paying the original author royalties, that artist would expect to face a serious legal battle – likely involving a large amount of money.

In 1972, other interests began to take hold of Koerner. He moved to Copenhagen, Denmark at age 34 and hung up his guitar forever, or so he thought. One year later, after he had been inspired by some old Alan Lomax records that were lying around, he picked up the guitar once again, but this time with yet another new sound in mind. “I didn’t want to play country blues anymore. I took some of the style from Country Blues and began laying it over the folk music I began writing.”

“When you get into looking at this stuff and making sense out of it, it can be scary,” he continued, “then eventually it changes from being scary to somewhat comforting.”

Koerner didn’t stop his handy man skills there. “I woke up one morning, and I thought I should have a boat.” He then walked down to the town bookstore and found a book on how to construct, well, a boat! The book was filled with instructions on how to build an authentic American Jon boat, Ozark style. Koerner followed the “simple” instructions, until he was finished with his first ever handmade wooden boat. Later on, Koerner also built a sixteen-foot sharpie sail boat, which he designed himself, along with a few more Jon boats and a sailing skiff for his wife.

In an instance where one might consider obtaining a boat, the average person would purchase one at a marine dealer. Koerner snickered, “I didn’t have enough money to buy one, but I could afford the lumber.” Self-effacing Koerner goes on to say, “It’s easy. If you’re a little handy, it’s not hard.”

As Bob Dylan states in his biography, “Koerner was not just a crony in the Minneapolis folk music scene of the late 1950s and early 1960s. He was a major inspiration,” (Chronicles Vol 1, 2004) It is interesting to imagine what musical path Dylan may have taken if it wasn’t for running into Koerner on one memorable night in Dinkytown. In their own respected ways, the two men will always remain great legends of Minnesota.

His passion for astronomy continues to grow, as does his passion for music. Koerner still occasionally plays around town. He has toured all over The US and Europe, yet after all these years he proudly calls Minnesota his home; A reminder during these cold winter months that Minnesota may not be the best place to vacation, but a wonderful place to call home.