Cher thrilled the Xcel Energy Center during another sold-out performance! No need for Cher to turn back time, although she did anyway, taking the audience on a journey through the course of her career.

The opening act, Nile Rodgers and Chic, sounded like a cover band that happened to have a couple of hits in the disco era. Maybe it was because Nile Rodgers kept touting all the hit songs he wrote for other artists. These songs include tracks for megastars like Diana Ross and David Bowie.

The soon to be 73-year-old Cher absolutely proved that she still is the funny, charismatic and sarcastic lady everyone has come to love, not only mocking herself, but throwing in jibes at Jack Nicholson too.

Her show basically was broken down into sets, or acts, if you will. 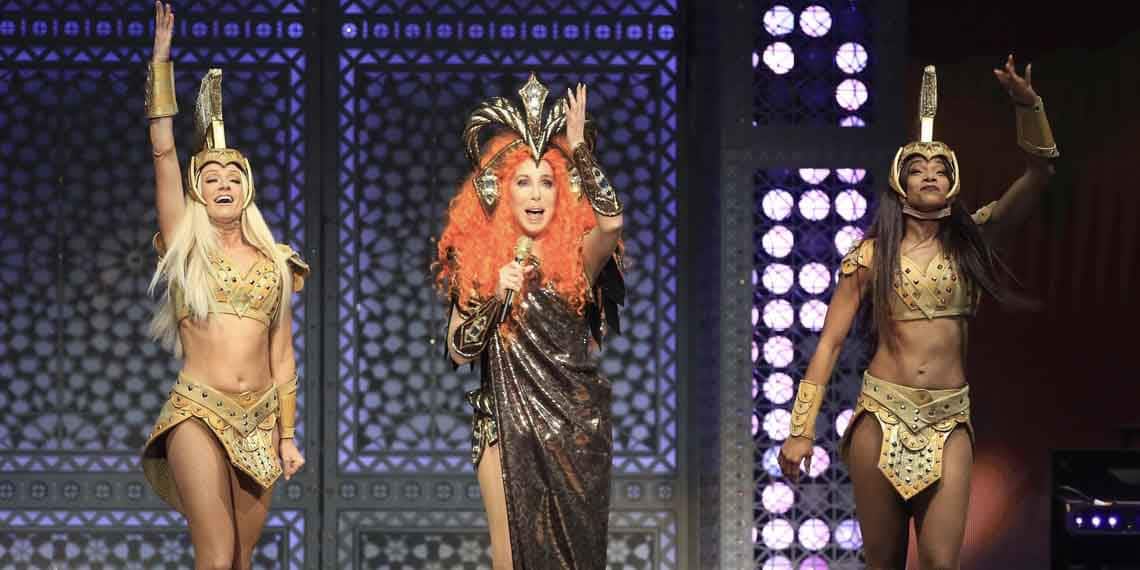 The opening act consisted of Cher in a gladiator style theme that encouraged the ladies to be strong. It is, after all, a woman’s world.

Act 2 consisted of Cher and her many dancers coming out with her 1960’s era straight hair and clothing. Then a video started up, featuring a cute part where Cher was singing to Sonny up on the screen. Unfortunately, Sonny’s part came across like he was singing through a tin can.

Act 3 was Burlesque and Disco Era themed. Cher came out singing 3 songs from her album Dancing Queen. It wasn’t bad, but where was the title song? Instead, we got to hear “Waterloo” and “SOS.” When you think of ABBA, the top songs that come to mind are “Dancing Queen,” “Take A Chance On Me,” and, the one song she did sing, “Fernando.”

Act 4 was a little more muddled. It featured yet another video intro that included Elvis Presley, and Cher (Chelvis) imitating Elvis. After the video, Cher came out and sang a wonderful cover of Marc Cohn’s “Walking In Memphis” and “The Shoop Shoop Song (It’s In His Kiss)”

Act 5 started with a guitar solo. I’ll say that again… A guitar solo. It felt forced, and it was out of place. I thought I was at an arena rock concert for a moment, not a campy Cher concert.

Cher finished the night with her 2 biggest hits, starting out with everyone’s favorite sing-a-long “If I Could Turn Back Time” and concluding with a lip-synched encore of “Believe”.

The dancing was great throughout the whole night! The two dancers up on the trapeze were amazing and completely mesmerizing. The only problem I had with the dancing was they obscured the view of Cher on several occasions, making it feel like Cher wasn’t on stage at times, but hiding in the background. It already felt like she was off stage quite a bit during the 5 or 6 videos and numerous costume changes.