The last few years have not been kind to NASCAR. Attendance has been plummeting, the brand is foundering, and they are in desperate need of a rejuvenating event to get a younger generation interested in stock car racing again. Their solution to this problem? A two-day festival leading up to the Brickyard 400 in Indianapolis this month, headlined by The Chainsmokers and Major Lazer.

To most people reading this, that last sentence might sound like a strange combination, and trust me, it is. While the idea of putting on a two-day festival leading up to one of the biggest races of the season is a step in the right direction, we are not completely sold on just exactly who they are recruiting to perform at this festival.

While it is typically not in good taste to generalize an entire group of people who enjoy a certain sport, I feel it is safe to say that a typical NASCAR fan who watches the Sunday afternoon races religiously has no clue who The Chainsmokers are, and that’s not a great way to cater to your fan base.

“400 Fest will help introduce a new generation of fans to Brickyard 400 weekend,” IMS President J. Douglas Boles said. “This impressive array of superstars will add even more appeal to what is already one of the most exciting weekends of the year at IMS.” 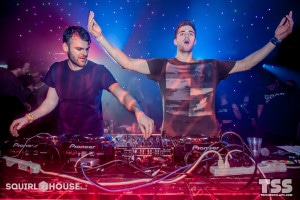 Now, I did say earlier that they needed some sort of rejuvenating event to get a younger generation interested in the brand again, but is The Chainsmokers the group to do that? Wouldn’t it be a safer bet to approach a band such as Florida Georgia Line, or a country music superstar like Luke Bryan, or Jason Aldean? Are the typical listeners of Top 40/EDM hit the kind of people who will be so enthralled by a concert they will suddenly become fans of NASCAR? At that point it is no longer generalizing, it is just simply playing the odds.

Furthermore, tickets to 400 Fest, which cost $100 for a two-day pass, do not include admission to the Brickyard 400 race on Sunday, essentially making this an entirely separate for the main focus of the weekend.

Clearly, NASCAR is grasping at straws here, and the future doesn’t look good for the company, who recently sold their naming rights to the popular energy drink company, Monster. These desperate moves to help capture a younger fan base are fairly transparent and are not working. The future looks bleak for NASCAR, and unless they start to put together events that cater to the correct segments of fans, the brand could soon become a thing of the past.