With a name like niiice., one could think that the local emo/punk band pulled their name from the classic Minnesotan stereotype.

In actuality, Roddie Gadeberg, the vocals and rhythm guitar of the quartet, drove past the billboard that inspired the name in North Dakota. And for a self-described nice, weird and dorky band, the stylized name fit.

Gadeberg was on his way to McNally Smith College of Music for the fall of 2016, where he met drummer Sage Livergood and lead guitarist Allegra Hernandez. They started jamming and started the band. Eight months later, bassist Abe Anderson was added to the mix, and the punk band Minneapolis knows today lined up nicely.

(And yes, for the record, the official spelling includes a lowercase “n,” three i’s and a period.)

The band played its first show in St. Paul’s Lowertown neighborhood for Halloween in 2016, and Hernandez said their almost instant involvement with live shows helped the band develop their niche immensely.

“For niiice. I think what helped us grow the most was the immersion we had in the scene,” they said. “We didn’t really stay within the walls of our school.”

Eventually, they weren’t able to stay in the walls of the school at all; McNally Smith suddenly closed after the 2017 fall semester. Despite the huge life shift for three of the four members, the recording process for their first full-length album trudged on.

Try to Stay Positive was released four months later on April 14. The 10-track collection – which features a hand drawn thumbs-up cutout on a bright yellow cover – explores the multitude of emotions that occur during adulthood and plan changes. The tracks almost bring the audience right into the small, hot dorm room where Gadeberg wrote most of the lyrics. 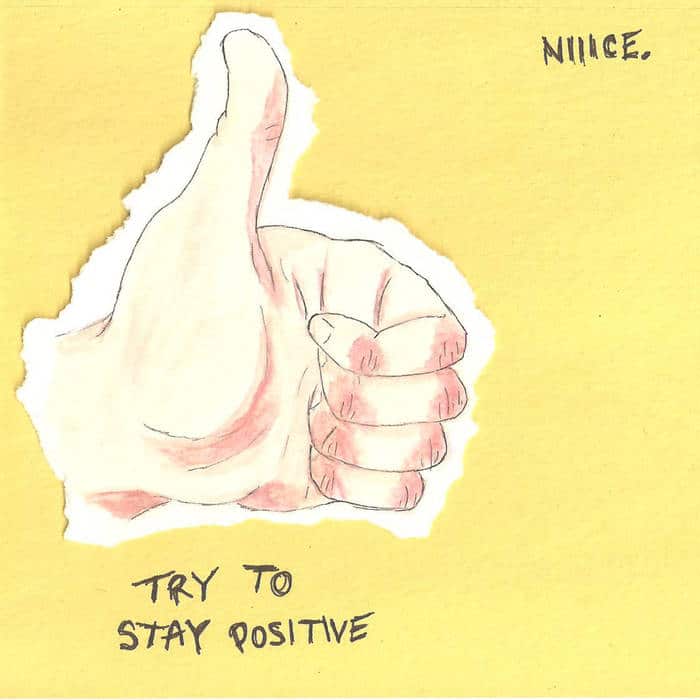 “It’s just like a reaction to growing up,” he said. “A lot of those songs were written when we were all within our first year of being adults, and adulthood made me really sad.” The album is a reaction to more than just McNally Smith closing, with lyrics ranging from themes of loneliness and relationships to stress and work.

“With the album name itself, we’ve really gone through a lot of life changes,” drummer Livergood said. “Try to stay positive, that’s really what the [album’s] tagline would be. It’s been what we’ve been trying to do.”

Opening the album with anything but a soft entrance, “RVR WTR” immediately dives into bright pop-punk guitar licks and innocent, sad lyrics. “Just another sad white boy moaning about all his problems,” Gadeberg sings, but it sure works for him and the band.

You’re then brought into his simple daily life in “Star Wars,” from hating his job, paying his bills and seeing friends at a show. It’s lyrics and music like this that help contribute to their accessibility – the listener can easily feel what they are feeling, angst and all.

“Home Alone 2” is the first slow track of Try to Stay Positive. With its driving and heavy chords, it almost gives faint vibes of a Coldplay-ballad-turned-punk. “Remember when we met that night/stayed up late till four or five/we talked a lot about our lives/and when I left you kissed me twice,” Gadeberg sings in one of his strongest vocal performances in the track listing. The bright punk sound seems to belong in either a film or blaring from a car driving with its windows down this summer.

Another standout track, “Idnu,” closes both the album and many live shows. The combination of the building guitar riffs – which on first listen was reminiscent of Pearl Jam’s “Black” – and some of the angriest lyrics of the work make it the perfect statement to end the album. The dissonance of vibe and feeling is perfect for the album title itself; throughout all of the emotions the band is feeling, they really are trying to stay positive.

When the foursome realized unsigned bands could tour too, they ran with it. Hernandez said they’ve taken advantage of the local DIY music scene playing shows at local venues like The Drop Off and Paperhouse, as well as Grandpa’s House in Moorhead.

“I think Minneapolis has a very top-notch DIY scene as compared to a lot of other cities,” they said. “A lot of that is because, for the most part, I feel like people [here] actually want to listen to new music and new bands. In bigger cities, you have to fight to be heard. This is such a great place to live, work and grow in a music career.”

While college-aged adolescents tend to fill their sold-out and slightly sweaty crowds, especially being located so close to the University of Minnesota campus, the band’s listeners are scattered throughout the local Midwest area that they play. (The band said they even have a fan in Dublin, according to Spotify.)

“It’s really a great place to play music, as far as with bands to play with and spaces to play,” Gadeberg agreed. “It’s also in a great spot geographically. It’s easily accessible to most of the Midwest.”

And the band has been taking advantage of that prime location on tour.

“It’s really cool to go to other places and see that people dig your music,” he continued. “We played in Fargo and Billings Montana, and people knew the words. It’s always been a dream of mine to rock gigs, and it’s really cool that I get to do that with my best friends – it’s tight.”