Within the last four years, Post Malone’s laid back rap songs have spread like wildfire across the world.

His album Stoney, released in December of 2016, was certified platinum in less than six months, and the leading single, “Congratulations,” was on Billboards Hot 100 for 31 straight weeks. His 2018 album, Beerbongs & Bentleys went on to do even better.

John Mayer put out a cheeky public opinion of Post Malone’s music on twitter, which caught the attention of many, including the rapper himself. Malone’s response is hilarious. 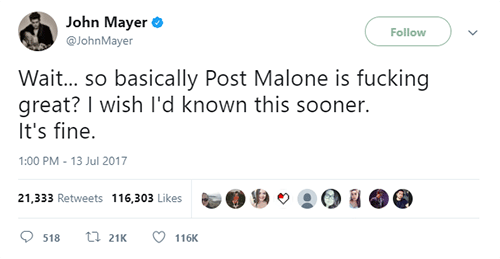 Aside from laying down a sick flow, Post Malone is a surprisingly talented singer and guitar player! In fact, in 2010 he tried out to be a guitarist for the Metalcore band Crown The Empire.

Word on the street is he was rejected after his guitar string broke during the audition.

It turns out Post Malone doesn’t need a band in order to reach success, which has been proven by his climbing to the top of the ranks on his own.

Check out this video of Post Malone covering a song by Minnesota’s own Bob Dylan.

Post Malone released a teaser for “Circles” a track that will be on his highly anticipated 2019 record planned to drop in September. Funny enough, the music sounds like something Mayer would produce.

Should Post Malone make more acoustic music? Should he and John Mayer collaborate together? Let us know your thoughts in the comments!