“I actually still have Minnesota plates on my car and a Minnesota license in my wallet,” claims Brandon Buttner.

A resident of Los Angeles for close to 8 years, engineer and vocal producer Brandon Buttner still has some heavy Minnesota ties. When I called his Midwest area-coded phone, we spoke about his strong ties to his home state, his McNally Smith start, and the huge decision to move to California for a career.

To get a sense of how far his journey has gone, last Friday Marshmello and Halsey released a song that Brandon produced the vocals on. A polished pop hit, the song is a glimpse into the skills and many roles behind a top single.

Behind every artist is a team of professionals that support and help define their vision. It’s not glamorous, it’s definitely not normal, but it is crucial to the music we listen to. This month we’ll take an inside look into one persons’ journey behind the glass. We’ll learn more about the difference between Minneapolis and LA’s music scene, along with advice and expectations on becoming a successful music producer and engineer.

Brandon Buttner had a really classic start to music. He started playing in bands in Middle School and eventually knew they needed to record some material. It started with experimenting with loop pedals by running a microphone through the pedal, adding drum sounds, and building his ideas. One of the bands ended up recording with a full ProTools rig, a rack of gear, and all sorts of equipment they hauled into a house for a weekend. (ProTools is recording software that has since become the industry standard.)

That lead him to a rehearsal space in St. Paul that was converted into a makeshift recording studio. Seeing behind the scenes on how music gets recorded and made intrigued him more than the idea of playing. He still relates back to that initial experience as using the studio as another instrument and learning how to see something through from the creation to the final release.

The lesson being to get involved in the process as early as possible. For him it means writing with the artists, producing what they have already crafted, and possibly mixing the finished music. 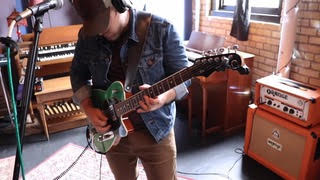 The recording industry has been mainly built from apprentice programs, unpaid internships, and bypassing a formal education. The choice to go to college for music production is personal and not always necessary. Although Brandon attended McNally Smith in St. Paul, he always shares that his advice is based on long-term goals. College for these skills can be important in getting yourself out there and starting to work with artists. But as Brandon confirms, the overall path is still a more traditional route.

“The best way to get into engineering (in LA) is to intern at a studio and work your way up from the bottom. It’s still the classic model of how things used to be done,” Brandon states.

Right now there is a larger pool of young adults wanting to get into the profession. In order to get into some large studios, you have to do it via internships through a school. They won’t even accept a resume if you’re not currently a student. This catch-22 is unique.

You don’t necessarily need to attend a school because most of what you’re going to be learning is on the job, building relationships, and just doing the same thing over and over again to get the hours in. Schools can’t really teach those skills, but it maybe able to get you in the door.

Brandon’s own experience at NcNally lead him to understand the importance of troubleshooting. The expectations at any studio is being able to fix issues and come up with a solution quickly and calmly. Being able to make those issues unknown to the client is key. So building the technical experience at a college can be extremely valuable to this.

From Minneapolis to Nashville to LA

Brandon was interning at Fuzzy Slippers Studios in St. Paul when it closed. He took that opportunity to go to Nashville and intern for 4 months and get a taste for the scene at a couple different studios. There was a moment where he considered dropping out of McNally and staying down in Nashville, but he felt it was important to wrap up his education and ended up coming back to Minnesota.

As for LA, the whole concept of moving there started as a joke. No one at his school really left Minnesota once they graduated, so he started telling himself that he was going to do LA. Like a skipping record, he repeated it to so many other people that he felt he actually had to follow through with moving. At the time he feared that Minnesota had a glass ceiling for opportunities. Looking back, there are certainly opportunities that exist in LA on a day to day basis that people would never get in their entire lives back in Minnesota.

“I really just wanted to work at a very high level with the biggest names, at the biggest studios that I could. I just didn’t want anything holding me back,” Brandon shares.

Here’s where the story gets interesting.

Most people, when they move away, put a close to their ties they left behind. A new life, a new environment, all while moving on from the old path. Brandon credits a Facebook page called MSP Studio Nerds that he’s a member of. It’s kept him connected to activities and the Minnesota scene. Brandon travels back to Minnesota frequently and will randomly pick a person to meet with when he’s back. They chat over a drink and talk about the music scene and what they’re up to. It allows him to see who’s active in our scene and build immediate relationships.

This continual effort to stay entwined in both music scenes has strengthened Brandon’s bond to our community. He’s worked out of Hideaway Studio, landed at the Terrarium for sessions, and continues to produce Minnesota artists like SOLANA.

“It’s gotten to the point where every time I am sitting down and talking to someone, it’s like, ‘Oh yeah, you know this person at this studio’ and I’m like, I met up with them last time I was here or I’m having lunch with them tomorrow.”

Next week we dive into the LA studio scene and follow Brandon’s start as a runner, gathering alcohol and weed for artists. We learn the most important skill at a studio and get a glimpse into the glamour behind the glass even more.