Waiting for Thomas Rhett to hit the stage didn’t feel like a country concert! Welcome to today’s new country. The night featured a DJ who played between sets with a setlist that was anything but “country.”

Thomas Rhett literally jumped into the show, bringing his crossover country, pop, and R&B hits to the Xcel Energy Center for a hot 95-minute-set that featured several of his 13 number one hits. Among them were the life spanning ballads “Sixteen” and “That Old Truck.”

29-year-old Rhett had the mostly-female audience’s attention from the beginning, starting out with “Look What God Gave Her” from his current album Center Point Road, and the poppy hit “Crash And Burn.” 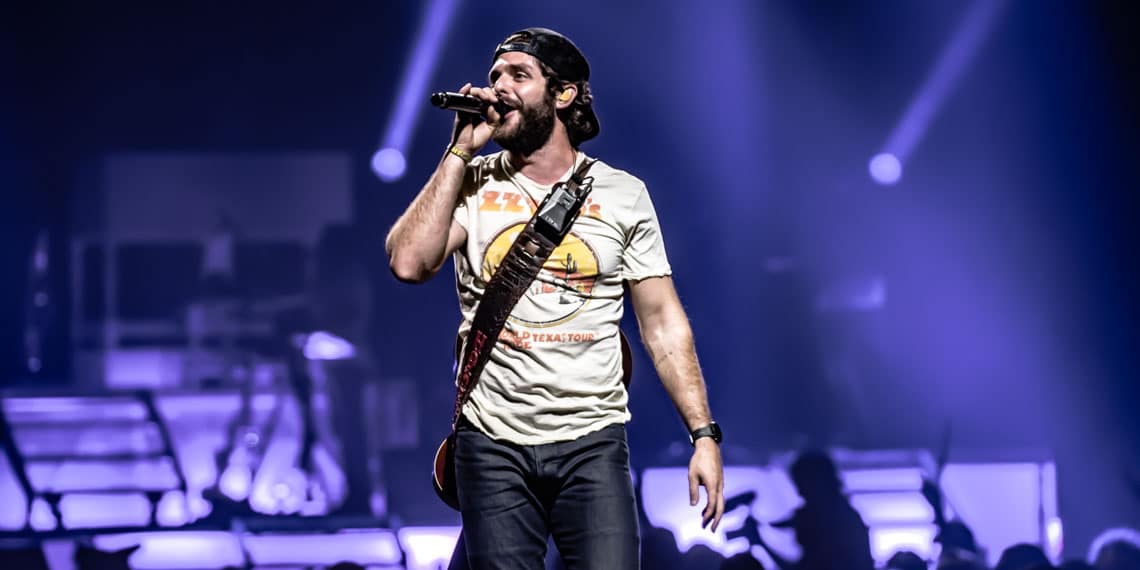 I was impressed that as Rhett made his way down the catwalk-style stage, it wasn’t just a couple of quick passes. He focused on the end of the catwalk, where he played several songs including “Things Dads Do,” which was co-written with papa Akins the night before.

Thomas also brought back the 3 warm-up acts, The Minnesota Wild jersey-wearing Dustin Lynch, Russell Dickerson, and his dad Rhett Akins, who came sliding in between the trio with a cooler full of beer and handed out refreshments during the song “Beer Can’t Fix.”

The pop side of the show hit a crescendo when Rhett came out swinging with the rap inspired “Vacation.” He then came back with the hits “Marry Me”, “Unforgettable” and “T-Shirt.”

Starting out the night with a short 20-minute set was Thomas’s dad, Rhett Akins. Although Rhett only played a short set, he made it easy to see where Thomas got his songwriting skills. He played “That Ain’t My Truck” and “Don’t Get Me Started,” two classic country songs with which he had hits back in the ’90s. Rhett also showed off the modern side of his songwriting skills, showcasing the song he wrote for Jon Pardi, “Dirt On My Boots,” and two he wrote for Blake Shelton, “Kiss My Country Ass” and “Boys ‘Round Here.”

Russel Dickerson, who, like Thomas Rhett, has that R&B, pop, country style, came up next with his catchy upbeat songs “Billions,” “Float,” “Blue Tacoma,” and the ballad “Yours,” which had the ladies up against the catwalk crushin’ for Russell. The last song for Dickerson was both a hit and a miss as he mashed his dance song “MGNO” and the Whitney Houston classic “I Wanna Dance With Somebody.” “MGNO” was pretty good! The cover of Whitney Houston made me not want to dance with anyone. Anything Whitney is hard to pull off, and this just didn’t work.

Audience favorite Dustin Lynch was the last of the opening acts! The ladies’ favorite in his usual Cowboy Hat and a huge smile, he blended his own hits with a few covers including Tim McGraw’s “Something Like That” and a great version of Alan Jackson’s “Chattahoochee.”

The show was a fun and unique night of pop and country. An entertaining evening that left the crowd dancing on their way out the door.