No matter the day of the week, there is always some solid live music to catch in our wonderful, art-filled city of Minneapolis.

The 900 block of Cedar Avenue in Minneapolis was no exception last night, with Back To The City hosting a showcase of three bands at Whiskey Junction.

Back to the city

MPLS Music Conversation is a series of audio and video interviews by Simon Calder. He has also been booking shows for a showcase series by the same name.

This particular show was originally scheduled to be held at Mortimer’s on Lyndale and Franklin. Due to a scheduling mix-up, the venue apparently double-booked the space for that night. After some disappointment and scrambling to find another venue, members of Druzy Rose reached out to a contact they had at Whiskey Junction. Luckily, the venue was able to host the event with just a few days heads up. The bill went from four bands to three in the process, but the remaining artists were very happy to still be able to perform.

Whiskey Junction has the feel of a small-town biker bar. It attracts patrons from all walks of life and music lovers of all genres. The vibe was chill on this Thursday night in February. The place was quiet when the night began, but slowly started to fill up as more people trickled in from the show that was just finishing up next door at The Cabooze.

Three-piece alternative punk band Partition started out the night. With dramatic makeup and high energy, they were a queer millennial reincarnation of 90’s grunge punk. Their hardcore instrumentals and ‘ we don’t owe anyone shit’ attitude is typical to a group you would catch at a sweaty basement show.

Lead singer Taylor wrote most of the songs during their struggle with drug addiction at 18. You can feel the darkness and desperation in the songwriting. Now two years sober, you can see that they have put hours of work into making their set tight. The mark of an effective punk band is looking sloppy but not sounding sloppy.

They had a feel almost akin the the band Bully. The hardcore instrumentals mixed with the higher-pitched, almost adolescent-sounding vocals enhance the haunting reality of the darkness within youth. For a last dramatic flair, Taylor crumbled to the ground after the final song.

You can catch Partition playing with Beach Slang at the 7th St Entry on April 9th.

Second on the lineup was Red Eye Ruby, a female-heavy folk band with sounds stemming from Americana, blues, jazz and hints of ragtime.

Their opening song was a cover of “Summertime” featuring sultry cello and a swing beat. The band recently expanded to a five-piece, adding in drums and bass to the existing group.

Lead singer and guitar player Liz Collin has a sweet and high-pitched voice. Her vocals mix a soft and nasally folk tone with an old-school jazz lounge vibe. Many songs are classic pub songs about whiskey, and one of the most notable lyrics is repeated as the chorus,

“Ain’t nobody gonna love you like the devil do”

Paired with dual vocals and high harmonies, the nostalgic vibes render a feeling of haunted Americana. Whether interpreted as a saloon cabaret or a psychedelic circus, their influences span across centuries of American music.

Finishing off the night was Druzy Rose, a seven-piece alternative pop group.

The band is beautifully described in their biography: “Although driven primarily by dreamy lyrics about the life and times of a part-time party girl and full-time cynic, the band also features high energy performances on alto and tenor saxophone, piano, synth, guitar, bass, production, and drums. Seamlessly combining the genres of bedroom/ dream pop and piano driven indie, Druzy Rose creates music that speaks deeply to the troubled collective human consciousness in a manner that is both charmingly whimsical and brutally raw.”

The group started off their set with a solo from lead singer/keyboardist Megan Gunderman. She began the night with a dreamy rendition of their song “Float,” which featured serene synth arpeggios. The other band members began to enter the stage one by one during the solo, each inciting applause as they joined in and began playing.

Megan’s voice is somehow both dreamy and gritty. She is equal parts serene and sultry, seamlessly switching from a deep blues belt to a grungy rasp. Her whimsical songwriting is lyrically driven and technically surprising, with jazz-like time signature changes and key changes that almost go unnoticed because of how well her vocal melodies carry the songs.

“Let’s go to Benihana’s and get totally fucking trashed,”

it’s hard not to relate to her brutally honest story-telling. Her tales of a young woman learning to love herself through the tough years of early adulthood are endearing.

Their genre is hard to pinpoint. Gritty-yet-whimsical, they utilize classic instrumentation such as funky saxophone melodies and stand-up bass (played with a bow for a melancholy feel), as well as modern electronic beats from producer Ghosty.

The saxophone playing by Dante Leyva can’t go unmentioned. He brings such energy to the stage, executing tight solos as well as subdued backup harmonies. He plays the saxophone as if it were a lead singer, carrying melodies throughout songs and riffing on them for variation. Yet he is careful not to outshine the lead vocals.

A stand-out song of the night was one of their more well-known tracks, “Back Of House Love Affair.” It featured the band at its tightest, as each member shared the melody succinctly and successfully.

For the last third of the show, producer Ghosty came on stage to finish off the night with a high-energy feel.

The beats they added gave some club vibes and got the crowd moving. However, it was apparent that they should have done further sound-checking prior to the show in regards to this addition. The bass notes from Ghosty unfortunately drowned out the rest of the band, making it difficult to hear the lyrics which are too good to be lost in the drone. In an otherwise solid sound situation, this was a slight disappointment.

Nevertheless, they didn’t fail to pump up the energy and get the crowd dancing. Ghosty acted as a very effective hype-person, getting onto the floor with the crowd and encouraging them to “get low.”

For one of the final songs, Megan tried something new by sitting glamorously on the edge of the stage for her melancholic ballad “The Last Festival Of The Year.”  Megan used the song to come out from behind her keyboard and get more intimate with the audience, a welcome addition from someone with her look and stage presence. It prompted images of a jazz singer sprawled across a grand piano.

Thursday’s show followed a recent video interview with Druzy Rose, which can be found on the Back To The City Facebook page. You can catch Druzy Rose in Minneapolis at Bryant Lake Bowl March 13th, Part Wolf MPLS on March 28th for the Mae Simpson EP Release After Party, and at the Galactic Get Down music festival in June 2020. 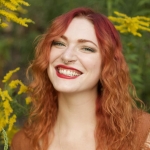 Joslyn is a writer, musician, and digital marketing manager currently residing in Minneapolis.

Joslyn is a writer, musician, and digital marketing manager currently residing in Minneapolis.