It’s 5:20 am, the sky has the blue hue that appears right before sunrise. I am up far too early, I usually see this sight when I’m up all night, but never getting out of bed. This is something I never do, but today was a special one. We were meeting the band from my angsty teenage years, the legends that with the music video on that suburban roof. We were meeting Simple Plan.

However, this was not my typical assignment, we were not heading out to a concert and I wasn’t doing photography of any sort. We were meeting the band on the set of a movie in Owatonna, Minnesota about an hour south of the cities. And the assignment was simple, figure out why the band was reuniting for a day in a small Minnesotan town of just under 30,000 people.

So, our team for the day packed in SUV and we arrived on the set of Summertime Dropouts an upcoming pop-punk musical film that takes place during the final years of Warped Tour (R.I.P).

It features a story about best friends starting their own pop-punk band with the dream of playing in Warped Tour. However, it’s no easy journey. Simple Plan is directly involved in the movie, but I won’t spoil any part of the movie for you.

Eventually, Katie and I are whisked back behind the set into a hockey arena (How Minnesotan) and up the stairs. There, Simple Plan is hanging out, casual as can be. We say our greetings, I set up and we interview them.

After that, like most artist interviews, I thought it was all over, but we actually ended up hanging with the band for the remainder of the hour. We talked sports, their kids, how Minnesota is basically Canada, and festival culture around the country.

These were the most down celebrities I’ve ever met, willing to talk, relatable, and just plain nice. According to everyone in my Instagram DMs, the answer was obvious: “Well duh, they’re Canadian.”

I’ve heard of celebrity meet-and-greets that have gone infinitely poorer than what we experienced. This was just great, I felt like I actually got to know the guys. Especially Jeff Stinco, the guitar player for the band. We talked multiple times throughout the day and on set. So, down to earth. 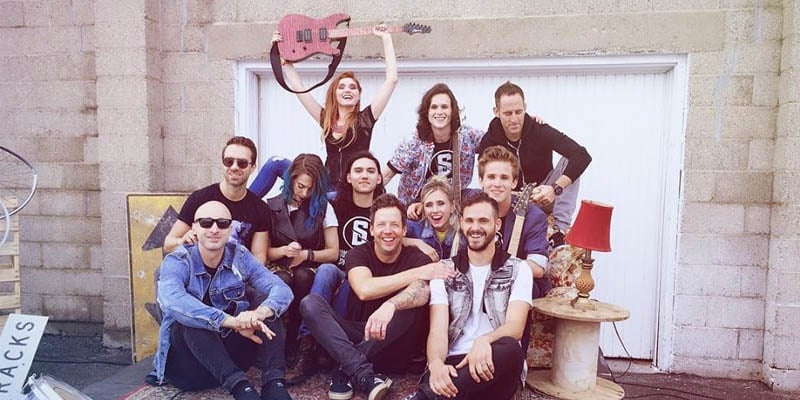 After the interview was over, we walked out of the arena to be greeted by a production assistant. “Are you here to be extras?” she asked. “If you want us to be….?” I responded. And before you know it, we were directed to a desk behind the main set, signed out paperwork and boom, I guess I’m in a movie now, surprise.

You’ll get to see my best acting, in the background and probably blurred out, but damn it, I’m in a movie, and in it multiple times I might add.

Before you know it, the end of the day rolled around and it was time to head back. We said our goodbyes to the band and staff and went on our merry way. I left probably one of the most unique experiences of my life.

People say never meet your heroes, but what if they’re Canadian? They’ll probably leave you with a better impression than you had before. You’ll learn that they’re not that different from you and me.

Summertime Dropouts hits screens in the fall of next year.

Katie: Hey guys it’s Katie here with Music in Minnesota, and today we are here with Simple Plan.

Katie: So we’re here on the set of Summer Dropouts.

Katie: What can you tell us about that? What are we doing?

Pierre Bouvier: We’re here for a movie, it’s kind of a cool story about a band; that I feel when we heard about the script it kinda reminded us a lot about our situation, our band and what we’ve been through. So it was kind of a good match for us. But we’re basically following this little group called Summertime Dropouts and they’re tryna play a warped tour. And we’re playing warped tour, and we’re kinda like the heroes.

Katie: You are playing yourselves.

Pierre Bouvier: So, they said you could be in the movie and be the hero of the movie, and be like “Okay, cool”.

Jeff Stinco: We were that band too. We played the parking lots of many tours in the past, you know.

Jeff Stinco: So it reminded of past stories that were actually really nice, really cool.

Pierre Bouvier: Yup, we did that. Wrapped up a couple of weeks ago, and that was awesome. Seven weeks on the road.

Sébastien Lefebvre: So many good times.

Katie: I went to three of them, in a row.

Pierre Bouvier: You did?

Katie: I hit up Chicago.

Pierre Bouvier: I was there too.

Pierre Bouvier: We were there too.

Katie: No way! That’s crazy. I’m surprised I didn’t run into you.

Katie: I did, I did. And I saw that you guys did some collaboration with other bands as well.

Pierre Bouvier: It was awesome, we have a song called I’m Just a Kid that’s kinda been around for a long time. And we asked if you band guys out there, if you wanted to sing it with us for the final chorus. And I grabbed the drums and Chuck jumps in the crowd.

Pierre Bouvier: So while we needed an extra singer, we asked Ryan from…

Pierre Bouvier: Young Blood, we had, who else did we have?

Sébastien Lefebvre: Travis from We The Kings.

Sébastien Lefebvre: Jaret from Bowling for Soup as well.

Chuck Comeau: So we had an all-star, pretty much.

Chuck Comeau: It was rad.

Katie: So it was something you initiated, they didn’t just crash your set, you just had to roll with it.

Pierre Bouvier: We had to pay some people off. “No, I don’t wanna do it”, “How about five dollars?”.

Katie: Alright cash. So we do have a couple of fan questions, …

Katie:  that were submitted. So one, we wanna know whose idea it was for the rooftop music video that you had for “Perfect”. The rainy rooftop.

Katie: It was yours.

Katie: How did that come about?

Chuck Comeau: You know, I don’t know, I just thought it would be a really cool visual.

Pierre Bouvier: Just sitting on a rooftop one day, and it was raining.

Jeff Stinco: I told you that I had heavy vertigo.

Jeff Stinco: That’s where the idea come about.

Chuck Comeau: I just wanted to bum Jeff out and have him stand on a roof with rain coming out. But I just thought it would be a cool visual. It was a cool metaphor for the song to be over that house where all these lives are kind of happening, and I thought it would look iconic. I think it stood the test of time, people are still talking about it…

Chuck Comeau: It worked out.

Pierre Bouvier: It wasn’t a real rooftop though.

Pierre Bouvier: We built a fake rooftop in the middle of the street. Because the real rooftop was a little too high.

Katie: I can understand your concerns.

Pierre Bouvier: I wasn’t concerned about it, but back then the music industry had a lot of money and they were like, “Let’s build a fake roof”. Now it would be like, “No, we’re okay with it, just get up there, you’ll be fine”.

Katie: The final question, somebody wanted to know, did you make your dads proud or are you still not perfect?

Pierre Bouvier: can we be both? We made them proud and we’re still not perfect.

Katie:  It’s up for discussion, I guess.

Pierre Bouvier: Exactly. It’s all about the happy ending.

Katie: Well awesome. Thanks guys for hanging out.

Pierre Bouvier: Thank you very much.

Katie: Have fun this side. We look forward to seeing the final product.

Katie: You heard it here.