Based out of Minneapolis, Bottle Kids is a hip-hop duo made up of Ty Davis and APLifted. The group was founded in 2016 and the two have been dominating the scene since, leaving their mark all over the Twin Cities while opening for headlining acts such as Gucci Mane, Pouya, G-Eazy, Riff Raff, as well as countless more.

Both Ty Davis and APLifted bring an electric stage presence, and connect with their crowds with dynamic beats, powerhouse lyrics, and a vibe that sets the mood for any great evening of hip-hop. Between the two, Bottle Kids has shown that they can bring crowds to their feet, keep them entertained, energized, and excited, and make the show go all night long.

Before they hit the stage at the legendary 7th St Entry later this week to perform alongside another local favorite, Lenerd, I had the opportunity to talk to both AP and Ty, and ask them a few questions about how they got their start, what roles they each play in Bottle Kids, and what we can expect from them in the near future!

MIM: To someone who has never heard you guys before, how would you describe your sound/energy?

AP: I’d describe our sound as pretty unique honestly. We don’t try to mimic anyone else’s sound. We just want to evolve our own. I mean we make records you can chill and vibe out to and also records you wanna mosh too…Energy wise I’ve heard people say we give off that MGK type energy. But honestly we just get on stage and try to get the crowd engaged and hyped as possible.

Ty:  I think our sound is always evolving. We don’t let ourselves get boxed in or categorized. We experiment with different instrumentation, tempos, topics, and whatever else will help us bend genres and stay interesting.

MIM: How did you guys meet each other, and what led to you guys working together and forming Bottle Kids?

Ty: AP spit me a few bars in the garage at a house party, and I could see the intensity in his eyes. It wasn’t necessarily what he was rapping at the time, but I could just feel his hunger to make this a lifestyle. Music wasn’t going to be just a hobby for him. That’s how I knew he was someone I needed on my side.

AP: We met at a house party like 4-5 years ago. Some of my homies told me he spit to so we just got to talking. Next day Ty brought me to IPR (Institute of Production and Recording) for a session and that’s when we started working together. After working together for a couple years we decided to form Bottle Kids. Just kinda happened honestly.

MIM: How do you guys split the duties in Bottle Kids? Do each of you have your own “specialties” within the group?

AP: I’d say there are certain fields we most definitely even each other out on. Ty engineers all our shit and produces a lot of it. I don’t do a whole lot of that. I toss in ideas here and there but he’s the mad scientist behind the boards. On stage I’m usually the “balls to the wall” type performer. And Ty just feeds off of that usually.

Ty: I handle the production/engineering side of things, but everything else is a collaborative process. We come to each other with ideas, and really value the other person’s input on it. We’re never scared to tell each other when something could be better (which is extremely important). AP likes to take the lead on stage most nights too. It’s a cool thing man, we have our strengths, and we use them how we see fit to make Bottle Kids a force.

MIM: Everyone that has seen you agrees that one area you guys excel in is your live performance; what goes into perfecting those skills, and is your live show something you practice?

AP: That’s dope. First off thank you! It definitely wasn’t always my strongest area. Really it’s just getting on stage doing it and getting comfortable with everyone looking at you whether if it’s 800 people or 10 people in the crowd. I mean we’ve probably done close to 75-100 shows the past 3 years we’ve been performing. But yeah we most definitely rehearse before shows. Have to be prepared when it comes to that cause if your not it’ll show on stage!

Ty: It’s one of those areas where there’s always room to learn & improve. I think we’re super aware of that, and it’s really helped us experience growth. We put hours of thought, and practice into our live performance, but it really comes down to us trying to cultivate the most entertaining experience for anyone in attendance. 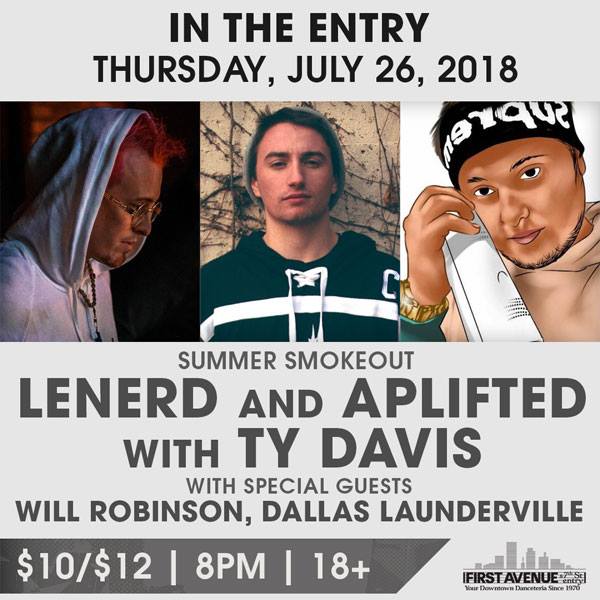 MIM: What is it like to perform at a venue like 7th St Entry that holds so much history within its walls, and do you have any other venues that you really enjoy performing at?

AP: Performing at 7th street is such a blessing. Words honestly can’t describe. Most def want to hit that main stage someday as well. As far as other venues we love The Cabooze! Hands down one of the best venues in the city.

Ty: My family has ties with Prince (my grandpa was his bodyguard during Purple Rain Era), so I fully understand the legacy & magic that building holds. I don’t take it for granted any time I’m under that roof. My other favorite venues are the Cabooze, and Amsterdam Hall in St. Paul. I just really like the layouts and vibes in those places.

MIM: What do the next six months look like for Bottle Kids? Any projects or shows in the works that we should keep an eye out for?

AP: Well we have a show Thursday, July 26th, which will be hosted by the legend Mr. Peter Parker from Go 95.3. We’re also working on our first Bottle Kids album. My brother Ty is going to be producing all of it. Don’t really have a set release date for that as of right now. But in the meantime, you can find our single “Deeper” and our solo projects on all streaming services! Ty has ARTeries out and I just dropped Vices a few months ago!

Ty: We’re working on our album right now. We’re just busting out new songs every week and building a vault of records. Eventually we’ll narrow it down to our favorite ones that sound good together and that’ll be the project.

Tickets and more information about Bottle Kids’ show with Lenerd, Will Robinson, and Dallas Launderville can be found here. Make sure to follow Bottle Kids on Facebook and Soundcloud as well to find out when they are dropping new music!