February will be eventful for indie/folk duo The Twins of Franklin. Both Laura Lou and Becky Shaheen celebrate birthdays, they’ll be releasing their first music video through City Pages, and they’re performing at the popular Big Turn Music Festival in Red Wing.

The icing on the cake, though, comes with the release of their album Low on Valentine’s Day, with the official release show on February 20th at the Icehouse. It will certainly be a month to celebrate love, success, and being on the cusp of something big.

The Twins of Franklin formed in 2017 after regularly being mistaken for actual twins. As best friends and each other’s solo backup singers, they embraced the title. Their long friendship and collaborations have developed into tight, delicate vocal harmonies that continuously shine through their music. I sat down with them to discuss the important month and find out how hard it is to find free pianos to destroy (spoiler alert: it’s not very hard).

Smouse: We’re sitting here at the Icehouse, where both of you have a bit of history. What made you choose this venue as the destination for this album release?

Laura: Becky released Serial Dream here and had such a good experience. I think we knew how this space is so conducive to our size and the amount of people we can pull out. Also, the sound engineers here are maybe the best of the cities.

Becky: I think that they’re very attentive, quality sound engineers. This space is also a good sounding room and I’ve always had a good time playing on the stage. I’ve only ever been to shows that I have loved here.

Laura: And it’s also blocks away from Franklin and very close to the apartment that the name is inspired by.

Smouse: The last time we talked for Song-Telling Tuesday, you shared a bit about the team behind your recordings and two of the songs, “The Rope” and “Lonely to my Bones.” Talk to me more about the process of recording this album and the people involved with it.

Becky: I think the album is a little unique and interesting because we had two separate producers working on different songs. So Brian Casey did four and Bryan Shackle did the other four. Genre-wise and (in regards to) feel, it’s a little bit all over the place. Going into it was a risk, to do it like that, because it could’ve ended up being all over the place in a bad way that wasn’t very conducive to listening through it. But the total vibe of the album is so cohesive. The finished product, how we got the producers to finish the sound, has a nice encompassing arc. The payoff is good.

Smouse: Who made the decision on which artists and people to bring into the project?

Laura: I feel like our producers really led the charge. Other than that, we brought in Jillian Rae, who is a really prolific fiddle and violin player here. Bryan Shackle produced four of the songs and he works with musicians here and in Nashville. He has these good buddies that he was like, “this is a great person to have play on this track and I can promise you that they’re gonna do exactly what we want.” We are so close with both of them that they know us really well and they know the kind of sound we wanted. We would communicate some inspiration sometimes, like, we’d love if this song sounded like Lucius or we want this song to sound like Fleet Foxes.

Smouse: The album is certainly filled with different genres and different styles of songs, but when listening through, it all still feels like the same story. In putting these songs together, did one underlying message or theme come to stand out?

Laura: We just did a performance on the WCCO Morning Show and one of the anchors shared that they don’t hear enough songs about self-love but you hear a lot of love songs about romantic love. We’ve come into our self-awareness in a way that we’d never had in our lives and can talk about that, and even the struggles with self-love that we’ve had. I feel it’s romantic that we are putting it out on Valentine’s Day and many of the songs have those themes woven in them. How do you be nice to yourself? How do you really live into the kind of person that you are already? I would love that to be a feeling people get when they listen to it. Love yourself, gall darn it.

A Conversation about Low 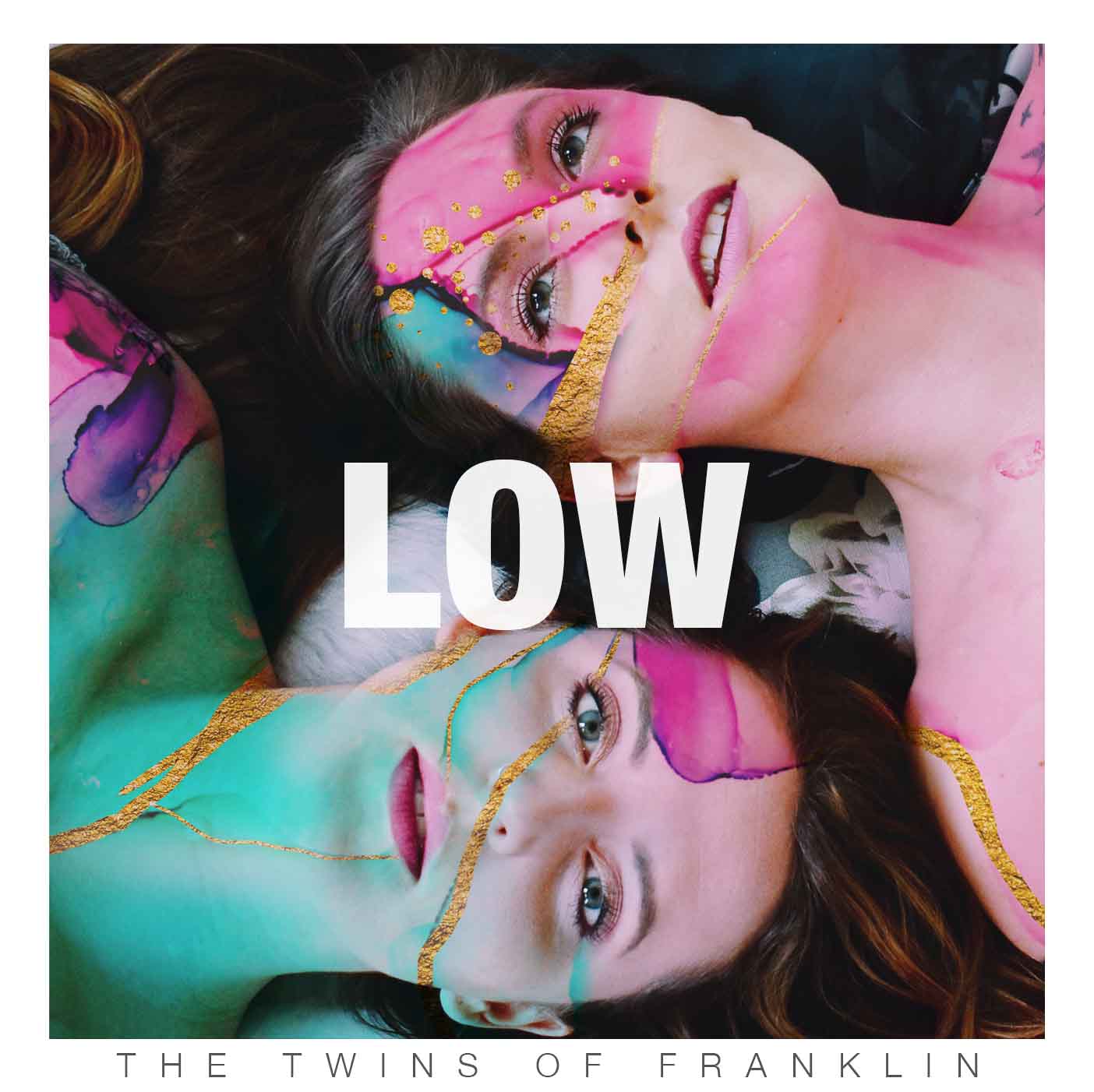 My first listen through Low was filled with surprises. It’s filled with traditional folk elements, with spouts of dance, pop, and even anthem rock. Each song takes you through a different lens and aspect of songwriting from The Twins of Franklin. It’s a journey that, much like the artwork on the cover, has plenty of colors. These include shiny streaks of naked vulnerability while understanding a bit more about commitment, self-love, and dedication through their eyes.

The album opens with “Low,” an acoustic song draped in reverb and open space. It’s a perfect introduction to the strong harmonies that The Twins of Franklin excel in.

Laura shares that the song is written about depression and the struggle of loving yourself. “I wrote that song in a low point,” she says. “I have this memory of feeling very down and sad. The hardest thing for me and my struggle with depression is feeling like I don’t have a good reason to be that way and feel that way.”

“What’s The Point,” the second song on the album, bumps in with a heavy dance beat and echoed vocals. It’s a bright, polished pop song with an even more colorful music video.

For the video, Becky and Laura found a free piano on Craigslist, hauled it up to a barn, destroyed it, and danced around the remains. “If you are having a hard day, you can find someone on Craigslist to give you their piano to destroy,” Becky jokes.

“When you listen to the lyrics of the song,” Laura says, “you can hear the frustration in the amount of energy and time that went into this relationship and it’s turned into a relation-shit.” Becky adds: “It’s really hard to pull yourself out of it and say goodbye. By the end of the song it sounds more joyful and affirming. This isn’t what I’ve been dreaming and this is not the life I imagined and that’s okay. And I’m moving on now.”

“Better Me” is another skillfully written and produced track. It feels like a flower slowly blossoming up and out as it progresses. The anthemic percussion and soaring guitars stand out and center the album halfway through.

The most relatable song on Low has to be “Doin The Work.” We can all compare our lives and feel like others get better opportunities than us. Laura reveals a deeper meaning with how she fact-checked her role with others, only to find a discrepancy.

“Hearing stories of other women, fems, and non binary people in my life who were fact-checking and doing all of this work and putting in more emotional labor,” she says. “It’s the frustration of not having somebody recognize the emotional labor that people are performing in your lives.”

The album ends with the sentimental bookend of “One Breath.” Written for the wedding of one of their best friends, the song has transformed in meaning for them. The core is about supporting each other and taking turns lifting each other up. For Becky, who is expecting their first child in June, the emotion behind “One Breath” resonates in her husband.

“It’s not just one day here, one week there, but he will be able to be that stronger person for basically the next continuing year of my life when I’m this new mom,” she says. “And I think that being able to carry that weight for so long is really massively overwhelming and amazing.”

Low is an album that explores self-love, lessons about relationships, and challenges that we all can relate to. It’s an album variation of the board game LIFE. Listening through the eight songs goes by too fast, but at the same time leaves you with everlasting lessons. There’s ups and downs and reasons to celebrate. It’s entertaining, yet deeper than it appears. And maybe somewhere along the way you pick up a kid or two.

Come celebrate a night of new music and intimate performances with The Twins of Franklin and Kara Laudon on February 20th. Tickets for the Icehouse are on sale now. Click here for $10 advance tickets.