Rock and roll has a history full of great artists. From the forefathers like Chuck Berry and Jerry Lee to legends such as Jimi Hendrix and John Lennon to more contemporary heroes like Courtney Barnett and Kevin Parker, the genre is no stranger to visionaries of every variety. In rock’s storied history, however, there are a few that have, more so than most, come to define and redefine what it truly means to be a great rock artist. One of these, of course, is David Byrne.

Known primarily as the former frontman of the Talking Heads, Byrne has carved out a decades-long and genre-defying career as one of the great innovators of not only rock music, but pop culture in general. Thursday night at the Orpheum, Byrne showed off every facet of his artistry, combining great songs from every corner of his career with elaborate choreography and impressive visuals, all of which conveyed his unique vision in impressive fashion.

The night started out with a fittingly creative opener. London’s Benjamin Clementine, an innovator himself, played an engaging, genre-defying set that captivated the audience, if not leaving some scratching their head. A pianist and singer playing what can be described as a sort of avant-garde electronic, classically influenced pop music, Clementine was accompanied onstage by a talented multi-Instrumentalist, and a mannequin, which appeared to be pregnant and wore only an American flag. I’m not the most experienced at interpreting visual art, but I can positively say I haven’t seen anything like it, especially in the context of a “rock” or “pop” concert. Clementine’ s music was just as interesting. Combining elements from a myriad of genres, Clementine and his onstage companion tore through their set, using drum loops and dexterity to navigate the complex, demanding, and occasionally funky arrangements.

The most impressive instrument on the stage, however, was Clementine’s voice. It was powerful and flexible enough to handle the difficult songs. The performance was ambitious, as would be expected from anyone affiliated with David Byrne. It had everything you could ask for from an opening act, and then some. As interesting as the act was though, it was still just an opening act, the appetizer to the delicious main course that was to come.

Transcendent is, arguably, an overused term, a go-to for many (myself included) signifying an experience with meaning beyond the here and now and day to day, often with spiritual connotations. This is as true in rock discourse as it is anywhere else, often associated with a great show, or experience, or a particularly captivating moment, like a shreddin’ guitar solo, an emotional vocal wail, or a timely hair flip. Yet despite overuse to the point of saturation, the word still carries a certain weight, and undeniably fits peak rock and roll experiences to the tee. With that said, truly transcendent experiences are, by definition hard to come by. This is even (or especially) true in the context of live music, where so many try so hard to foster such experiences. Despite this, paradoxically, some artists and shows seem to exude “transcendence” as if it’s a part of their very essence.

This brings us to the main event, David Byrne, musician and artist extraordinaire. A singer, songwriter, guitarist, and visual artist, Byrne has long been known for his well-crafted shows (think: Stop Making Sense) as well as his wonderful songs. All of this held true in his set at the Orpheum.

The show started simply, and sparsely, with only Byrne himself onstage. He sat at a desk, and held up a brain, singing through “Here,” off of his new album American Utopia. By the end of the song, his entire band had joined him onstage. All of the instruments were cordless, which made sense given how physically active the musicians would be for the entirety of the show. 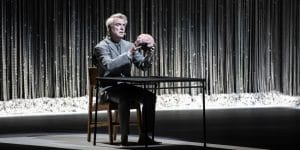 If “Here” previewed how the stagecraft would be going forward, then the next few songs gave an excellent feel for the musical direction of the show. Song number two was “Lazy,” an old electronic collaboration from the early aughts. It’s inclusion showed that he’d be pulling from every part of his catalog. The crowd wasn’t as familiar with it, of course, as they would be with his hits, but it was funky, and they loved it.

After “Lazy,” many in the crowd got part of what they presumably came for, a pair of Talking heads songs, “I Zimbra,” and “Slippery People.” In true talking heads fashion, they were very very funky. By this point, the audience was up and dancing, and the band was playing in full force, dancing around and executing the complex polyrhythms in the songs. It didn’t take long to realize that this was a special show.

“I should watch TV” was another surprise deep cut, this one from his collaboration with St. Vincent. At times, it had a hard rock edge, and at others, the band marched in sequence. It was unconventional and quirky, but it worked.

Another new song followed in the form of “Everybody’s Coming to My House,” before the familiar synth line of “This Must Be the Place (Naive Melody)” kicked in. It’s my favorite Talking Heads song, and The audience loved it, perhaps because they remained so faithful to the original. As much as I love hearing new songs and adventurous sonic experiments, there’s something awesome about the universality of hearing a massive hit live, especially when it’s as well executed as this one was. 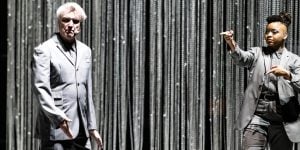 Of course, that’s far from the Talking Heads only hit, and it wouldn’t be the last one they’d play. In fact, the next song was arguably bigger. I’m referring to, of course, “Once in a Lifetime,” another of my favorites, and, in my opinion, one of the greatest songs of all time. The arrangement and execution on this version were typically stellar, but the song didn’t quite stand out relative to the rest of the show, something that says more about the quality of the show rather than any deficiency in the song or performance.

From there, the show continued on its steady clip of greatness. Fatboy Slim collaboration “Toe Jam” went over well, as did the next few songs, which included another Talking Heads favorite in “Born Under Punches.” Though each differed in style from the previous, they were all unified by the quirky, percussive, and funky sensibility that binds together David Byrne’s distinctive sound.

After a few more stellar tunes, including Jubilant American Utopia cut “Every Day is a Miracle,” Byrne was handed an acoustic guitar, at which point he played the signature opening lick from “Burning Down the House.” It’s not my favorite Talking Heads song, but it’s ubiquity and spirit shot the room further into the stratosphere. Simply put, it was another massive hit at a time when a hit was exactly what the show called for. 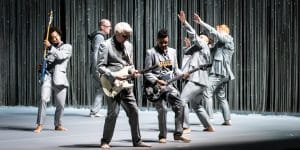 The final song from the set, Byrne said was from a musical he’d written some years back. I wasn’t familiar with it, but the theatricality of it went well with the choreography of the set, which was as excellent as you’d expect from an artist of his caliber.

The encores (all two of them) were hard earned, and gratifying in their own right. The first, “The Great Curve,” a Remain in Light deep cut, continued the deeply funky rhythms of the show and had the crowd on their feet instantaneously. It was the second, however, that was really memorable. A song/chant written by Janelle Monáe, “Hell You Talmbout,” consisted of members of the band singing off a list of names of black Americans killed by police. It was a long list, and Byrne remarked that he’d had to add names since the sing was originally released. It was a powerful and important gesture by a powerful and important artist, who could’ve easily just played another hit and left.

Greatness is a strange and fleeting thing. Not everything can be great, and most things in our day to day experience don’t approach that level. With that in mind, however, there are some things so undeniably great that they must be acknowledged, celebrated and preserved. Occasionally, something comes around that TRULY transcends the mundane. It’s our job to appreciate it when it happens. On this night, something great happened, and that alone is worth celebrating.