Three, that should be P!nk’s magic number on her third time here in 15 months. This time no Super Bowl, no colds, just a happy and 100% healthy Pink, giving it her all for a sold-out show at the Xcel Energy Center.

It was a night of death-defying acrobatics, pyrotechnics and choreographed dancing from one of the leading performers in the pop music world.

Starting the night by dropping down off a chandelier to “Get The Party Started,”  her show contained a few memorable moments and 2 new songs (“Hustle” And “Walk Me Home”) from her recently released album, Hurts 2B Human. 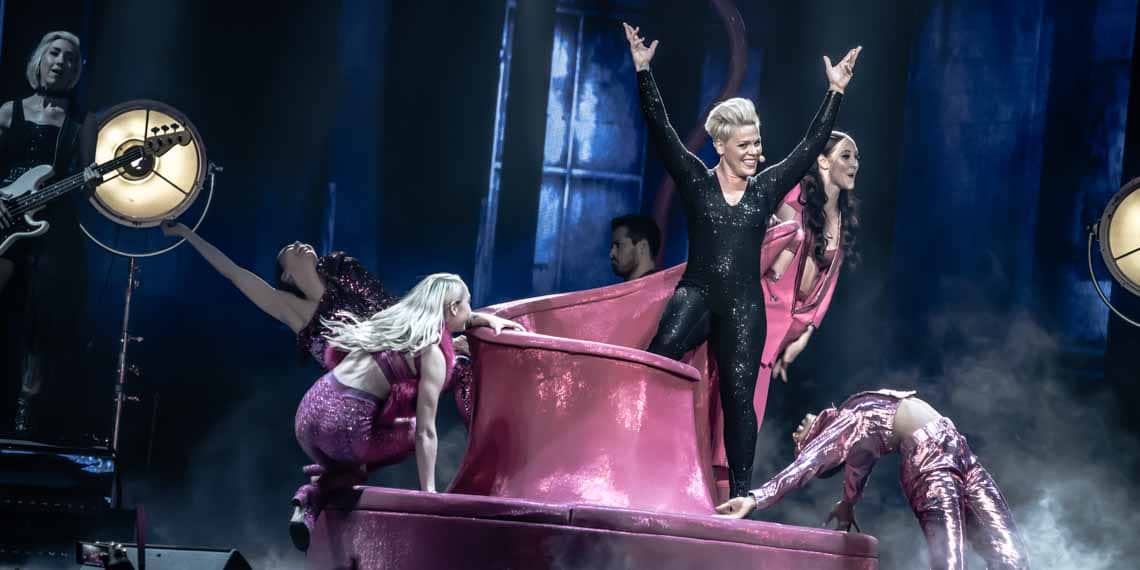 One song combined a funky combination of P!nk’s “Funhouse” and a cover of No Doubt’s “Just A Girl“. That combination wasn’t bad, it would have been better as one or the other.

Touching moment #1 came when Pink dedicated the hit song “What About Us” to the LGBT Community, the #Me Too Movement and Black Lives Matter.

Touching moment #2 came when Pink’s daughter showed up on stage midway through the song “Raise Your Glass.” Her appearance came after a short video where the young lady learned the lesson to ‘always be yourself, and be strong.’ She has the right mom for that.

The rest of the night belonged to several top hits and a little self-mocking on Pinks part. Interacting with a young lady from the crowd, telling the young lady “I wish was that cool at that age.” For some reason, I tend to think she probably was.

If you want to see a show as much as a musical performance, Pink’s show blends the two seamlessly. The two best combinations came in the form of ariel acrobatics. On the song “Secrets,” Pink and one of the male dancers went up for a poetic ballet in midair.

The last highlight just happened to be the final song, and it was worth the price of admission alone. On the song “So What” Pink was attached to cables and then launched from the V-style stage up toward the top of the Xcel ceiling. She circled the stadium while doing summersaults and walking on air. Just for good measure, there were a few platforms for her to stop and lead a sing-a-long to the audience before taking off again on multiple circles around the crowd.

Pink has to have one of the best shows in the nation and definitely the most demanding from a performer! It’s showmanship, athleticism and a ton of energy constantly on display.