I set out on a frigid January evening to attend a small show at Minneapolis’s Palmers Bar. Practically running to the entrance as to escape the cold, I finally arrived. I was greeted by an aloof door man who took my ID and then promptly returned it without once making eye contact. I walked into a small room that resembled a wide hallway with a stage, or rather the back corner next to the bar, where I saw the band setting up. I bellied up to the bar to grab a drink from the spunky bartender with fire-red hair while I waited for the music to start.

Glancing around to survey the room I found an interesting assortment of people but no more than thirty or forty of them, because as I mentioned, it’s a pretty tight space. The walls are filled with stereotypical dive bar paraphernalia which made me feel right at home. The show was said to start at 8 o’clock but as 8:45 rolled around there was no sign of music starting anytime soon.

I headed to check out the patio where you can find all the space the bar seems to be missing. I saw a glow from a dimly lit fire so I proceeded towards it. No one else was outside until a man appeared making his way to the dying fire where I was sitting. We made small talk as he began adding wood to the fire. I asked if he knew when the band would start and that’s when I found out the sound guy hadn’t shown up yet and they were waiting on him to get things going. I was forced to make my way back inside because I couldn’t feel my face or hands anymore. At last! The sound guy arrived allowing the musicians to get one last drink before heading to the stage.

I was there to see a band called Annex Panda, a three-piece, ground pop group from Minneapolis. The three members were easily noticeable as there are no hiding spots in this shabby joint. They seemed to be having as much fun as the intoxicated man next to me, nodding his head out of rhythm to the tunes playing in the bar.

Of the three members there is Eric who is the bass player, Michael on the guitar, and then there’s Jarod who plays the drums. Annex Panda made it onto the stage with a welcoming presence. Eric the bass player, and from what I can tell is also the lead vocalist, brings with him a smooth, rich voice that was pleasing to hear.

I fell in love with their sound. I thought to myself, this sounds like something from a Devendra Banhart album, but as they went further into their music, I couldn’t place them with anyone.

No doubt groovy is fitting word to describe their sound. Jarod’s hitting the drums with delightful enthusiasm and hair flips that would make anyone jealous. Michael adds a sense of calm to the stage keeping this three-piece wonderfully balanced. Eric’s vocals are never drowned out by the instruments being played and you can hear every detail they put into their music. This had me up and swaying along to their tunes. I was impressed with how great they sounded. Was the long delay of the sound guy that worth it or was this band just that smooth?

“Jackass” the title to one of their tracks is one of their super funky songs that will have you moving your feet in no time. Next, my ears were filled with a slow, enjoyable sound of a song titled “Axis Love” which I had briefly listened to prior to their performance. Hearing it live was more impressive than the recording. I feel their Bandcamp tracks, although still worthy, don’t do them justice. Eric then announced the title to the next song, “The Deviant Ones” which is the newest addition to their collection and is now my favorite.

They continued filling the room with their unique, dream like sounds for a couple more songs. As they wrapped up, Palmers went back to its usual business. 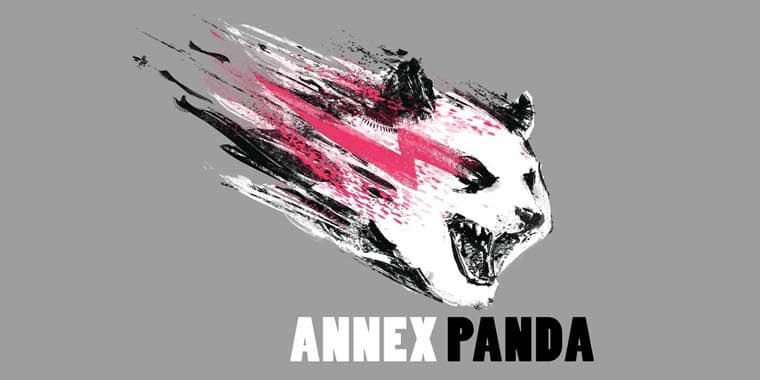 I was able to speak with the members of Annex Panda where we stood outside in the icy temperatures as to hear one another because the bar had once again become rowdy and loud. First, I had to ask the stereotypical question,

“Where did the name Annex Panda come from?”

which they told me they came up with just before their first show. In somewhat of a bind and after some word play, Annex Panda was created.

Eric and Michael met two years ago through craigslist and Jarod is Annex Panda’s newest member. They started off with another drummer but met Jarod and recently incorporated him into the band.

My next question, “what is ground pop?”

because after searching endlessly for a genre of music called ground pop and coming up empty handed, it was imperative that I get to the bottom of this. While explaining to me their sound wasn’t like radio pop, underground pop or anything in between, all three of them feel their sound is “ground level” and that landed them on the genre ground pop.

Listening to Annex Panda was like entering a trippy dream world mixed with funky grooves and inimitable tunes.

It is a sound that is difficult to describe but whatever the case, it’s a sound that’s working. My time was well spent checking out Annex Panda and I look forward to hearing more of them in the future.

Writer for Music In Minnesota

Writer for Music In Minnesota